Intensive, one to one, daily emotional work for profound and long lasting results in a magical setting

Best for: People who need to make positive health changes or fully recharge their batteries. Great for solos or couples.

Not for: Those wanting to be part of a sociable group – usually guests come alone or with one other person.

Nestled among Cognac vines in Southwest France, this luxurious and grand, 200 year-old house offers private, bespoke retreats for up to 4 people that pivot on a gourmet raw vegan cleanse, a range of intensive (one-to-one) emotional therapies, nutritional consultations and myriad ways to relax in the gorgeous chateau-esque interiors and grounds. Hosted by highly accomplished raw food chef Desri Goodwin and her partner Master NLP practitioner Robin, programmes are designed around the specific needs of each guest to provide holistic treatments and tools to create lasting life changes. For those who simply need to cleanse, de-stress or replenish their energy to those with deep seated emotional issues to lay to rest, this retreat provides the perfect balance of health and holiday. The food. Unless you already follow a raw organic vegan diet you are unlikely to have experienced anything quite like this before. An incredible range of dishes with a mind-blowing depth of flavours and textures. Less a catered retreat than a raw fine-dining experience brought to you by a private chef. Eat like royalty and feel like a picture a health.

Yoga equipment is provided but no yoga classes. These would be a great addition to the raw food and cleansing. If you would like some yoga (and don’t have your own self-practise) you’d need to ring in advance and a local teacher can be arranged.

Read or write a guest review

Have you been on this retreat?

Come here for your very own private retreat. Everything is on offer from healthy holidays and cleanses to tailor-made therapeutic programmes for health, weight-loss, addiction and trauma recovery. Enjoy treatment rooms, a private pool, infra-red sauna, jacuzzi, the magnificent house, grounds and surrounding countryside. In addition to eating clean (raw, vegan, organic) and delicious food, you can learn simple and workable techniques to improve your diet with dedicated nutrition and raw food workshops. You’ll also receive an introduction to natural detox methods such as tongue-scraping, oil pulling and dry skin brushing. The retreat specialises in the Journey-method of Neuro-Linguistic Programming (NLP) with host Robin Goodwin, a practitioner of almost 20 years. NLP is used to access the subconscious and create new, healthy connections for the brain and body. Discover things that hold you back or address much deeper issues. Complemented by life-coaching, hypnotherapies, guided meditation, Emotional Freedom Techniques (EFT) and Omni-healing. Swim in the outdoor 12 metre, heated pool, use the sauna and jacuzzi, walk in the forest and among the vines, go for a run or a bike ride, use the yoga equipment or rebounders. Be as active or passive as you like. Pursuits such as horse-riding or wild swimming can be arranged upon request. Enjoy homemade, raw food treatments for the hair, face and body. Think luscious bath salts and a papaya face mask so delicious you will be tempted to eat it. Use only natural organic shampoos, conditioners, cleansers, toners, moisturisers and face masks for the duration of your stay. Then wrap yourself up in Egyptian cotton sheets. The Chateau also offers 3 night wellbeing workshop retreats on set dates for 4 to 6 people, with the option to stay longer if you want.  They include delicious, clean, vegan juices and meals, a one to one session each with Robin working on what ever you like (sleep, stress, past issues, allergies etc), use of the pool, sauna, and walks. All workshops cover learning techniques, making and tasting recipes. There is lots of advice and plenty of opportunities to ask questions, and there are options to cover different themes such as Spring Cleanse and Gut Health, Upgrade Health & Downgrade Inflammation, and Prepare for Winter & Boost Immunity.

Perfect for a family or group of friends to learn how to have a healthier attitude to food along with easy substitutions for a healthier diet – and have time to have fun by the pool and relax too. 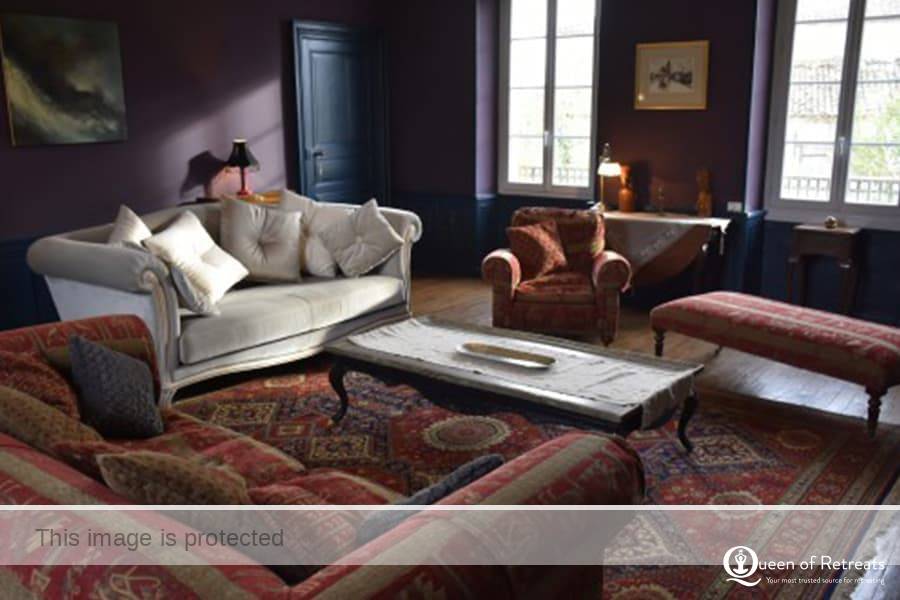 For those who want a follow up to the retreat or who cannot make it out there and don’t want to travel, the team offer Stay At Home retreats where they work one to one online (for about 3-4 hours a day) via skype or similar together with emails. They work with two people at a time, so places are limited to 4 people a month.

The team will cover whatever people need, which mostly turns out to be emotional support. They use a combination of NLP, trance work, hypnosis, life coaching plus a raft of other things such as EFT, The Sedona method and other self care teachings mainly to do with cleansing. They have worked with people who have suffered abuse, anxiety, loss, depression, burnout as well as people needing or wanting to lose weight, find themselves again, heal from various illnesses (often auto-immune related), substance abuse, self harming and to generally improve their life.

Stay At Home retreats are £1,900 for 5 days either consecutively or spread over a few weeks, consisting of 3 – 4 hours of one to one therapies a day via skype, plus extensive advice and information via email. One off consultations, via skype, of 2 – 4 hours are available £105 ph. There are two sprawling master bedrooms used for the retreats, each with a large ensuite featuring a luxurious free-standing bath tub. The décor is classic French country style and entirely befitting of what is a very grand, 200 year-old house. Resplendent with wooden window shutters, crystal chandeliers, dramatic drapes and chaise longues. The house has two large sitting rooms and when both bedrooms are booked each effectively has its own private lounge (if you’re there alone you can take your pick). You can expect vast, comfortable sofas and all mod-cons for those who like to Netflix and chill. There’s also a sizeable collection of books and DVDs. Other places to stay

Those with a penchant for glamping can enquire about a tepee with a wood-burning stove.

Spend time getting to know your hosts – Desri and Robin’s experience and enthusiasm will inspire you. Go for walks among the forest and the vines and feel the connection with the place. Switch-off or keep the use of your tech to a minimum, you will not need or want the outside world.

It’s wonderful that the swimming pool is kept chemical free but this means you can’t wear sun tan lotion in the pool. It can be really hot there. If you are fair skinned and have a tendency to burn make sure you swim in the early or late hours of the day.

April through to October offers the best of the weather but the beautifully furnished house makes for a very cosy escape in autumn and winter.

The house is fronted by a small terrace and situated in sizeable, well-kept grounds with a diverse range of places to sit, eat, chill or workout. There are fruit trees and vegetable gardens and the grounds are surrounded by a beautiful forest and endless vines. One of the barns has been converted to provide an open-sided covered living area. It includes a dining table, sofas and plenty of space for gym and yoga equipment. Perfect for when the sun is it at hottest. The outdoor, heated pool is situated in a beautiful part of the gardens and there are sun-loungers on the terrace. There is a state-of-the-art, therapeutic, infra-red sauna and an excellent massage chair to use in the house.

There are lots of beautiful places to eat, from breakfast on the terrace, lunch by the pool to dinner in an outdoor dining room. You can also eat in the house, but eating outdoors heightens the senses.

You’ll be served raw, organic, vegan dishes for breakfast, lunch and dinner, made by your host Desri Goodwin, a highly accomplished raw food chef who uses as much home-grown local produce as possible. From simple dips, dehydrated crackers and bountiful salads through to artisan raviolis, lasagnes and cheesecakes – all of it miraculously raw and unprocessed. Additional smoothies, juices and filtered water provided throughout the day. Alcohol and caffeine are not provided by the retreat, but the policy is flexible for those whose holiday depends on it. The house, barns and gîtes have been lovingly restored by the owners re-using as many of the original materials and retaining as many original features as possible. The retreat makes as much use of recycled and re-usable products as they can, and the food is sourced as locally and organically as is humanly possible. Rainwater is collected and food waste composted.

Bordeaux, La Rochelle, Limoges and Poitiers are all around a 90 minute drive. Bergerac is 2 hours away.

Angouleme is 20 minutes away and easily reachable on the Eurostar (via a platform change in Lille or station change in Paris).