Loosening up on a commune with Yoga on a Shoestring on La Gomera, The Canary Islands

Sharon Walker reviews this enriching yoga holiday at Finca Argayall on La Gomera in The Canary Islands and finds an experimental community, a chef to fall in love with and wondrous yoga with the sparkly Lisa Powell

It takes a bit of effort to get your self to the Yoga On a Shoestring venue in La Gomera. A flight. A taxi. A boat. Another taxi. So a journey, but worth it. I’ve never much fancied the Canary Islands before, too many Brits for my liking, but Finca Argayall is a million light years from the burnt beer bellies and the crowded concrete of South Tenerife; a secluded palmed oasis cradled between soaring volcanic cliff and the inky Atlantic, at the end of a dirt track. It’s a unique spot and unique set up.

The Finca Argayall (which means place of light) is home to an experimental community that was built on the ideals ‘live, laugh, love’ by a group of Osho disciples back in 1986. More recently they have opened their doors to outside guests, mostly retreat groups like ours, though you can book a room if they have a space, which mostly they don’t because it’s incredibly popular. (Two of our group were back for a second time, another guest was here for her thirteenth.) You can see why. The location is spectacular.

A tour of the property, by one of the 22 permanent, mostly German, residents, reveals a lush permaculture garden, palms, papaya trees, mangoes (the finca was once home to a mango plantation), several types of cacti, and red hibiscus flowers, in all around two hundred different species of plant. And a fish pond. It’s in the midst of all this that I find my little jungle garden hut, which, despite being the cheapest accommodation, is my favourite, with its double bed in the middle of the room and my own little private garden. It wouldn’t win the Farrow and Ball prize for interiors and, like much of the finca it’s a little bit scruffy, but it’s mine and I love it. 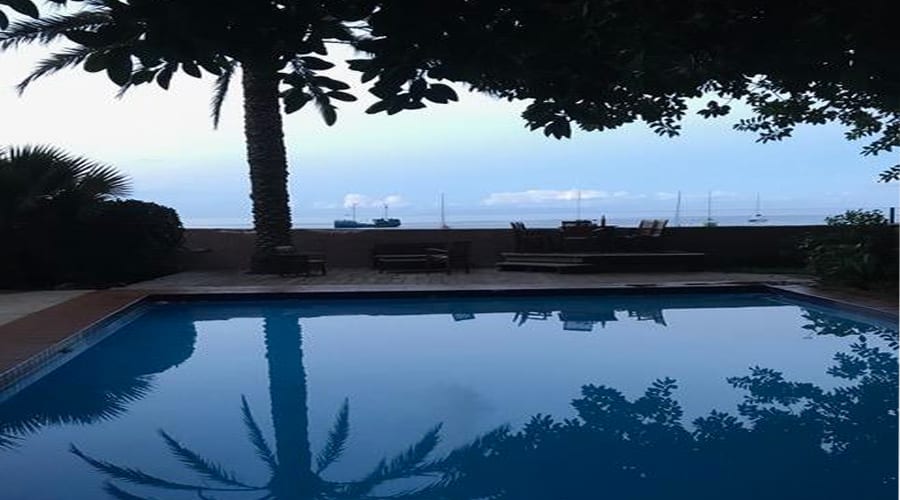 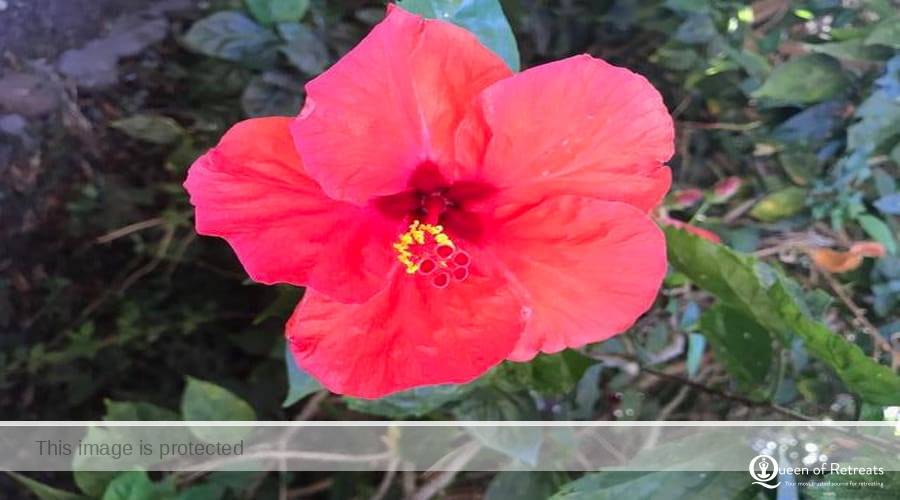 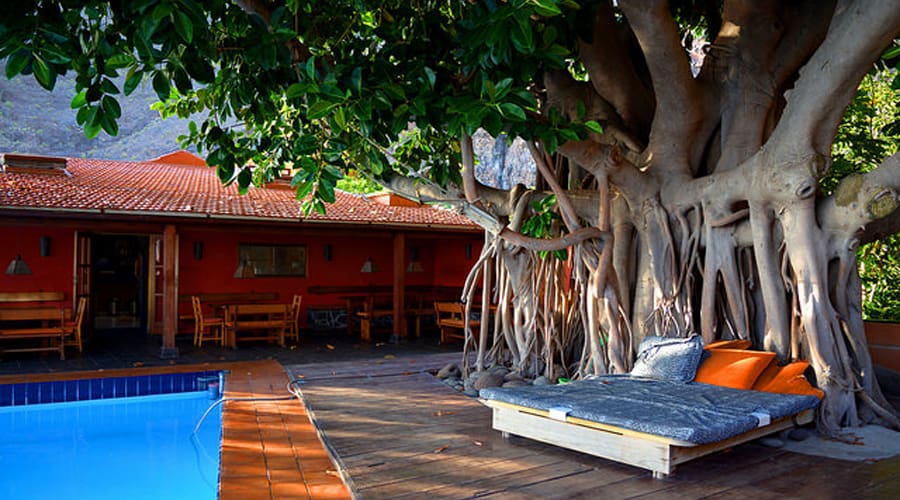 Before heading off to unpack we are told the deal on recycling, the honesty bar and meal times. We are expected to follow the rules and to clear our own plates, which seems fair enough. I’d expected to join in the cooking and washing up rota, as I’d done in another community moons ago, but this place runs more like a hotel with the permanent residents on cooking and cleaning duty and the rest of us sunbathing on the terraces in front of the water.  But it is not a hotel – and we are told not to expect hotel service – the ‘crew’, as they refer to themselves, are residents, not staff, with their own foibles.

Be warned that there were a fair few smokers amongst the finca residents, and plenty of puffing around the coffee bar and pool, which might be music to your ears if you’re a smoker, less so if you’re not and on a yoga holiday. There are also quite a few sweet dogs (three live at the finca, others come in with visiting workers), which we are told not to feed. No one mentions the bottoms, of which there are also quite a few. Naked male bottoms, that is, belonging not to the residents but to other finca guests. I did my best not to giggle like a typical Brit, but others in our group wished they’d put on their pants or take themselves off for a stroll on beach, once the gong sounded for lunch.

The food, by the way, is abundant, delicious and a little too good. (Can you really get fat on vegetables? Apparently you can if it’s help-yourself buffet and you are greedy like us). We fell head over heel with the finca head chef, who takes his craft  that seriously he has had knives and vegetable tattoos inked on each arm.

‘I ignored my Fear Of Missing Out impulses to sink into the incredible nature at the finca, to lie by the pool in the shade of the enormous Banyan tree and swim in the inky Atlantic’

The days followed an easy routine with Yoga on a Shoestring’s sparkly instructor, Lisa Powell, taking an hour-and-a-half class at 8am, in the large hexagonal yoga sala, then it was straight to a delicious breakfast at 9.30am. (Don’t hang about or you’ll miss it!). The yoga was restorative, tantric, mindful. We slowed right down, dropped into our bodies and worked our way through the chakras.  To my amazement I mastered the daily yoga nidra (a yogic ‘sleep’ where you are awake but deeply resting), without nodding off or snoring, which is harder than it sounds. One day we held poses for three minutes, the next for four (also harder than it sounds).

My favourite session was the partner work, which was really fun, but also a great way to stretch.  Each day Lisa gave us some thoughts or intention to mull over and journal on. We started with the root chakra: ‘How secure do you feel? Are you secure in your home? And your relationships? How secure is our relationship to money?’ and progressed through all of them during the week. Our evening yoga, which started at 5pm, clashed with sunset, which no one wanted to miss, so Lisa finished the class with a meditation in front of the water, which was magical. ‘Notice the constant coming and going of the ocean,’ she urged. ‘Are you pushed and pulled by your likes and dislikes? Ride waves and notice how that feels.’

There were activities laid on by the community too which, as finca guests, we were invited to join at no extra cost. I made it to morning Vipassana (silent meditation) a couple of times and was rather thrillingly given the responsibility of sounding the gong when it finished. There was a fantastic Antarctica slide show from a marine biologist, one evening resident Marco gave us a sound bath, and on another Lisa organized a fire ceremony in front of the ocean and surprised us by playing the digereedoo. 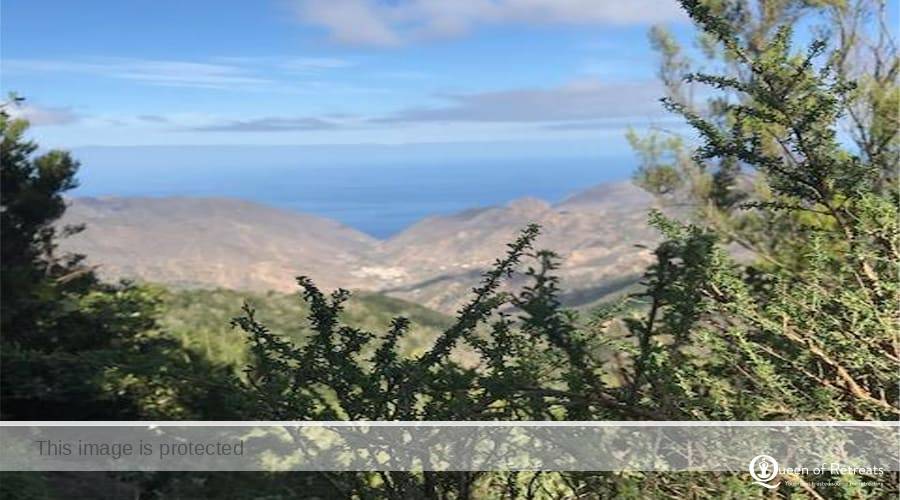 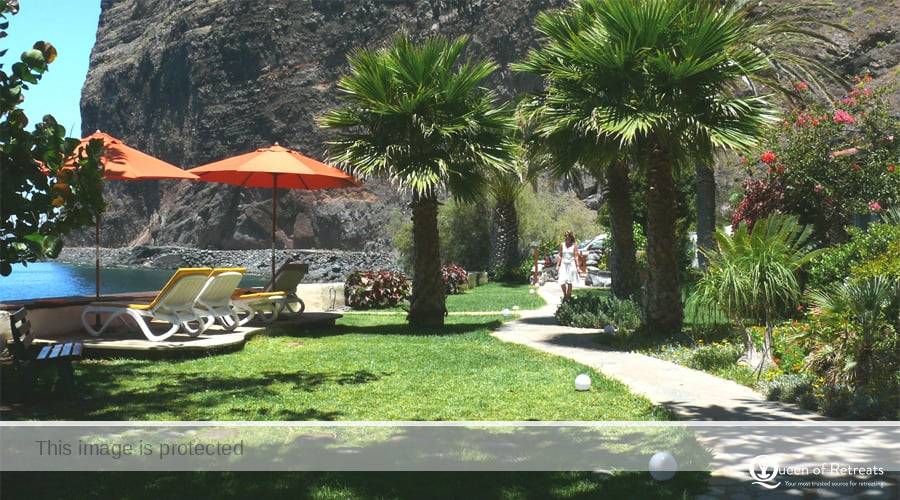 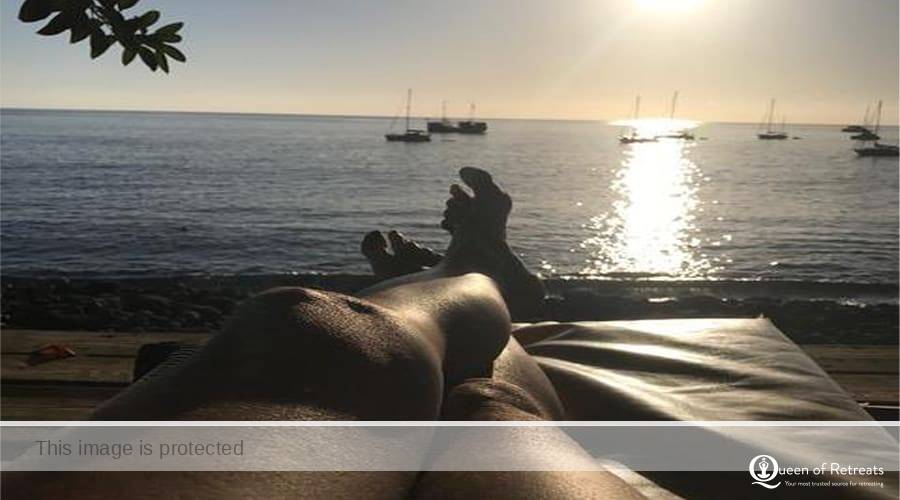 I’d planned on hiking, biking and exploring the island, but instead ignored my Fear Of Missing Out impulses to sink into the incredible nature at the finca, to lie by the pool in the shade of the enormous Banyan tree and swim in the inky Atlantic. The water was warm and calm – this was at the beginning of November – though I’m told waves can be wild in winter.  Every day I’d walk past the hippy camper vans parked up on the road, then pick my way across the stones, not little pebbles but big stones verging on boulders, and swim out to the rock in the bay. To my shame I never made it to the pirate boat, which was anchored in front of the retreat all week, but the stronger and more inquisitive swimmers in our group did and came back with reports of a group of artists, talking in poetry and wearing glittering, velvet coats.

Cutting out the buzz of technology – there’s no internet reception here – helped me to block out that humdrum inward-looking spiral of my mind to focus on outside myself and on the beauty of the surroundings.  We were 18 guests in total of varying ability and ages – though the men were outnumbered three to one were in their thirties while we women were edging towards midlife.  The combination of psychiatric nurse, artist, sign language interpreter, former care home manager somehow produced a chorus line-up to rival the cast from Mama Mia and conversations that veered wildly between goddess cards (which Lisa produced at most meals), music and relationships.  We weren’t quite living as community, but I was soon finding it hard to imagine life without my little finca family.

By the end of the week, however, I did have the uneasy sense that we were pushing our luck with our hosts, some of whom seemed to have been trained in the Basil Fawlty school of guest relations (you’ll soon hear about it if you swipe a lone banana before the allotted breakfast hour or forget to clear away a wine bottle). Don’t, however, let this put you off – for all its foibles and quirks the finca is still right up there as one of my favourite retreat locations. Just don’t expect five-star service.