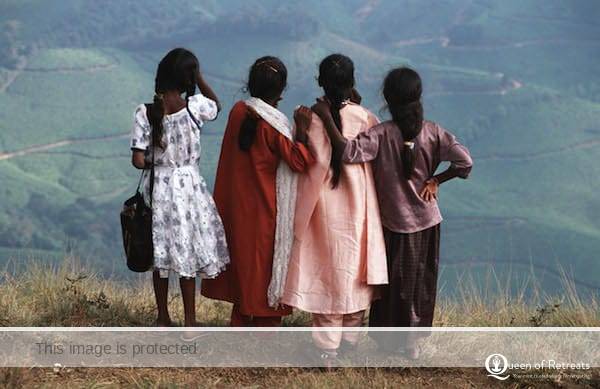 I read in The Week that a ‘good samaritan’ has been giving envelopes full of cash to the needy in the German city of Braunschweig. So far, the anonymous donor has given 190,000 euros to individuals and organisations, including a hospice, a robbery victim and a vicar – the money often comes wrapped in a cutting from the local newspaper about the recipient’s plight. Apart from feeling the urge to drop him a line and ask him if he could spare a bit (only joking, not), this lovely story reminded me how it’s often the kindness of strangers that saves us in unexpected ways, and how difficult it often is to be kind to those we are closest to.

There is a little card I carry around in my wallet with a quote on it by Sri Chinmoy, a spiritual teacher from India. It reads: ‘The very nature of kindness is to spread. If you are kind to others, today they will be kind to you, and tomorrow to somebody else’. I think I chose it not because it is beautiful, but because being kind isn’t always easy when dealing with others in the course of a normal day. When I’m preoccupied with my own frustrations and tensions, I need a regular reminder of that gentler part of myself.

This isn’t because I am trying to be good or moral, but because when I am kind to people, I feel a greater sense of wellbeing than when I am not. I’m not talking about being over-emotional or over-sentimental, but about imagining what it is like to be someone else and to respond accordingly. To realise that the other person is actually just like me – even if they are buried inside a social mask I can’t quite make out.

Using our imagination to empathise and sympathise with others, and the opening out in ourselves it creates, is a great, if not crucial, way to connect with others and feel part of a better type of world. I agree with the philosopher Alan Ryan, who says that the happy life is one that reflects that ‘we mutually belong to one another’. Yet in contemporary society, kindness is more often than not seen as a hindrance to having a successful life.

The joy that kindness can give us – and just how much we have become disassociated from it – is explored in a little book called On Kindness (Hamish Hamilton), co-written by the psychoanalyst Adam Phillips and Barbara Taylor, a feminist historian. Not only is the pleasure of being kind ‘fundamental to our sense of wellbeing’, the writers believe, but a person’s kindness is actually the ‘strongest indicator’ of their wellbeing.

‘Every person, in some part of himself, knows that feelings of connection and reciprocity are among the greatest pleasures that human beings can possess’, they write. Yet according to contemporary feeling, the ‘dependence’ kindness entails is best avoided if we are to get on’. In reality, of course, ‘getting on’ in a capitalist culture often means working too hard, feeling anxious and living a life that is disconnected from others.

It isn’t that people have become less kind, but rather, society that has made us less able to express it. ‘People are leading secretly kind lives all the time, but without a language in which to express this, or cultural support for it,’ says Phillips. Aggression and cruelty come naturally to us too – and in a society that values competitiveness too highly, it’s not surprising that these behaviours overtake our better instincts more than they should. Kindness becomes something that is only usually expressed between a parent and a child, or an adult caring for a sick or elderly relative.

The solution is to realise that kindness strengthens rather than weakens us – even in intimate relationships. ‘It’s dependence that actually makes self-reliance possible,’ says Phillips. Even Charles Darwin, the champion of individualism, strongly rejected the view of mankind as primarily selfish. ‘Rather, he argued that sympathy and cooperation were innate to man and a key part of their success’.

Doing things for other people rapidly takes us out of our heads, and the busy wave of thoughts that often don’t serve our sense of wellbeing. It can also be a great motivator – a friend of mine says training for a charity bike ride was the main reason she bothered to keep fit for the rest of the year.

Kindness isn’t just about other people. Author Dr Wayne W. Dyer, in his book, The Power of Intention, reminds us that being kind relates to the self as well as others. ‘Treat yourself and others with kindness when you eat, exercise, play, work, love and everything else’, he says. ‘When you think, feel and act kindly, you hasten your ability to connect to the power of intention.’

When you are kind to others, Dyer says, you should ‘expect nothing in return – not even a thank you’. Rather, trust that ‘the universal, all-creating spirit responds to acts of kindness with the response – how may I be kind to you?’ Even if you’re a little scared by the thought of an ‘all-creating spirit’, try it – next time somebody pushes your buttons, take the less obvious route, react with kindness, and see what happens.

Being kind can be connected to being mindful of the things and people around you. Read more about mindfulness in our journal.