Waking up to the miracles of life at Zen Rocks Mani, Greece 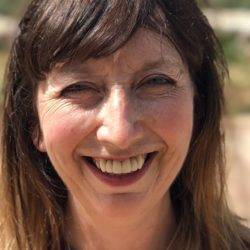 Despite having a yoga inspired business and spending half my life writing about yoga, I was stressed and out of shape – feeling every one of my 55 years – when I arrived at Zen Rocks Mani. After months of back-to-back projects I’d put on several pounds and was feeling very disconnected from myself – just a head bobbing about on a locked down body. My husband was the walking wounded – still recovering from a frozen shoulder that had begun with the terminal cancer diagnosis of his younger brother. We were stiff and out of sorts with ourselves, and life.

Neither of us had heard of Zen Rocks’ founders Vivi Letsou or Eraj Shakib, but when we discovered that she was the creator of Abhaya Yoga (a yogic path that seeks to align us with the wisdom of the heart), that many of our fellow retreaters were yoga teachers, that she’d trained over 200 more at her thriving yoga studio in Athens, and that Eraj had founded Avocado, one of the city’s first and most successful vegetarian restaurants, it was clear that we were in the presence of greatness.

Zen Rocks is intended as the physical manifestation of all this accumulated wisdom; “a space where we can relax and heal our relationship with ourselves, the earth and all beings – human, animal and plant.” And it is. Whether I was taking in the ocean sunset, sizing up the buds on the gnarly olive trees, inhaling the scent of rosemary and lavender diffused by the plentiful bushes, or cupping hands around a mug of saffron yellow turmeric tea, I felt as if I was re-awakening to the beauty of life, experiencing a presence and sense of connection that had been missing for years. 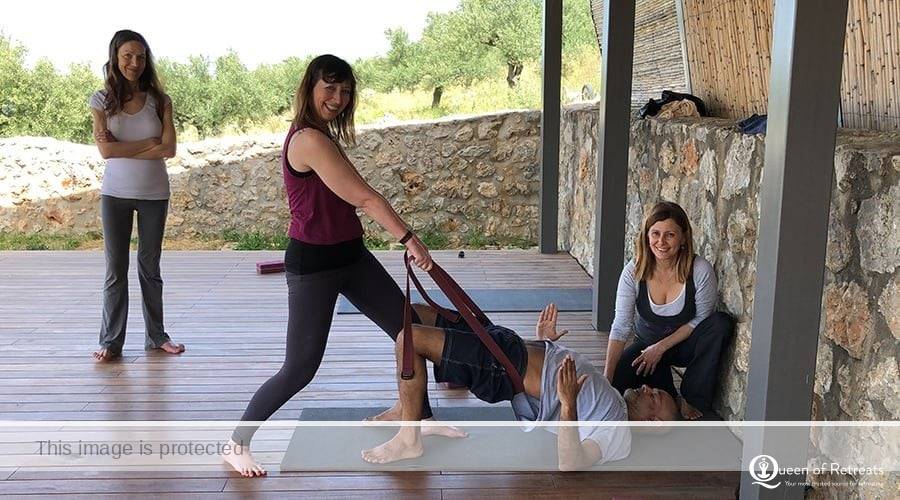 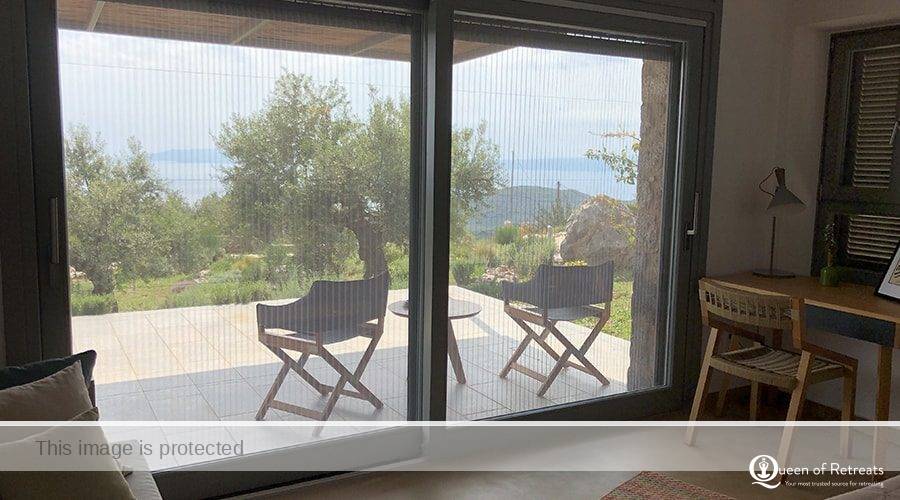 Despite these bountiful gifts of nature, and despite the fact that the cold weather meant practicing in the simple indoor shala rather than on the glorious yoga platform overlooking the sea, my favourite time was yoga time. Drawing on the rich traditions of Zen Buddhism, Tantra, Ashtanga, Anusara, Bhakti Yoga, BASI Pilates, and Meditation, Vivi took us on a journey of self-discovery; enabling each of us to find our own way to stillness, strength and courage.

She was with each of us every step of the way – but this didn’t mean we were in for an easy ride. She challenged me physically, emotionally and mentally, exhorting me to open up parts of the body that had been in lock down for years. I found a whole new section of my lungs that hadn’t been used since I was five years old, I got up into handstand twice (which is precisely double the number of times I have done it before), and thanks to some very special adjustments my half hanumanasana became a passable three quarters.

‘My husband’s frozen shoulder had defeated the medical profession for years, but it melted with yoga therapist Vivi’s carefully executed exercises, and through that release, his joy for life flooded back. I wept when I left.’

Vivi has particular expertise in yoga therapy – somehow able to read your mind through your body – adjusting anatomical details to tune the chords of your soul. My husband’s frozen shoulder had defeated the medical profession for years, but it melted with her carefully executed exercises – stretching and strengthening on the breath – and through that release, his joy for life flooded back.

With the love and compassion she shows for all beings, it’s no wonder that she attracts such a loyal following, both human and furry. As Vivi herself likes to say, “happy beings attract happy beings”. Her dogs waited patiently outside the shala door every day. They gave generously to guests too – giving us a hero’s welcome when we arrived, walking with us by day, curling up to us by night, surrendering their tummies for tickling after every meal.

My second favourite time of day, after yoga, was brunch. Let’s face it, nothing says “the good life” more than gathering around a Greek table under an olive tree. The trays laden with sweet and savoury spreads, spices and local honey, the plates heaving with olives, capers, luscious tomatoes and feta made by a local farmer, the artichokes, the garlic, the pulses and beans – all proof that, as Eraj says, “You can have a wonderful meal without killing an animal.” 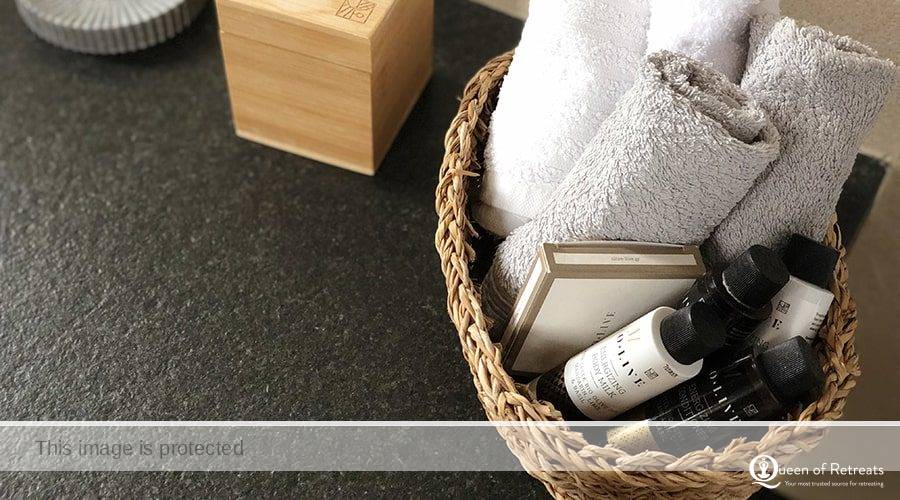 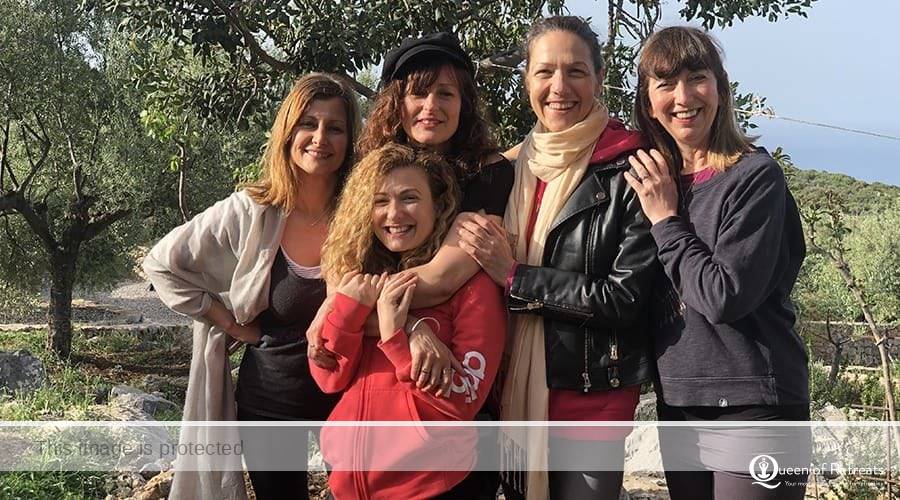 And it wasn’t just the food that was good for our bodies and our souls. So were our fellow guests. We broke (rye) bread with a young Zurich based couple – both hospital doctors, two Athenian women, one in her thirties – a dance and yoga teacher, the other a forty something yoga teacher turned nutritionist and, last but not least, a woman after my own heart – a Brussels based sales assistant and yoga teacher who specialises in yoga and raw chocolate workshops for “chocoginis”. Conversation often centred around tips for healthy living – from herbs for menopause (spirulina, maca and lucuma) to the recipe for vegan chocolate mousse (avocado, raw cacao, dates, vanilla and coconut nectar).

The architecture of the place has a similarly healing quality; the honey stone walls and terracotta roofs of each villa, the seating area around the fire pit, the traditional Greek urns filled with riotous flowers. Our all-mod-cons bedroom was earthy and calming, olive and brown cushions beneath a framed triptych of olive trees, an exposed stone wall and polished concrete floor. Every morning we would slide open the floor to ceiling windows and step onto our terrace. In front of us stretched hundreds of sacred olive trees, that ancient symbol of peace and friendship, and in the distance, the majestic sea filled the horizon – an infinite possibility that always inspired us to breathe deeply.

I wept when I left. Proper heaving sobs for the love that had grown inside of me. For the real sense of connection I had – to myself, my husband, my fellow retreaters, Vivi and Eraj and their four legged bodhisattvas. For rediscovering my sense of being in the moment. For the ease in my body and the gratitude in my heart. I will always relish the memory of walking the deep red earth of Zen Rocks, where I awoke to the many miracles of life.