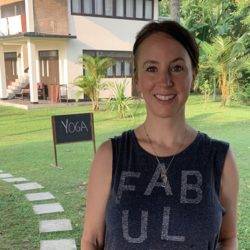 Pat McNulty reviews a wonderful yoga holiday with Yoga Explorers at Talalla retreat in Sri Lanka and finds magical gardens, a lush closeness to the ocean and exceptional heart-opening yoga teaching with Jim Tarran and Khadine Morcom of Vajrasati Yoga.

I was initially tempted by Yoga Explorers Sri Lanka because I was looking for the thrill of adventure exploring a new tropical island I’d not yet visited. But as I researched Jim Tarran and Khadine Morcom of Vajrasati Yoga who’d be teaching the retreat, I became just as excited about the exploration we’d be doing on the mat. I wasn’t disappointed, on either count.

The first evening saw us sitting down to share a cheery dinner – with the biggest yoga group I’d ever been away with – 22 in total. It was also the most diverse in terms of walks of life. A nurse, a judge, a financial advisor, an HR manager, a top foreign office civil servant and a chef were among the people around the table, which made for excellent mealtime conversation. None of the attendees had happened upon this holiday by accident – all were there because it was Jim and Khadine teaching.

Jim’s classes are peppered with nuggets of vedic wisdom, yoga history and Sanskrit mantras, and he chatters lightly as he helps everyone self adjust. The only time there was hands-on adjustment was at the end of the class during savasana, which was a revelation. Who knew I’d been holding onto quite so much tension doing an impression of a corpse?

A yoga and surf retreat called Talalla is the setting for Yoga Explorer’s retreat, originally set up by an Australian surfer who fell in love with Sri Lanka. It’s impossible not to share her enthusiasm for this magical country, and she’s created a beautiful space in which to experience it. The grounds are vast, lush and punctuated with the types of flowers I can only dream of growing in my London garden – orchids sprout from the trees, a hibiscus tumbled with yellow flowers outside my hut door and the green lawns stretch all the way to the beach. Look up and you see palms, fiddle leaf figs in their natural habitat and enough tropical greenery to keep a lot of exotic birds happy. 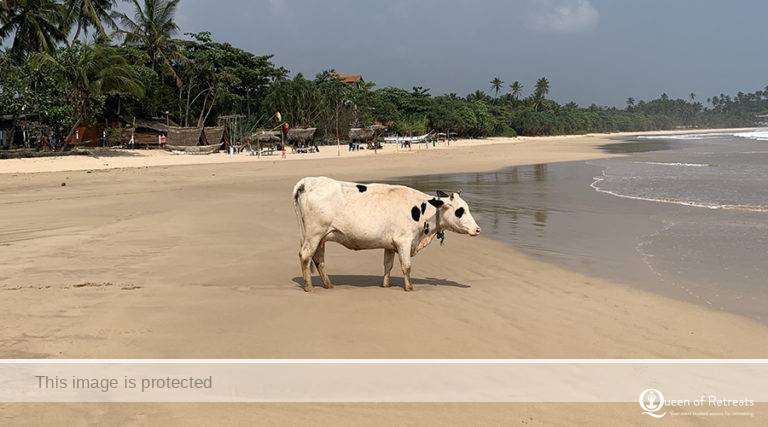 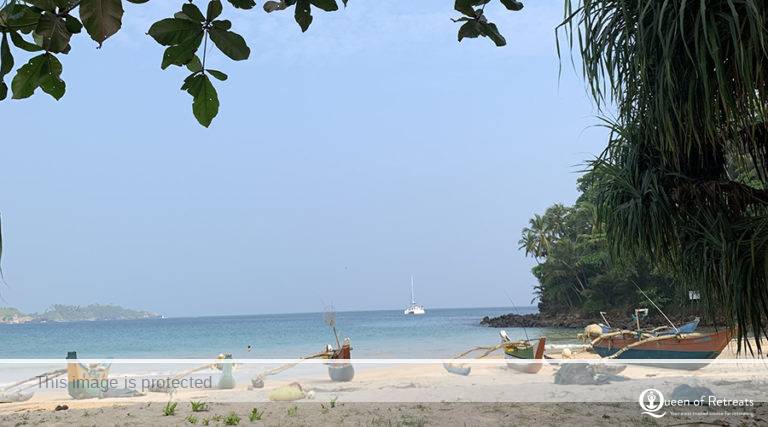 There’s a big restaurant, furnished in dark, teak wood with strings of Edison bulbs looped from the ceiling. The space is populated throughout the day by retreat goers sipping watermelon juice and people uploading their latest videos to Instagram (there’s no wifi in the rooms, only the public areas – you can ignore them all very easily if social media just is not your thing).

My home for the week was a bamboo hut. They’re billed as luxury and although you sleep in a four poster, it’s worth noting they’re partially open to the elements which means that nature can sometimes come and join you in your bedroom. It’s lovely to be lulled to sleep to the whoosh of the Indian Ocean and the rhythmic sounds of tropical wildlife, but I did wake up one day to find a flip flop had been munched by a chipmunk. Which was quite annoying, but also funny.

The wildlife was next level. Walking out of my hut to be greeted by a male peacock in full show-off mode one morning was quite a moment. Fireflies would light up at night, dancing around pathways, while a giant moon hung over the inky sea and flying foxes flew high overhead. It’s not taking it too far to say that this country has something magical, and it was working its magic on me.

I settled easily into my place in this almost unreal backdrop and began to experience one of the most heart-opening yoga retreat experiences I’ve ever had. Probably because of the focus on deeply experiencing the asana, you effectively ‘slough off’ (one of Jim’s favourite phrases) the rigidity of modern life and give yourself the chance to be renewed, inside and out.

‘I settled easily into my place in this almost unreal backdrop and experienced one of the most heart-opening yoga retreat experiences I’ve ever had. Probably because of the focus on deeply experiencing the asana, you effectively ‘slough off’ (one of Jim’s favourite phrases) the rigidity of modern life and give yourself the chance to be renewed, inside and out’

Jim and Khadine riffed off the mood of the group, expertly, guiding us through partner yoga, mantra, pranayama and a lot of triangle poses. For the first time since I can remember, classes were not structured around a sun salutation sequence. Jim and Khadine teach their own variety of yoga called Vajasati, which focuses on alignment, stretching and mindfully exploring how far you can take yourself in the practise. I’ve always been averse to the exactitude of Iyengar, but this yoga was on the contrary, very liberating.

And people love it. Jim in particular has attracted a dedicated group of practitioners who enjoy his easygoing style of teaching and who presumably, like me, feel the positive effects of his classes straight away. Make no mistake – we may not have been flinging our legs around Vinyasa Flow style, but you will be challenged. You will stretch, tone and push yourself – but it felt that this was happening in a safe, supported way. We were encouraged to really feel what was going on in our interior experience, honestly investigate the sensations and really and truly slow down and breathe.

My classmates were at many different stages of their yoga journey. Several had completed yoga teacher training, others were beginners who’d had just one workshop with Jim and Khadine – but perhaps because they were there for the teachers or because it was the vibe of the retreat there was an open-heartedness, and a willingness to support and share which was very special and in my experience, exceptional. 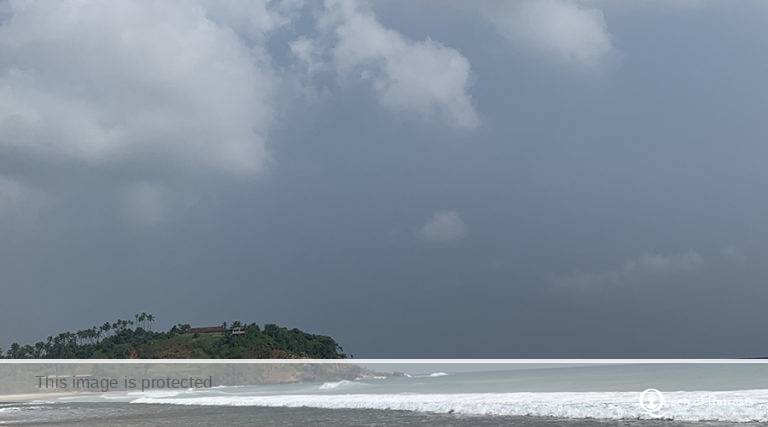 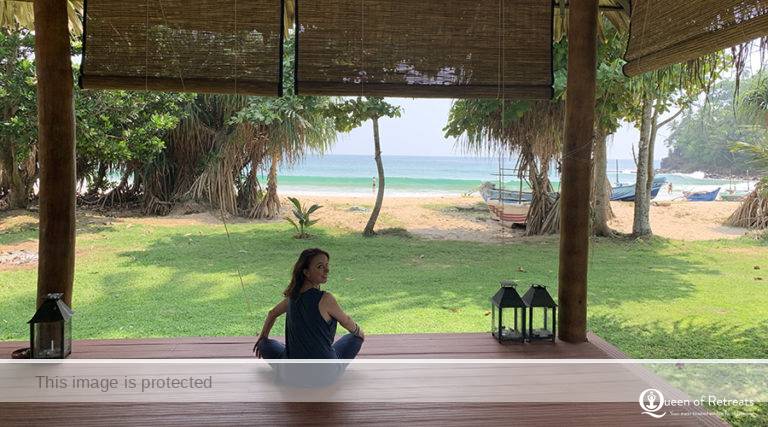 I would put this down in part to Jo Thornhill, founder of Yoga Explorers. She’s a former TV producer who turned her side hustle retreat business into her full-time gig. A dedicated yogi herself, she’d been going on retreats for years but found that many of them were austere and focused on deprivation. Her philosophy is that if you’re giving up a week of your holiday time, you want to sleep somewhere gorgeous, enjoy exceptional yoga teaching and have an uplifting holiday experience while you’re at it.
The teachers she works with are diverse in style but she’s laser-focused on quality teaching that comes with a lack of ego. The result is a nurturing yoga holiday that encourages personal evolution both in your practise and spiritually.

Out of the yoga shala and away from our lively meals, we were surrounded by other guests at Talalla who were sometimes there for the beach, and often for the surf school which Talalla also runs. The crowd is varied but tends towards the hipster with a number of guests I suspect probably of the influencer variety.

At the end of the week, the goodbyes were emotional and the hugging seemed to last for hours, which is surely the best possible sign of a good retreat. A bunch of us set off on the next leg of our Sri Lanka adventure. And with the surf season hotting up on the South Coast, we headed to Mirissa, to eek out the Yoga Explorers vibe just a little longer.