Learning which chances to take with Tuscan Getaway 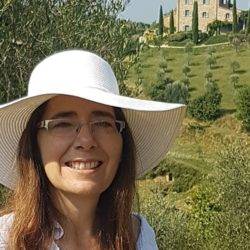 Nicki Grihault reviews an exceptional Mind & Body Week at a splendid villa in Tuscany led by charismatic retreat leader and TV host Debbie Travis, where she finds the respite and inspiration she needs to take her next step.

Following a stressful year, which included a near break-up and prolonged periods of overwork, my Tuscan Getaway came at a good time, when I longed for respite and some space to think. Located at the spectacular Villa Reniella, on the outskirts of the sleepy medieval village of Montefollonico in the hills south of Siena, the seven day Mind & Body Week I had booked on is just one of the nurturing and luxurious escapes on offer here in the company of other women.

After an aperitivo on the Lemon Terrace, the retreat began with a forum in the barn hosted by Lancashire-bred Debbie Travis, the creator of Tuscan Getaway, which she runs with her best friend of 30 years, nutritionist Jacky Brown. Put together a bit like a dinner party, these retreats are designed to inspire women to envision and follow their own dreams and are a long-held dream for many. Debbie escorts every woman to their beautiful room, and some burst into tears when they see it. 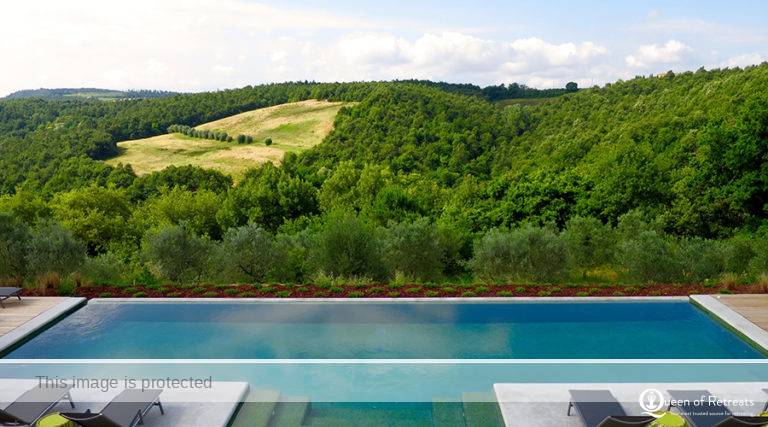 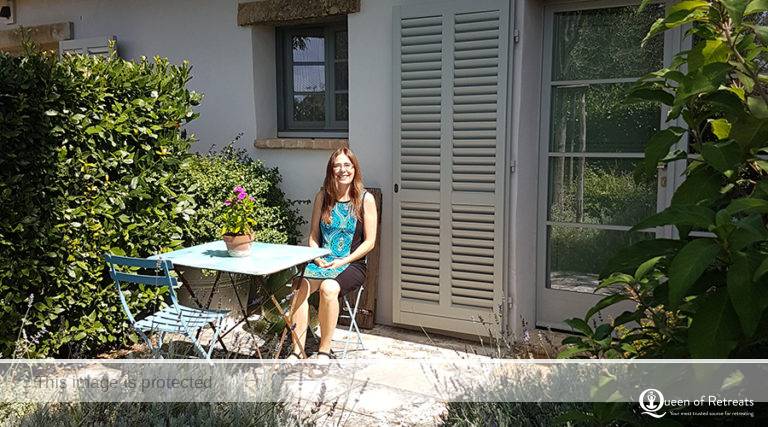 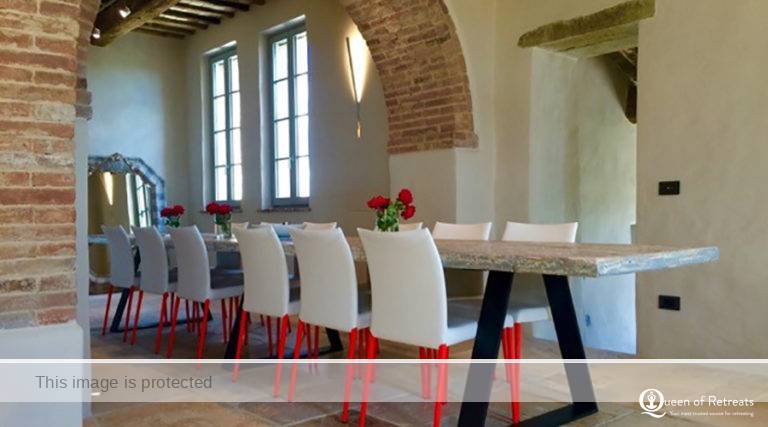 A sharing circle revealed our group’s reasons for coming. We were a mix of ages, 30’s, 40’s, 50’s & 60’s, many of whom were high-flyers. Some, like me, had come alone, others with a relative or friend. Most were from Canada (where Debbie Travis is a household name as a television producer and host), but guests typically also hail from America, South Africa, Australia, the UK, and increasingly, from Europe. Some practiced yoga, mindfulness and healthy nutrition at home but many were wellness beginners. Although the reasons for coming were myriad, we were united by being at a turning point in our lives, and the question, ‘what’s next?’, hung in the air.

Whilst each day was different, they followed a similar rhythm. Wellbeing activities were interspersed with an excursion, talk or demonstration, and delicious Tuscan food and wine, either in the villa or in a local gourmet restaurant. The day began at 6.45am, with a hour’s hike led by Jacky’s affable husband Steve. Having planned on getting extra sleep, I tried it once, and was hooked. The valley looked like a Turner watercolour with the morning mist, we spotted deer as we conquered the Tuscan hills before breakfast, and I came to look forward to the camaraderie of our small group.

‘It’s stunning beautiful and meticulously organised, but what really sets Tuscan Getaway apart is getting to hang out with Debbie Travis, an expert in reinvention whose forums nudged us towards our next chapters, encouraged by the camaraderie of the group’

On the wooden deck of the yoga shala with views over the valley, we breathed the scent of rosemary and lavender released by the morning sun, in a mindfulness meditation led by the experienced American practitioner Pam Powers that was definitely worth getting out of bed for. Telling us how mindfulness had helped her own struggles with anxiety some thirty years ago, she explained mindfulness in a way we could easily understand, and we hung on to her softly-spoken words. ‘Be more like a lion, not a dog’, she smiled, as we struggled to rein in our monkey minds, even for half an hour. In small groups, she encouraged us to dig deep with questions like ‘How do I add suffering to my pain?’. My answer came immediately, ‘By not embracing necessary changes’, which gave me pause for thought.

In a unique and powerful yin-yang yoga session with British chiropractor Rupert Elverson, we breathed into the tension caused by imbalances in our bodies, and I became aware of how much easier yang postures felt than letting go in the yin ones. In encouraging us to take small steps towards poses, I went beyond my mental limits, and into a headstand.

Villa Reniella sits in one of the most scenic landscapes in Europe, dotted with medieval hilltop towns and villages, castles, convents and monasteries, and most days included a trip out to explore it. My favourite was the 30-kilometre e-bike ride, along ancient roads created by the Romans, past olive and cypress groves, isolated convents and monasteries, and UNESCO World Heritage listed denuded hills created by seashells. Debbie reminded us to take time to connect with the spiritual nature of the landscape, which had reduced some women to tears. I found my heaven at lunchtime, sitting on a terrace under pine trees, savouring vegetables wrapped in vine leaves with pecorino sauce, Tuscan bean soup, and a cheese platter with bread, all produced on an organic farm run by a swiss couple. 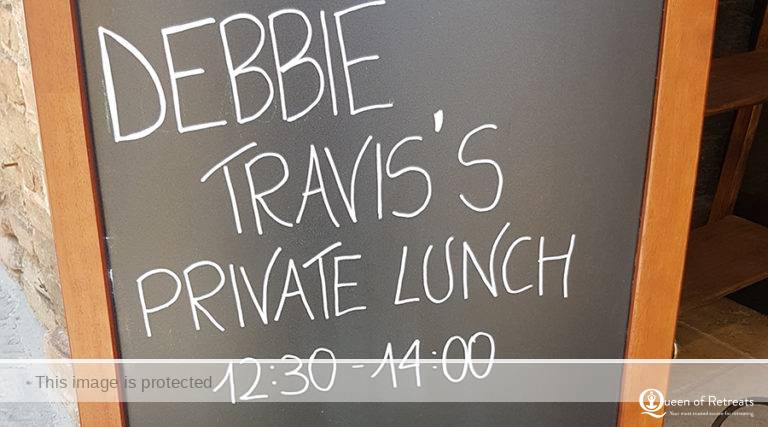 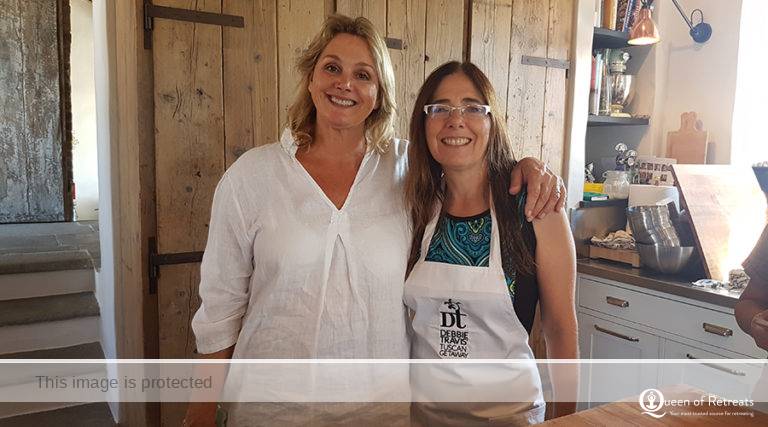 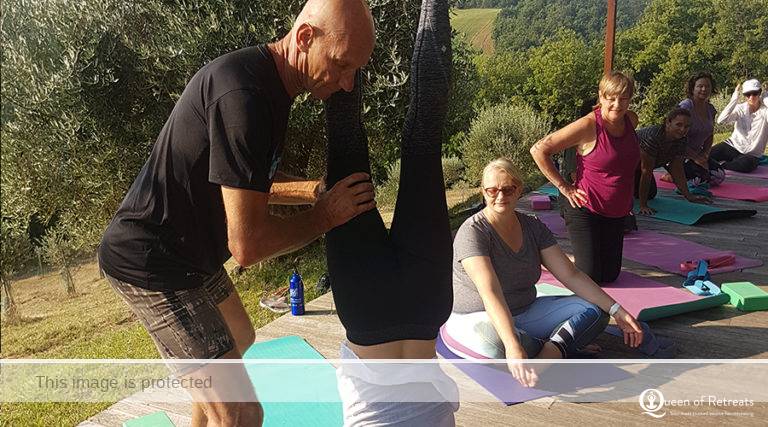 One to ones during the retreat included a massage and a nutritional consultation. In a cabin at the bottom of the garden, the bird-like Lalla gave a surprisingly strong rhythmic ayurvedic massage with healing oils from India which so becalmed my busy mind, that unusually, I fell asleep. Armed with my pre-trip health questionnaire, Jacky gave me advice on how to bring my energy back through nutrition, in order to tackle life’s big questions – from magnesium baths to aid sleep to hormone-balancing foods and kegel exercises to strengthen the pelvic floor. Later, demonstrations of easy nutrition hacks had me growing sprouts and making kefir at home.

The retreat was stunning beautiful and meticulously organised, but what really sets Tuscan Getaway apart is getting to hang out with Debbie Travis. Having made the transition from a career as a model to a television producer and host of home design programmes in North America (endorsed by Oprah Winfrey) to now running retreats in her luxury boutique villa in Tuscany, Debbie is somewhat of an expert in reinvention. Her forums nudged us towards our next chapters, encouraged by the group. By day three, we were supporting each other, sharing stories and insights and exploring our dreams on the morning walk, over a poolside prosecco and during long Tuscan dinners.

Frances Mayes’ book Under the Tuscan Sun, about restoring a villa in Tuscany, was what inspired Debbie to create Villa Reniella, and watching the film alfresco with a punnet of truffle popcorn under the stars, I got some true direction following my troubled year. ‘Life offers you a thousand chances…,’ said Diane Lane, playing Frances Mayes. ‘All you have to do is take one’. Debbie had done that, and look what she created. I thought of running my ideas past her, but I thought I knew what she’d say: ‘Just do it!’. I returned from the week feeling stronger, healthier and much clearer than before.