Finding the magic we need with The Soul Maven, Somerset

Sitting on the train to Castle Cary in Somerset on a rainy, blustery monday morning in October, I’m thinking about just what has drawn me to the Soul Maven retreat in Glastonbury rather than one in Bali, Morocco or Spain, where I’d be sure of clement weather and the pull of foreign places to discover. It’s led me to think about the different sorts of ‘outside’ there are and how each can affect and nourish the soul – whether that’s beaches, exotic jungles, desert or mountains. The outside I’ve been longing for is, for once, earthy and damp and peculiarly British. The forecast for the week is rainy with patches of sun, but we’re in the full flush of Autumn and the trees are wearing their colourful autumnal finery, flashing deep reds, yellows and bright scarlet.

As a Londoner with a busy work life and a family to run – I’m a mother with two teenage boys and a grown up stepdaughter – it’s sometimes difficult to connect with the outside and notice the changing seasons. While retreats abroad are enticing, often the benefits are mitigated by the long travelling time at either end. It’s more relaxing to trot to Paddington and board a train. Besides I know nothing of Glastonbury, beyond the annual Glastonbury Festival and passing by Stonehenge on my way to other places. So while I’m happy with my life and not seeking a big shift, I’m also exhausted and looking forward to a ‘local’ place where I can unwind, reset and enjoy the outdoors. 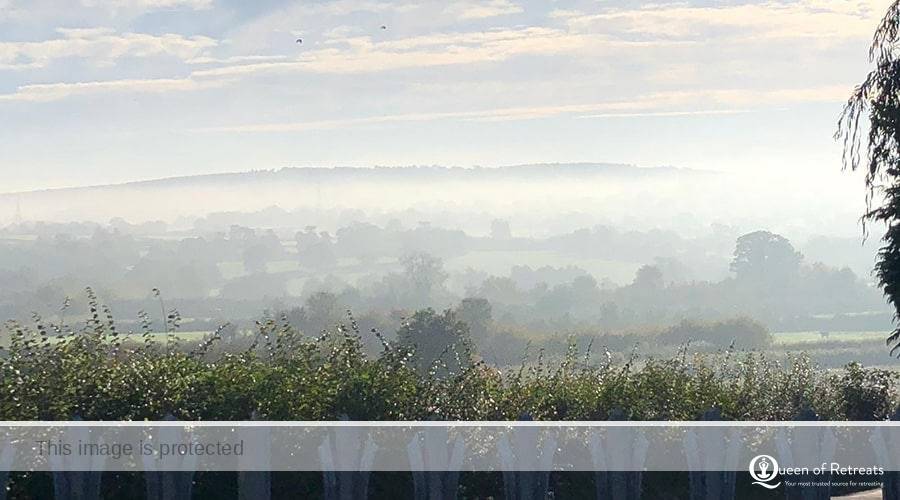 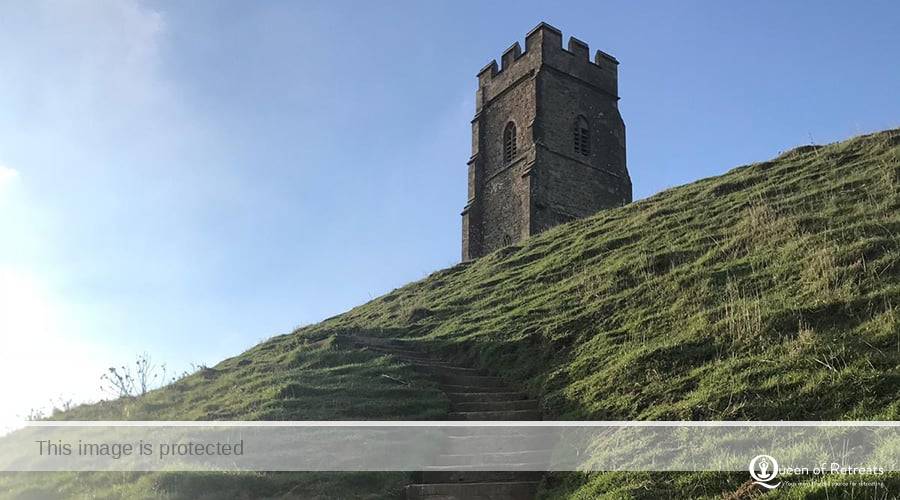 This annual retreat is being run by Maeve Northcross, a Texan midwife with six children who visited Glastonbury two years ago on a retreat and was profoundly changed by her experience here; enough to want to move to England and set up a similar retreat experience of her own. This is her first. From the blurb it’s hard to pin down exactly what it’s about – part spiritual healing, part cultural/historical tour of the ancient sights of Glastonbury. I’m intrigued as to how this 7 day spiritual smorgasbord is all going to work.

Our home for the week is Middlewick Farm, a pretty property which has been turned into holiday cottages about 10 minutes outside Glastonbury. Nestled in a 16 acre blend of gardens, horse paddocks and orchard, it sits near the ancient oak trees Gog and Maggog (thought to be the entrance to the ancient Isle of Avalon), backs onto Glastonbury Tor and has spectacular views across the Somerset levels. The accommodation is roomy and comfortable – I have an apartment on two levels with a kitchen and cosy living room downstairs and a large, country-style bedroom and bathroom upstairs.

My first evening is spent getting to know Maeve and the other guests and planning the week ahead. The vibe is older, friendly and American, with fellow guests ranging in age from around 30 to 78, including a Guatemalan American who is now living in Paris, an American midwife living in Belize, a business woman from California and one local graphic designer in her early 30s. Most aren’t particularly spiritually savvy, but all share a noble desire to leave behind a life that isn’t working properly and make profound changes that will help them get to the next stage.

‘Maeve’s apple pie, Texan enthusiasm for Glastonbury and evangelistic zeal for spiritual healing is infectious and I end up enjoying seeing Glastonbury and the British countryside through foreign eyes.’

Being a person who needs to move to think, I’m quite disappointed to hear that not much hiking is scheduled in and that there seems to be rather a lot of emphasis on shopping. I also find that the food on the first night, while comforting and well flavoured, is much heavier than I would have hoped (a beef stew with potatoes followed by a sponge desert). But then the emphasis of this retreat is more about nurturing through being kind to yourself rather than punishing regimes, which is not necessarily a bad thing; it’s just not my thing.

That said, the powerful energy of Glastonbury soon works its magic. Glastonbury is purported to be the ‘heart chakra’ of the planet and lies on network of laylines (a sort of energetic highway which links ancient holy sites), so just being here is meant to energetically bring about change. With that in mind, the first day is spent getting to know the area, which is a magnet for spiritual journeymen. The highstreet is a Diagon Alley of magic and crystal shops with names like ‘The Cat and Cauldron’ and ‘Star Child’. Everyone seems to be a witch, wizard or goddess – I half expect Harry Potter to pop up. We spend the morning meditating at the Chalice Well, an ancient sacred spring that runs red with iron and is said to have magical healing powers. The afternoon is taken up on a gentle three hour walking tour with guide and ‘wizard’ Jeremy White (Shaman), who delivers a fascinating overview of the ancient myth and magic of Glastonbury and the valley of Avalon, as well as leading us on a ‘vision quest’ to help understand our future path.

Aside from visits to ancient sites, there are daily workshops designed to shift trauma, cleanse and bring spiritual growth, including classes in Qigong, sound healing and Breathwork. An unexpected highlight for me is the Transformational Breath class on day three. I’m sceptical about how breathing can bring about transformation, but according to the practitioner Julie Ann Horrax, around 50 percent of people are only breathing to 10-20 percent of capacity, as we hold and control our emotions through breath. And there seems to be some truth in this; after 20 minutes of lying on a mat and deep breathing, I’m sobbing and do feel a release from pent up emotions. 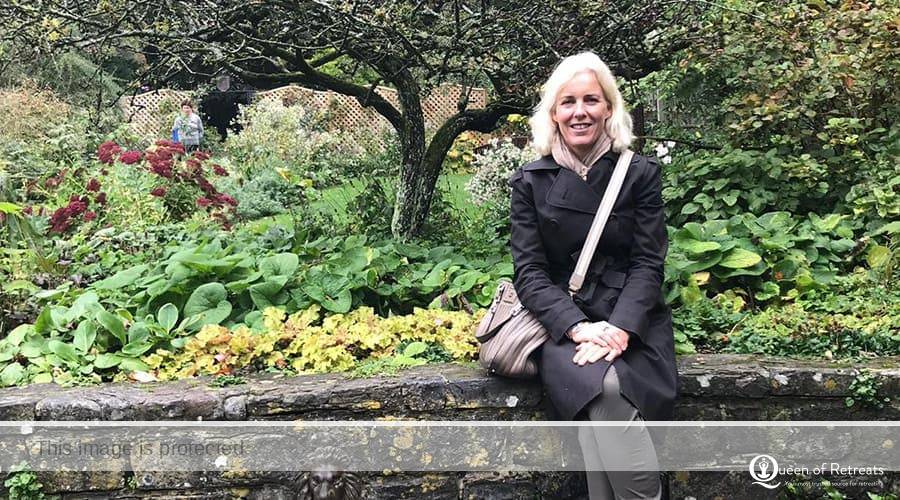 As there’s not much walking on the agenda, I take the opportunity to walk back to the farm from Glastonbury one day via Glastonbury Tor. It’s a glorious autumnal day and I deeply enjoy the hour and a half solo jaunt, reflecting on life and the strong earthy energy of this part of the world.

In the end the mix of unorthodox healing workshops coupled with cultural days out does work as a great introduction to spirituality. Maeve’s apple pie, Texan enthusiasm for Glastonbury (she pronounces it “Glastonberry”), and evangelistic zeal for spiritual healing is infectious and I end up enjoying seeing Glastonbury and the British countryside through foreign eyes. Maeve is also a good organiser, and while it’s obvious that she’s feeling her way along on this, her first retreat, she’s quick to read the crowd, make changes and accommodate everyone’s needs. At the end of the 7 days, others on the trip tell me they have felt profound shifts and while I don’t feel a huge transformation, I come away feeling refreshed, energised and ready to get back to the hum-drum with renewed zeal.