Writing and dreaming again on a Skyros holiday

Niki Natarajan reviews a Skyros holistic holiday at Atsitsa Bay on Skyros Island in Greece, and through creative writing and yoga finds dreams long buried under the overwhelm of her life.

The imperceptible hums of the Hammersmith and City line had been replaced by a cacophony of cicadas and chatty goats. My new wake-up call was the strangled sounds of a half-hearted cockerel. After almost 24 hours door to door, I had exchanged my bijou flat in London for a mosquito net-draped bed in a tiny hexagonal hut surrounded by rosemary bushes and bright pink bougainvillea. A five-hour two-ferry adventure and I had made it to Atsitsa Bay, one of two Skyros Holidays’s two island locations on Skyros Island where I was to spend a week.

As the coach pulled up to the stone house facing Atsitsa Bay, lots of fresh-faced enthusiastic blue top clad ‘work scholars’ raced out to greet us. They reminded me of the animateurs at Club Med. As a first-time ‘participant’, I was now glad the 30-minute Aegean flight from Athens had been full. It gave me permission to be a passenger. On the winding roads of the overland route to the island of Skyros, I began the process of digging for forgotten dreams buried deep under the overwhelm of my life. 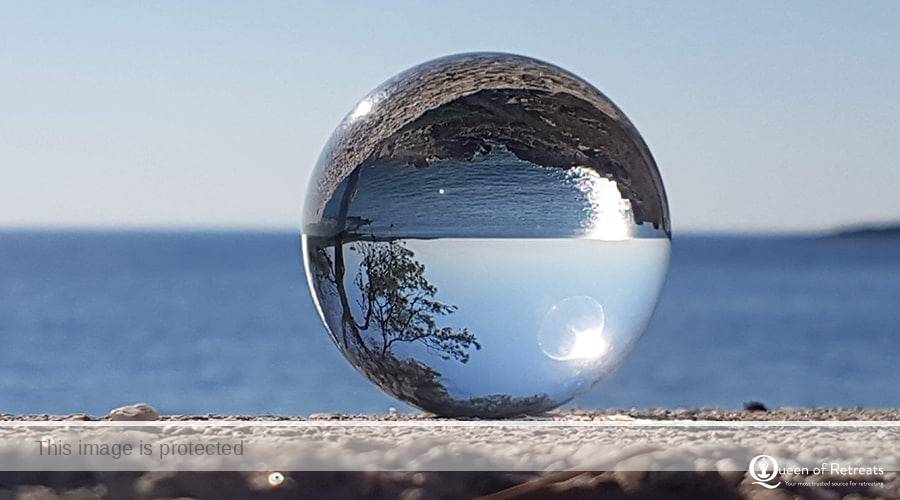 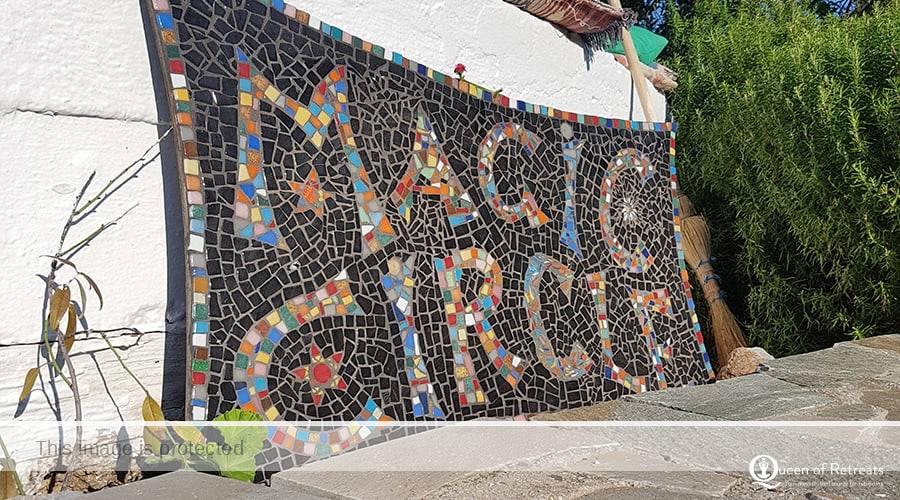 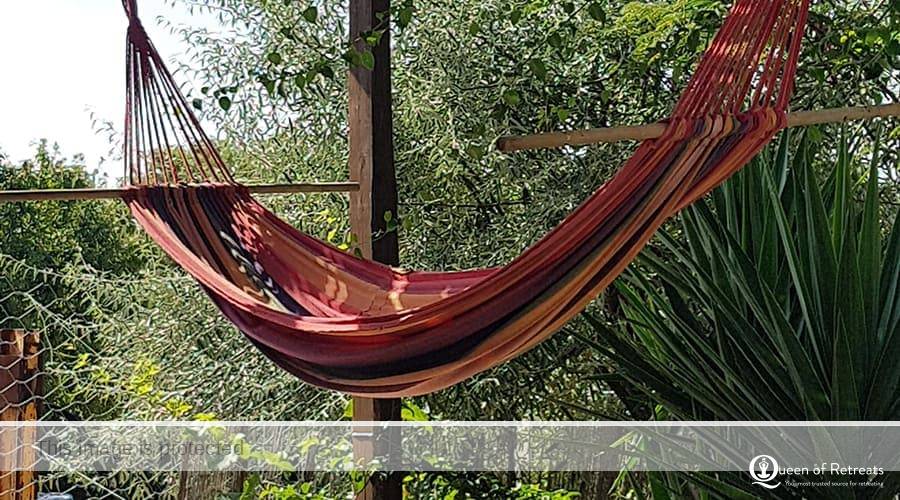 Four years ago, after more than 20 years as a full time financial journalist, I found myself face to face with one of my greatest fears: freelancing. The reality of living and working alone out of my studio flat, surviving from gig to gig as a financial ghost writer, my own writer’s voice ebbing further away with every monthly invoice.

For this reason, I took the creative writing course, Your Life in Words with Stephen Clarke, author of 1000 Years of Annoying the French. My mornings became a light-hearted, thoroughly effective and profoundly entertaining tour of the creative writing process. After four days, I felt a bit like myself again. All of our writers’ group blossomed.

It is perhaps no coincidence that I picked Maya Angelou’s “There is no greater agony than bearing an untold story inside you,” as my quote of the day for demos, Skyros Holidays’ daily community announcements platform. It resonated with quite a few of my fellow holiday makers; story telling is a known healing modality.

It also turns out that learning any skill creates a surge in self-esteem. According to Mihaly Csikszentmihalyi, psychologist and author of Flow: The Psychology of Optimal Experience, “It is not the skills we actually have that determine how we feel but the ones we think we have”. Perhaps next time I will spend a week at The Writer’s Lab in town.

‘My mornings became a light-hearted, thoroughly effective and profoundly entertaining tour of the creative writing process. After four days, I felt a bit like myself again’

For my afternoon activity, I chose yoga. In retrospect, as a seasoned yogini, it was hardly a boundary pushing choice. But life took care of that. I was thrown an extra-curricular lesson in the form of a crippling attack of sciatica. Everyone at the centre checked in, offering whatever they could whenever they saw me. Marina White Raven’s Yoga Nidra sessions provided a little respite. Accepting help was new to me.

As a bit of a personal development junkie, a Skyros Holiday should have been right up my ‘spiritual’ street, and one that I should have done before. But as I did not like the idea of being tied to one group I did not know for a week, I had taken the ‘quit job go travelling’ path to solving problems instead: India in my 20s; Latin America in my 30s. In my 40s, with a mortgage, these ‘sabbaticals of the soul’ were a luxury I could no longer afford.

While many first timers do come to Skyros to recover from something, the camaraderie and supportive community is the reason there is a 70% return rate. The 45-minute daily oekos gatherings—where people take a couple of minutes to share what’s on their mind in small groups—are one such supportive structure.

Even though I am pretty chatty and open, the notion of a group share filled me with dread. I like to try most things once, so in the sea view setting under the pine tree of Marianna’s Sunset Café, I gave it a go. Being heard without comment, advice or judgement was extraordinarily powerful.

Married, single or divorced, the participants, which were biased towards females at Atsitsa Bay, came from all walks of life (and continents), and included a newly qualified Cambridge University PhD, an author, a nursery teacher as well as a Jungian analyst, a paediatrician and marketers from the National Trust and a London law firm.

Like-minded is a term frequently used to describe the people that come to Skyros. I disagree. I loved the fact that my new-found friends did not have my kind of mind. It was their variety of ages, ranging from mid 20s to 60 plus, and mind-opening variety of life experiences that made the conversations lively and interactions interesting. As the week progressed, it dawned on me that Skyros is more of a Club Med for self-improvement than an ashram of lost souls – even the holidays are run as a community. 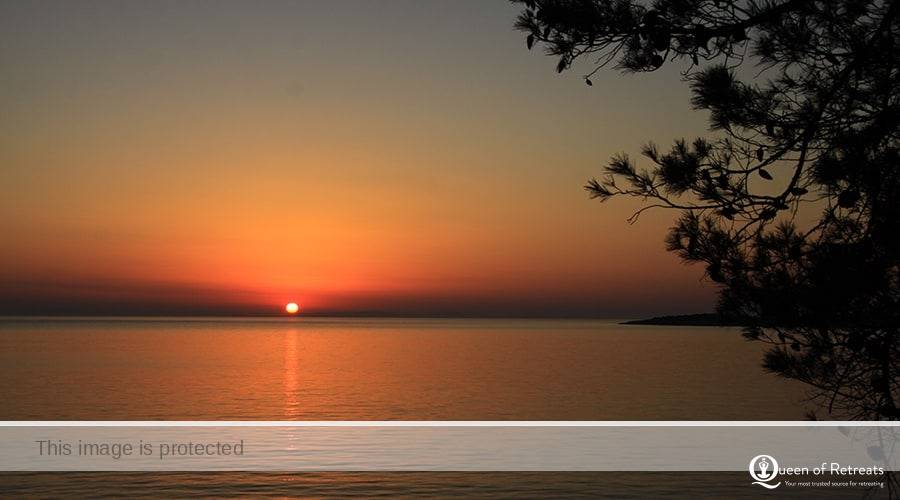 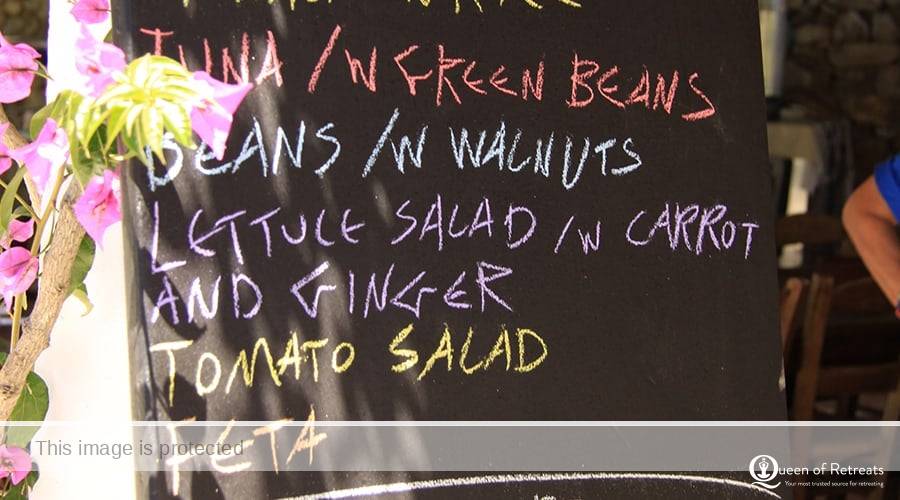 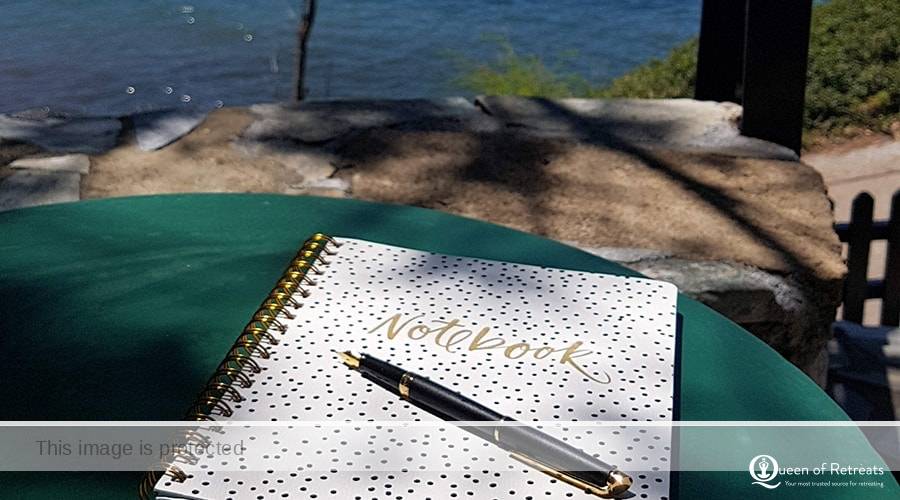 One of the highlights on this wifi-free holiday were the chat-filled meals on the long wooden refectory tables under the pergola: very patchy 4G meant actual conversation. I enjoyed tomatoes that tasted of tomato and devoured all of Chef Takis’ other Mediterranean dishes, practically inhaling the succulent ice-cold watermelon at lunchtime. So much for mindful eating. Maybe because I was ‘in the flow’ of my activities or perhaps because there are so many things to do at Atsitsa, the week sped by. I spent no free time in my hut, opting instead for a coffee and writing time at Marianna’s café, or swim and sunbathing at Dead Goats beach, the closest to the house. I left with a tinge of regret that I had not tried out other beaches, explored the town properly, or tried to learn the ukulele so I could join in at the end of week cabaret.

Atsitsa Bay is the sort of holiday you come home feeling it’s never too late to start anything new. In my case: a new chapter. “Writing is a muscle that needs to be flexed regularly,” said Stephen Clarke on our first day. And he should know; he’s written more than 10 books. Now I’m home, it is time to invest time to write for me. And in case I forget, there should be a letter to myself in the post any day now.