Charlotte North reviews this magical wellbeing retreat near Marbella in Spain for a rejuvenation Pilates programme and finds the calm, space and attention she needs to regroup

It’s a fine early spring afternoon, surprisingly warm and pregnant with the promise of summer. I am lying on my back, about to start my first Pilates session. To a Pilates ingenue like me, the Cadillac Reformer resembles some kind of medieval torture device, but it turns out to be a surprisingly comfortable and easy-to-use piece of resistance equipment.

I am slightly nervous but my instructor Javier puts me at ease, carefully explaining the movements and gauging the right level of difficulty for me. Crucially, he chooses a fun playlist of party music to motivate me. Before long, my legs are in the air and I am doing a move called ‘The Frog’ to Culture Club’s ‘Karma Chameleon’.

I visited at Shanti Som for a 4 night Pilates retreat when I was at a low ebb, and am so glad I took the time out. As a freelance writer and radio producer it is sometimes hard to say no to work which means it can be easy to over commit and take too much on. I felt anxious, tired and lacking in clarity. 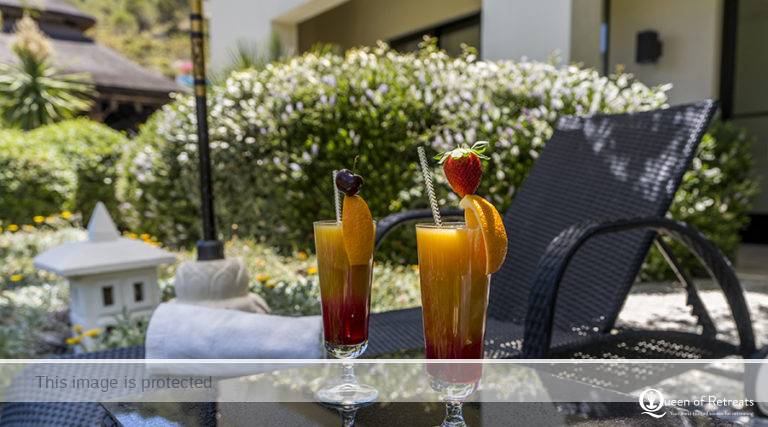 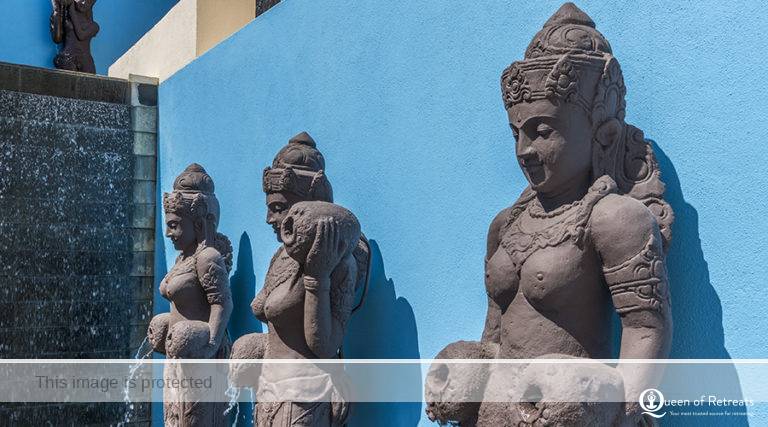 Turning off the main road after a straightforward 45-minute journey from the airport, my driver took me down a tiny lane winding its way through a wooded valley, at the end of which, peeking through the sun-dappled trees, was a large lazy-looking buddha lying on its side welcoming me to Shanti Som.

As soon as I arrived I felt at ease. The South East Asia-inspired décor was tasteful, the natural surroundings were calming and the staff were extremely welcoming. My room was comfortable with an ensuite bathroom and a balcony that looked out over the hills. I immediately headed to the swimming pool loungers where I crashed out in the sun and felt life’s pressures begin to subside.

My fellow guests were a diverse and friendly group of all ages and backgrounds, and focusing on a wide-variety of different aspects of their wellbeing. Some people were recovering from burnout or overcoming grief; some were juice cleansing, and one 77-year-old guest was learning yoga for the first time to help his mobility. There were couples on a romantic break as well as people on their own looking for some time away and to focus on self-care. Sitting down for breakfast or a long lunch with them I was surprised by how quickly we moved beyond polite conversation and talked openly about why each of us had chosen to come on a retreat and some of the everyday challenges we faced.

‘Christine Vespermann has worked hard to create a real sense of personal connection and family here, and it’s clear this relaxed sense of family has inspired guests to return again and again’

Christine Vespermann, the manager of Shanti Som, has worked hard to create a real sense of personal connection and family here. Little touches, like their waiter Juan remembering my name and meal preferences, were thoughtful. The dining room had a shared table which solo people could join if they wished to. This made it very easy to have company when I wanted it, but I felt no pressure to socialise if I needed some time alone. Because the number of rooms is also relatively small it meant that it never felt too crowded.

It was clear that this sense of family has inspired guests to return again and again. Two sisters I met said that Shanti Som had been a sanctuary for them after suffering a bereavement and they had returned four times in the last two years.

My Pilates retreat was for three days and four nights. Included in that was two morning yoga sessions, three Pilates classes, a body scrub and a guided hike in the national park that is adjacent to the retreat. On top of that, I indulged in some treatments at extra cost: a full body massage and a reiki session.

Each Pilates session was different and challenging in its own way – the first focused on the Reformer (the moving platform.) We focused on strengthening my core and abductor muscles. My second session was on the Cadillac (the trapeze hand bar above the Reformer) and I learned a set of poses which used gravity as resistance to improve my balance and flexibility.

I was especially excited about my last session: an introduction to aerial Pilates. Javier rigged up some red silks and a swing from the rafters of the outdoor yoga pavilion. Using the swing for resistance I lifted my legs off the ground and began with some plank-based movements. Having mastered those, I was able to learn some more complicated positions where I sat on the swing, turned myself upside down and by wrapping my legs in the silks, was able to let go with my hands and suspend myself in the air. It was exhilarating. Around the programmed activities there were additional hikes, yoga sessions and meditations on offer though I tended to want to spend time in and around their heated outdoor pool.

By the evening my core and legs would ache in a satisfying way and I would be ready for sustenance. The Asian-fusion menu was fresh and generously portioned. Dishes included a tasty Tom Kha Thai soup, Udon noodles and freshly made curries. I usually lost the nightly struggle to say no to a pudding and a glass of wine and then headed to bed to drift gently off to sleep.

On my last morning I went for a five-mile circular hike in the hills surrounding the retreat. It was a bright, breezy morning. After a moderately challenging climb, we looked across the lush green valley, taking in the purple wild flowers peppering the ground and the distant sea twinkling in the sun. I realised how much better I felt compared to four days earlier and that a mental fog had lifted.

I came to Shanti Som hoping to recharge, improve my Pilates technique and have a digital detox. But as I left I realised I had taken away a lot more: a greater sense of connection, some new friends and a lighter spirit.