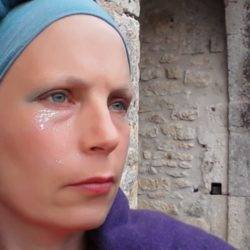 Mother of two, artist and teacher and most recently a cancer patient, Tara Sampy reviewed a Restore and Revitalise retreat at Puyssentut in Southern France and found it a joyful, transformative experience.

I had been so looking forward to the change of scene, and a break from being mummy, wife and cancer patient when I chose to book a Restore and Revitalise retreat at Puyssentut in Southern France. A week in beautiful gardens, a pool, yoga, healing therapies and gorgeous food was the chance for some ‘Me time’ that everyone had been encouraging me to take since my breast cancer diagnosis nine months before.

My treatment had been a gruelling hike, and although chemo had just finished there was new treatment around the corner. My body had suffered such a bashing and I felt lonely after it all, unable to socialise and connect with anyone. So going on this retreat was a big step. I was unsure who that ‘Me’ was any more, and I felt nervous about traveling alone and spending a week with strangers. 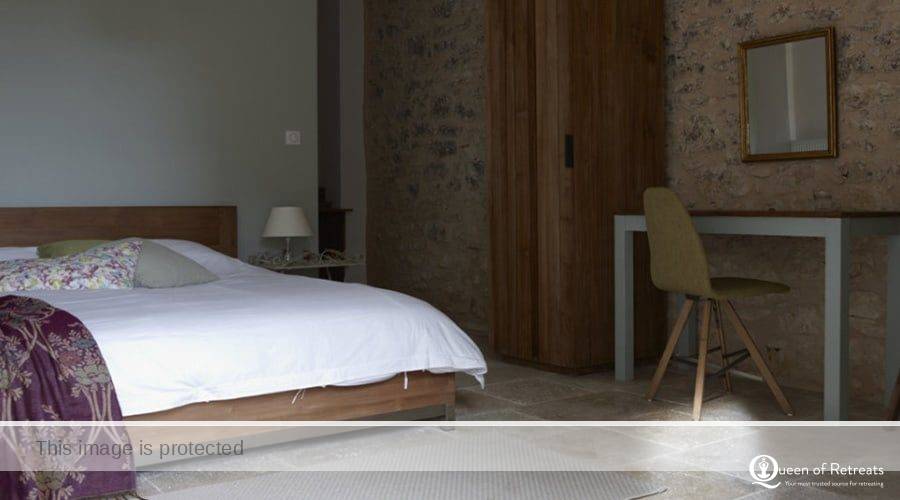 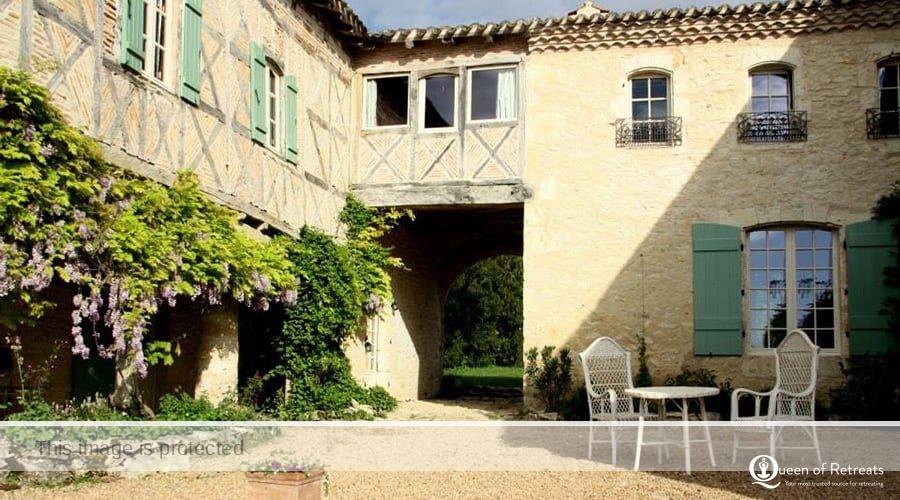 Greeted with smiles by our host, Angela, and two other guests at Toulouse Airport, the car was filled with a collection of voices from the USA, the Netherlands and the UK. We drove through sunny, French countryside and pretty, sleepy villages, arriving at the chateau, where the other host DK (short for a difficult to pronounce Dutch name), alongside Bobby the dog, awaited us with a warm hug.

Puyssentut looked exactly as the website promised: rural, very French, tranquil, spacious and welcoming. My room opened onto the vegetable garden and the fields beyond. Decorated in calm, but extravagant, minimalist luxury, it had a huge bed, gorgeous deep mattress and luxurious white cotton bedlinen. There were intriguing details: the ensuite bathroom was behind a dividing wall, and its fabulous sink was hewn from a chunk of stone, which felt grand and earthy. I loved the range of textures underfoot: stone, ceramic tile, cow hide and glass pebbles. There were interesting artworks too, from DK’s own collection. Such considered attention to detail, both visual and tactile, is testament to the owners’ passion for the retreat. It immediately gave a feeling of comfort and relaxation.

The welcome on Sunday gave an insight into the experiences I was to have over the course of the week. Everyone introduced themselves, and my ease and trust grew as I heard the tales of others. We were eight guests, all women in our 40s to 60s , and a team of seven who would be cooking, hosting, offering therapeutic treatments and teaching. It was reassuring that everything on offer here was a choice, and not compulsory. This was a week for wellness; comfort was paramount. I took a deep breath and started to truly relax.

‘My fear of the uncertainty of the future had shrunk from the mountain it was to a manageable size, and I flew back with a feeling of serenity, knowing that who I am and what I have to offer is enough.’

The structure of the week was carefully thought out, with group meditation and yoga in the morning and individual complementary therapy treatments in the afternoon, or time to relax in the salt water pool. Clearly food was going be a major part of the week, and Simone – the amazing, beaming chef – would accommodate any dietary intolerances. Angela was swift to say that if we found ourselves yearning or craving something, this wasn’t a scary detox retreat – we just had to ask and they would make it happen. Ahh – more softening!

It was so great to be in an environment where I wasn’t ‘the one with cancer’, since most of us were! It was heartening, educational, and strengthening to talk frankly and hear others talk so freely about their experiences. But it didn’t dominate our conversation.

I was slowly getting into the rhythm of the days and feeling more comfortable with time spent on me. I felt so looked after, nurtured and nourished. But a niggling worry was growing about returning home – how was I going to manage the switch from being the recipient of such care to the one who was meant to be giving it?

Morning meditation was a lovely way to ground myself at the start of the day, and as the week progressed I became much more comfortable with it. No sooner had we started, it seemed the bell would chime to finish!

The daily yoga sessions with Barbara Gallani became a time of gradual reconnection with my body – physically and mentally. Having not done any yoga since diagnosis, I found the limitations of my body unsettling at times, but Barbara was always reassuring and offered variations to suit our abilities. She made it very clear that we were to ‘choose kindness’ to ourselves, not pain.

Meal times seemed to come around so quickly that I never felt hungry – possibly due to finding it hard to resist eating so much. Food was a sensory celebration: delicious new tastes and textures, beautifully presented. I loved the chickpea flour battered baby courgettes with their stuffed flowers. Two birthdays were celebrated – both with chocolate. 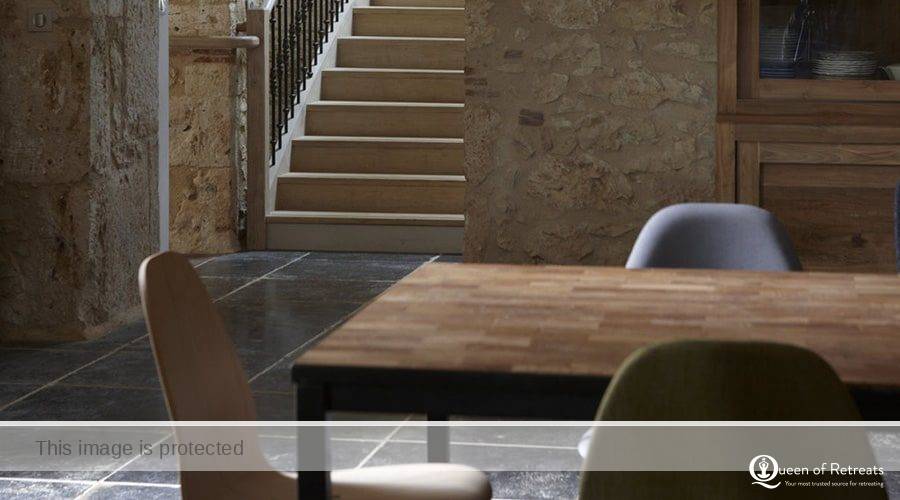 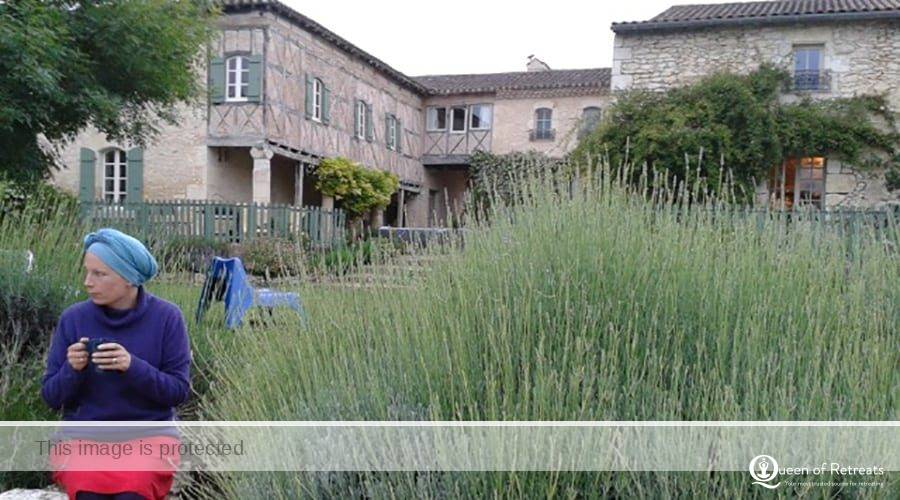 As a kind of finale and celebration, an afternoon of Biodanza was organised in the Yoga barn. I just trusted that it would be fun. It was led by the enigmatic Franka, who set us all at ease and it felt easy to groove along and feel a genuine sense of shared openness amongst us all. It turned out to be a transformative hour and a half: I realised afterwards that I felt strengthened. I could imagine being back in my home, back in my familiar life, and being ‘me’ again.

My fear of the uncertainty of the future had shrunk from the mountain it was to a manageable size, and I flew back with a feeling of serenity, knowing that who I am and what I have to offer is enough. The experiences I encountered and the people I met had restored a belief in myself that had been draining out of me over the past few years.

On return, friends and family commented on the sparkle in my eyes, and the joy in my voice. It was the first time in months that I felt acknowledged and held. I had agency again. The genuine passion of the hosts who have created a place of such generosity and compassion had made this possible in me. I am among many who have promised to return.