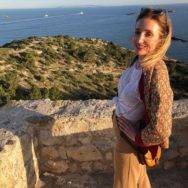 Connie Allfrey reviews a luxury wellness break with My Island Retreats on Ibiza and finds the love, laughter and intuition she needed to accept every part of herself.

At Ibiza airport, rebelling against an imminent cleanse, I bought a chocolate croissant (cold and barely worth it at 10pm) and headed into the night in the Ford I’d somehow managed to acquire for four euros for the week. I was heading for Can Almaria, now reserved for the most luxurious retreats on the island, for a wellbeing break with My Island Retreats, created by Ibiza’s super fixer Erin Knowles.

Just by the village of San Rafael, the villa is one of those vast white, stepped behemoths, with two outside pools, the main one lined with wooden sunbeds, and dotted with potted plants, olives and small satsuma trees. The style inside is airy, fresh and elegant, with terracotta tiled floors, heavy linen curtains, and those Mediterranean blue and wood touches that breathe peace.  Fires in the kitchen and living room, and a well stocked bookcase, with tomes ranging from something called Bonk to Deepak Chopra, keep it crucially cosy and contained, as let’s be honest, Ibiza doesn’t really know what to do when it rains. 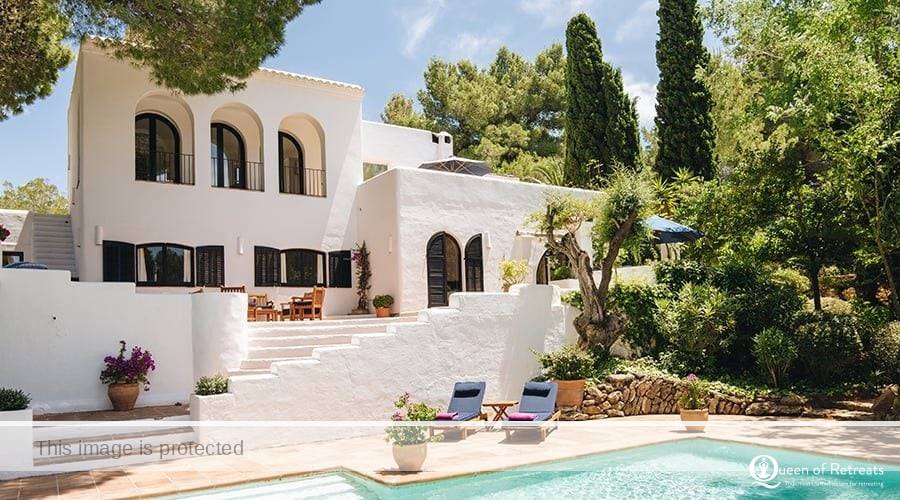 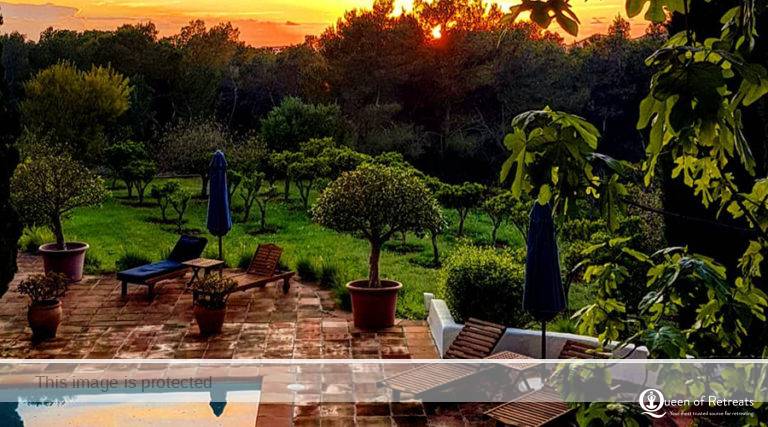 I was greeted by Erin, the kind of sun-kissed yogi you want to swap tips and hang out with rather than wrestle down from their headstand – like a warm hug, but with humour.  Ever present to meet everyone’s needs, but retaining an effortless realness that dissolves the boundaries between client and host, she makes it all very easy.

I slept well, under a vast layering of duvets as it was unusually chilled for late April. I was relieved to discover my double room had one of the two baths, and also a door leading directly outside, to a fountain and a sunbed, so I could slip out for a morning run before breakfast, along one of the tracks, through the woods and out into open olive groves, listening to ‘Are you alone? Are you alive?’ Are you the sun, are you the sky?’ Yes I am!

The retreat officially began at lunch the next day with the softest aubergine and pesto, a slither of mozzarella, and a quinoa, spinach and beetroot salad from Ali, our Scottish alchemist for the week.  The chef is a fundamental ingredient to any retreat here and Ali was divine, and disarmingly chilled all the time.  ‘The kitchen is for sharing’ he said at the start, and we all wanted to share it with Ali’s ease, fine island tips and inspired rainbow hued deliciousness.  With each meal a work of art, the kitchen became the centre point, from which we would disperse to then return with our stories.

‘Super fixer Erin Knowles is the kind of sun-kissed yogi you want to swap tips and hang out with rather than wrestle down from their headstand – like a warm hug, but with humour.’

In the afternoon I nipped off to check out Spirit Festival at Atzaro, and bought a black obsidian yoni egg – while in Ibiza….!  It felt good to have a car; I love a retreat but feel it’s important to be able to carve out some solo wind-in-the-hair-I’m-away time to balance the shared.  Later I swear my third eye was fluttering in shavasana after a restorative yoga session with Suzanne Faith, our betwitchingly beautiful and deftly experienced Anusara yoga teacher for the week.  With Annabel our co-host, fresh from her travels in Guatemala and radiating additional sunshine, I had now met the team and knew I was well held.

My fellow eight guests were there for a variety of reasons – for healing, curiosity, the yoga, recuperation, or a general diet and wellness reboot. Our simple itinerary offered yoga twice a day, at 8am and 5pm, except on three mornings when we were to go hiking instead. Aside from three Ali-inspired meals, the days were otherwise free for treatments, beach explores or general mooching and pontificating on life, love and yoni eggs.

For me the hikes were the jewel in the crown, taking us up and out, and everywhere, and scratching that restless itch I often feel to escape on retreats, however glorious and spacious and calm the surroundings. Toby Clarke from Walking Ibiza and his dog Cosmo were our amiable guides – a resident and long time walking guide on the island, he was great company, and knew just the right amount of detail and anecdotes to keep everyone engaged.

The first trek took us through crackling forest and old lime kilns to Heaven’s Gate, after which we had fifteen minutes silent meditative walking through the trees. We started on a gloriously crisp and blue Cala Conte on the second hike and walked along the coast, past billionaire’s villas, small chiringuitos, a pirate’s bay and gloriously sweet fishing villages, learning about the algae and the weather and various drops of local intrigue, whilst experiencing the healing power of a good walk. Do take fruit and water. 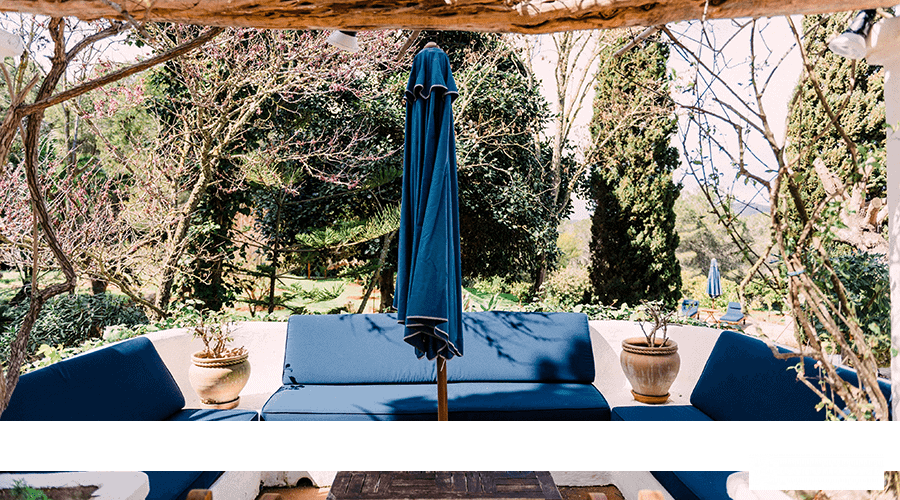 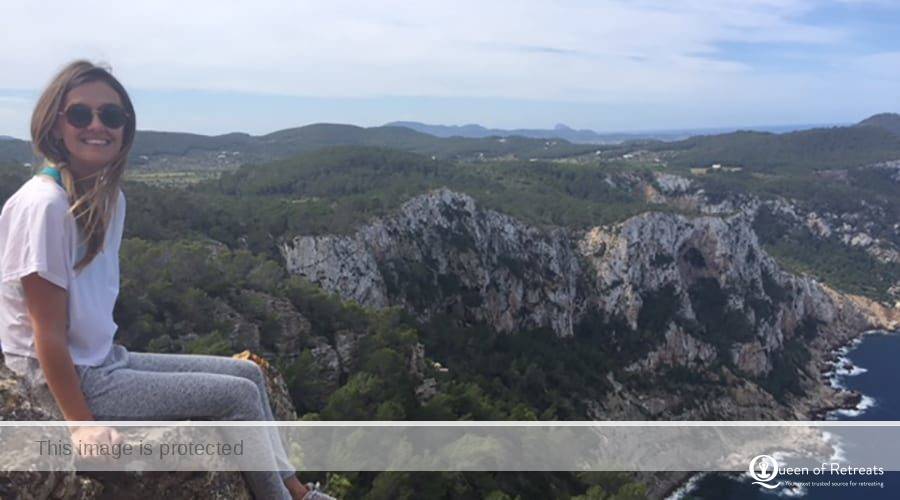 Having realised my shoulders were up by my ears, I was excited about my deep tissue massage with Kim Lewis.  A true masseuse requires technique, strength, and intuition, and Kim has these three, plus a surprising, imaginative touch, using certain massage tools to really get in there. So much so that I feel as if I have been waiting my whole life to meet a masseuse like Kim – this is the kind of woman who will knead and pummel, roll and press and niggle your body free of all its aches and woes instead of skirting the strange muscle buckling between your shoulder blades as most masseurs might.

Cranio-sacral therapy with the ethereally eyed Emanuelle was a lighter touch, and more of a collaborative process in that she talked to me about what she was picking up about my boundaries and self-criticism as she went; she was always spot on, though sometimes I found I didn’t want to talk, but to drift off as she manipulated the cerebral fluid around my body.  I did feel deeply relaxed and learnt a trick to put my body in the parasympathetic state with two tennis balls in a sock, which I thought would be helpful for my life-long wrestle for that elusive sleep muse, but I seem to be sleeping better now.  Perhaps this cleansing week with its gentle regime, love and laughter was all I needed.

The whole group has kept in touch, and we have surprised ourselves with the staying power of the change. I have been fortunate enough to experience many types of retreat, but a symbol for me that this one really affected some kind of transformation is that I have since my return kicked a long-standing addiction to morning coffee.  I feel this is symbolic of appreciating the more subtle states of being, instead of supercharging my body with a morning caffeine kick before anything else.

The My Island experience left me more accepting of all my humdrum parts in its focus on wholeness, rather than perfection – I even feel rather in love with myself now I’ve ditched that feeling that something always needs fixing. So if you’re anything less than wholly enamoured with yourself, give a kiss goodbye to that double shot latte, hunch of stress and limp croissant, and give this week a whirl. I imagine the returns will be hefty.