Hannah MacInnes reviews this mindfulness and yoga retreat in the foothills of the Atlas Mountains in Morocco at New Year and finds it a splendid, replenishing way to begin anew

Over the years I have become increasingly unenchanted by New Years Eve celebrations.  When the Christmas chaos is over the last thing I want to turn my mind to are more festivities. Don’t get me wrong, I love the idea of marking the start of another year – the hope, resolve and optimism it brings. But I would rather not do it with a tired, self-pitying haze.  Which is why I booked this escape to the Moroccan sun.

Marrakech is one of those fabulous and rather rare places which, though only three hours from London by plane and in the same time zone, provides year round sun.  Leaving behind a rainy cold UK early in the morning, by lunchtime I was cross legged beneath the olive trees wolfing down a delicious lunch, sun on my face, the Atlas Mountains resplendent in the distance.

The chance to “switch off” for six nights and five whole days could not have come at a better moment.  2017 had whizzed past in a blur of coffee, running, social media and work.  Yoga, mindfulness and phone-free evenings had become a thing of the past.  I was a typical news-obsessed journalist, regularly scrolling through my twitter feed late into the night.  It had also been a momentous year.  In June I left the BBC after over seven years working for its flagship Current Affairs programme, Newsnight. Half of the year had been spent in agonising indecision and the second half buzzing with nerves and excitement as I navigated the brave new world of freelancing.

Now I could not think of a better way to re-start.  No phone meant no twitter, no instagram, no emails.  It meant giving myself essential headspace, time to unwind, recalibrate, rest, focus and set my goals for the year ahead.  That it was New Year was merely an added symbolic bonus – the retreat would be the perfect way to do this at any time. 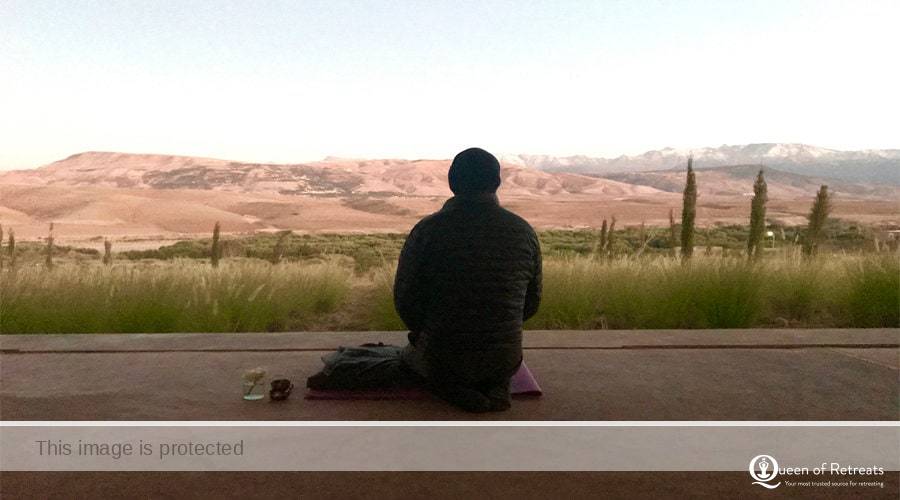 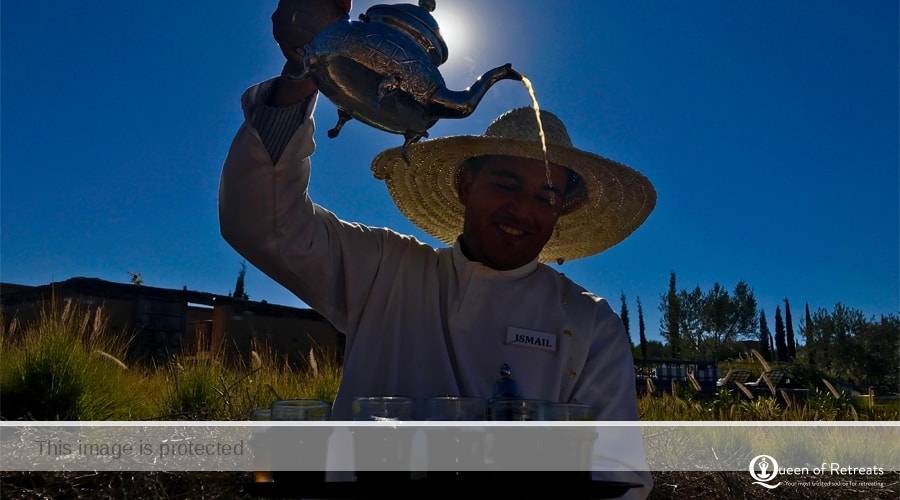 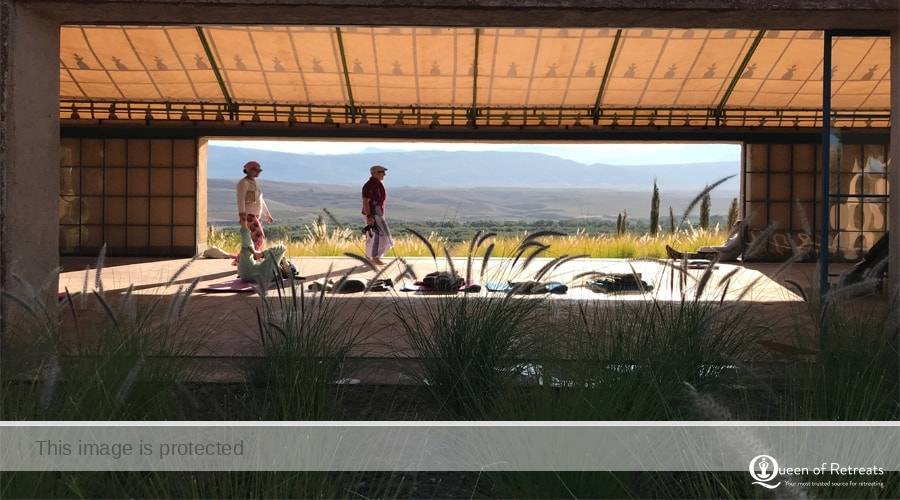 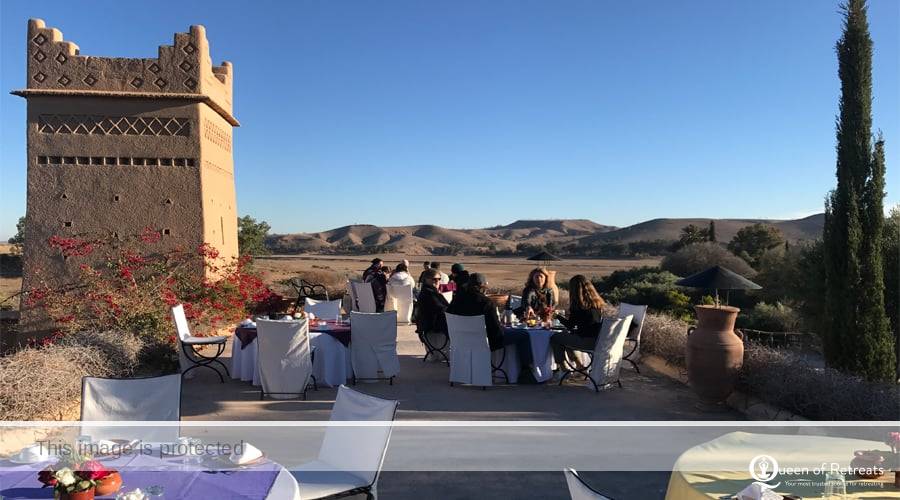 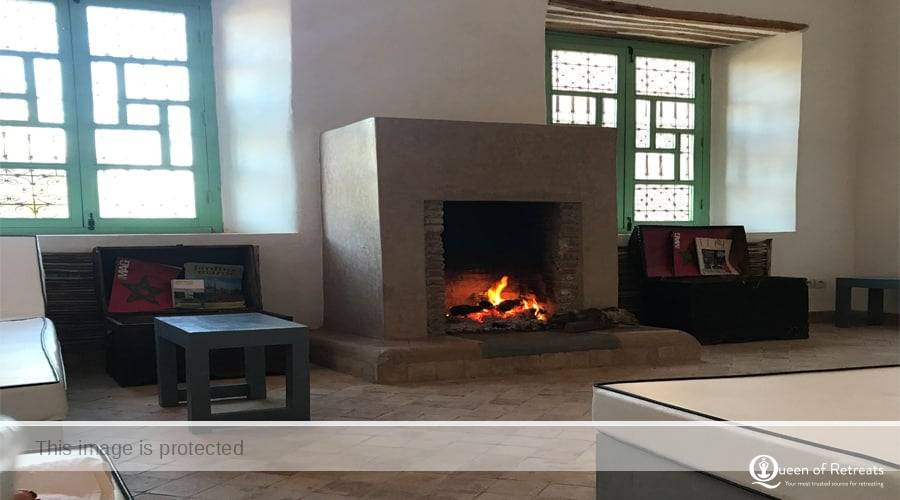 I was in bed by 10 pm on New Years Eve and this is how I began my New Years Day: up at 6.30am for a plunge into the icy cold fresh waters of the pool under a moonlit sky, then to yoga (we were all in silence until lunch time that day, the only instructed silence of the retreat).  Breakfast on the terrace in the chilly morning sun had something magical about it.  The silence only broken by gasps from the team as the lids were whipped off the tagine revealing the piping hot eggs within (each morning the same, but the thrill of appreciation from a ravenous post yoga bunch never diminished).

Writing resolutions in the sunshine by the pool was next before two hours of meditation gazing out over the Atlas Mountains.  At lunch we all sat – no one sure when and whether to break the silence.  Having filled all the glasses with water (sparkling if you please, the champagne of yogis), Brian grinned and raised a toast to the New Year.  All of us followed, breaking into a chorus of Happy New Year as we clinked our glasses.  I could not have asked for a more wholesome, rewarding way to begin 2018.  As I type it brings a smile to my face.

As a somewhat strange creature who adores nothing more than plunging into fresh icy waters, I could barely have been more rewardingly indulged.  The crystal clear, unheated pool was more or less my own private heaven (the more sane residents preferring the warmth of the heated one below).  Swimming up and down with unbridled view of the snowy peaks in the distance I felt I was in a glacial mountain lake.  Bliss!  Yoga, meditation, freshwater swimming, sun, mountain air, good food, good company and luxurious accommodation – there were times when I couldn’t quite believe my luck.

‘Brian and Shannon’s peace with and respect for one another strengthens and reinforces the harmonious atmosphere. They are entirely switched on, so you can be entirely ‘switched off’.  I could not have asked for a more wholesome, rewarding way to begin the new year. As I type it brings a smile to my face’

The hotel staff were exceptional. Staying here is a genuine luxury, a thoroughly  spoiling treat. Rooms were cleaned and beds made every day, and Mohammed and his team were always on beck and call – nothing seemed too much trouble and was always done with a smile.

Added to this was the dream team of our hosts, yoga teacher Shannon and meditation teacher Brian. Their commitment and dedication to every aspect is absolute. Their peace with and respect for one another strengthens and reinforces the harmonious atmosphere, and they compliment each other perfectly.  It is this closeness, calm and meticulous organisation, adaptability, kindness and great humour that holds the retreat together. A perfect example of ‘practice what you preach’. But at the same time they are entirely ‘on it’ so you don’t have to be, entirely switched on, so you can be entirely ‘switched off’.

This was the first retreat I had been on where I was the only Brit but certainly not the first when we were all female. We were eight because of two last minute drop outs and covered a good number of nationalities – French, American, Swiss, Brazilian, South African and British as well as a mighty impressive line-up of careers from CEO of a major online lingerie retailer to an award winning film-maker. I cherished the vibrant conversation around the table, discussing everything from social and political issues to gender equality with a healthy dose of laughter in between. 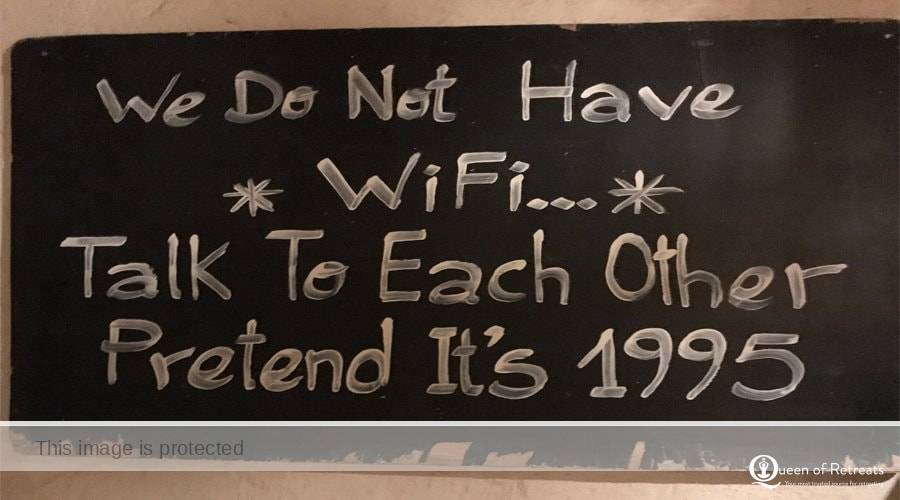 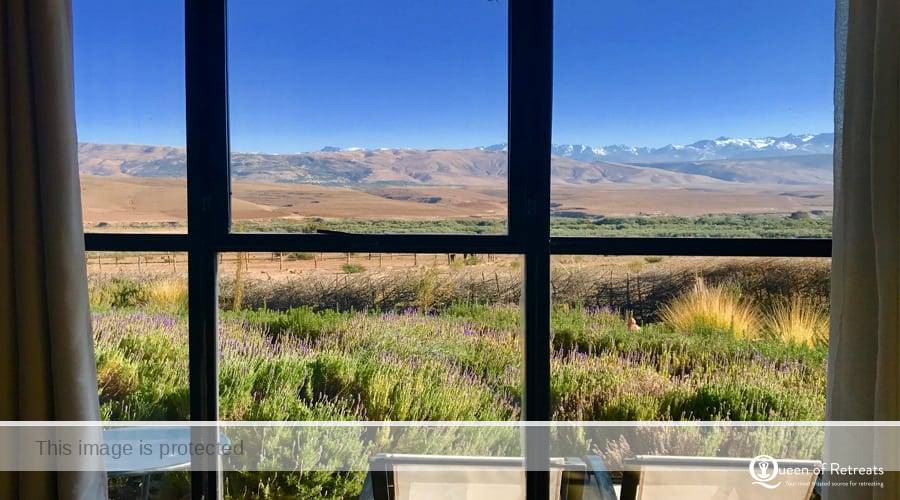 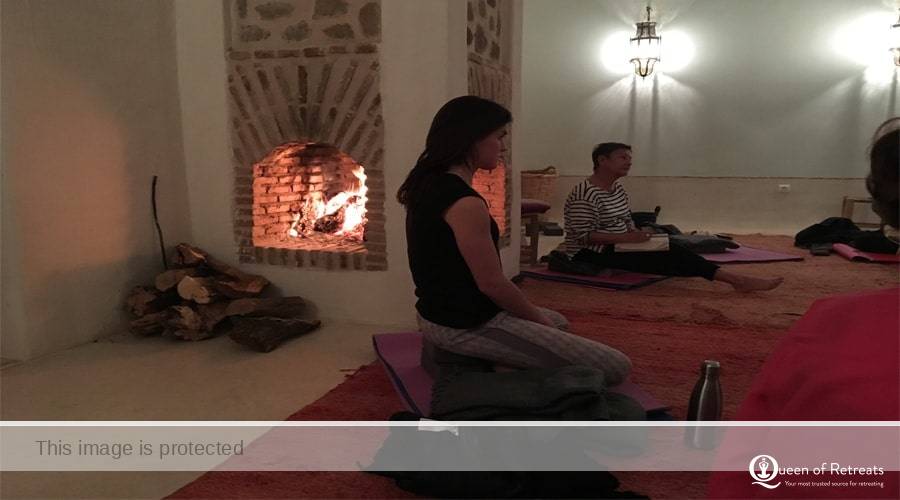 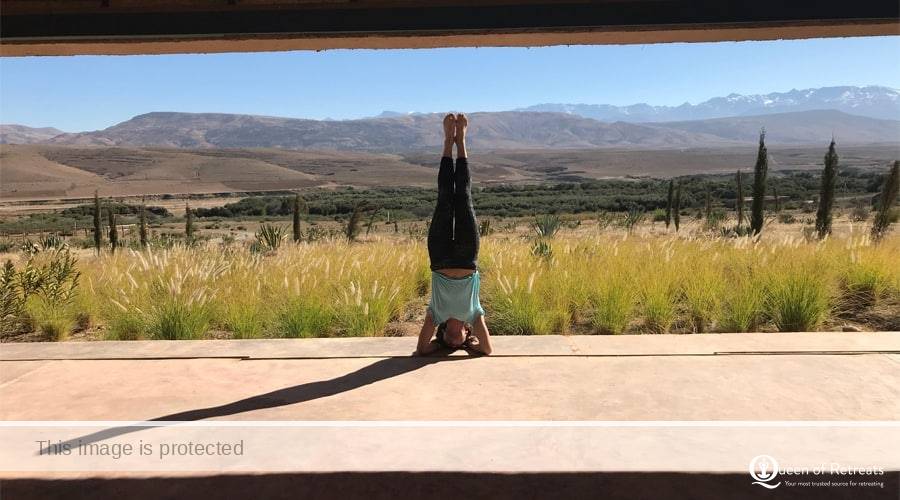 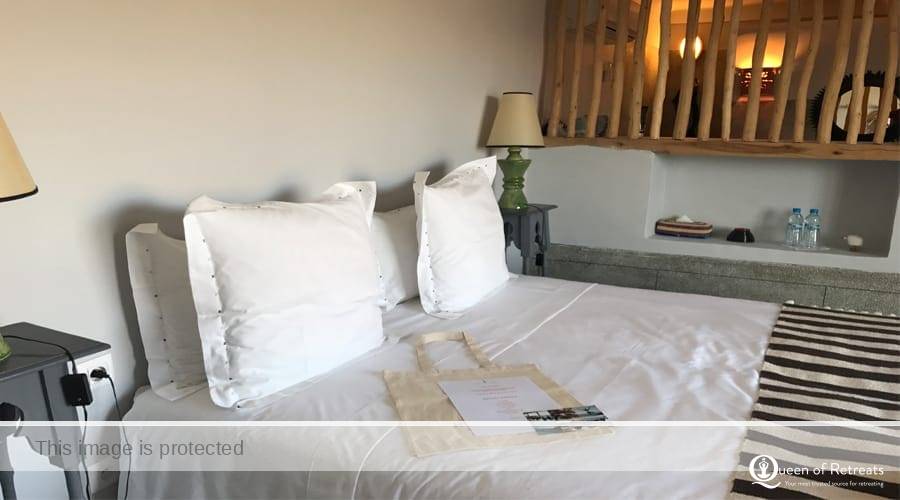 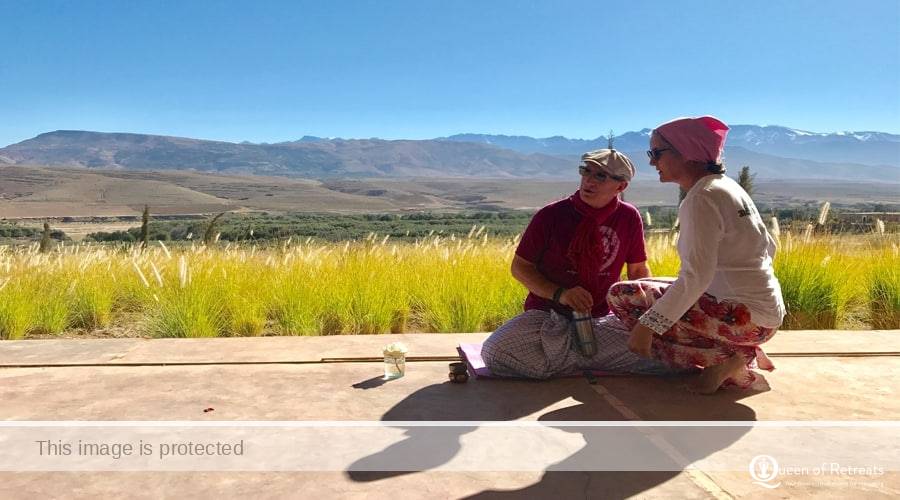 As well as wonderful new friendships, the other significant thing I took away was a far better understanding of the somewhat overused word ‘mindfulness’. ‘The whole mindfulness industry’, Brian told us during one session, ‘is ridiculous’. It forgets that the teachings come from great traditions. His teaching is grounded in such wisdom but is hugely accessible to all. It is profound and life changing but not alienating or intangible and hard to interpret as such instruction so often can be.  By instructing us to sit right, open mouthed and open eyed, to be in the moment, cultivate kindness and gentleness, he helped us all gain so very much. Your mind should, Brian tells us, soften and melt like butter. You should be so full of kindness that you could extend that to anyone who walked into this room, ‘even Donald Trump’.

Though the food was delicious, the occasional bowl of pasta for veggies (this will not be on the menu in future) and spoiling puddings meant it was not quite the ‘health fix’ I think I was expecting. I was absolutely not misled though. This is about a detox of the digital and mental kind and in fact, when I left, hugely rested and relaxed in body and mind, I felt healthier in many ways than I had in a long time. Glowing and full of energy.

Would I go back? Definitely. I’m sitting now in a freezing flat dreaming of the sunshine and chatter of the group. And though I learnt so much about letting go, I’m not sure I am yet ready to open my heart to the 45th President of the United States, so perhaps I need a second installment!