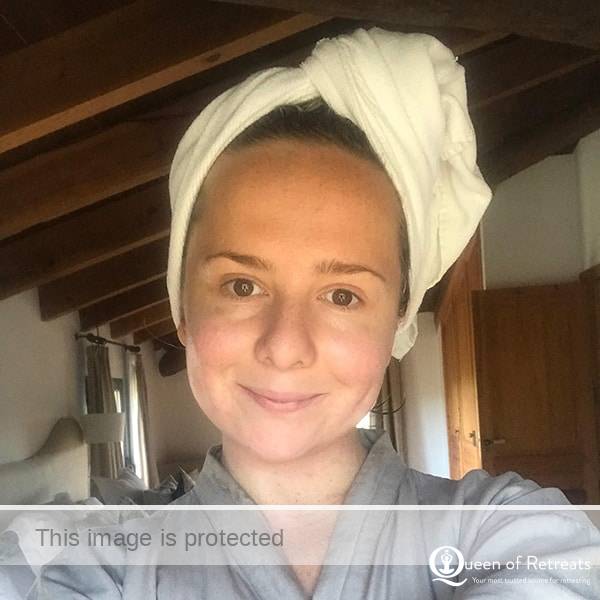 Elizabeth Bennett reviews this boutique-style wellness hotel in Spain and finds a civilised and elegant environment, transformative treatments with dedicated founder Sonia and the time and space to simply be

On the Sunday evening that I arrived at Masqi, a storm was brewing. Pathetic fallacy at its finest, my journey there had started on a stressful foot. A missed alarm, a dash to the station and a forgotten passport meant a nail biting cab ride back to flat before catching the train by the skin of my teeth. A little background: I was travelling to Masqi from Barcelona, my new home as of January, and had forgotten you needed ID to travel by train in Spain.

In fact, the first two months of the year had been a little stormy across the board.  The admin of moving country, the lengthy process of finding a new apartment, establishing a different routine and meeting new people had taken its toll. While I was slowly feeling settled, I had been feeling lower than usual and old feelings of anxiety and insecurity crept back in. I was worrying more than normal – about work, money, the future – and struggled to just be patient and go with the flow. The invite to Masqi arrived in my inbox at just the right time. 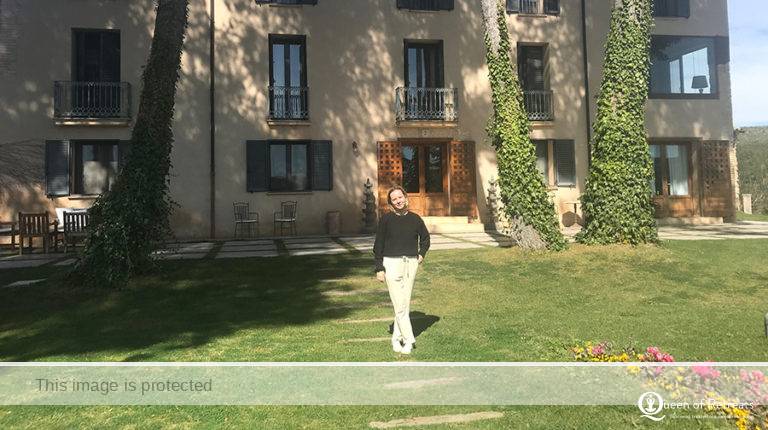 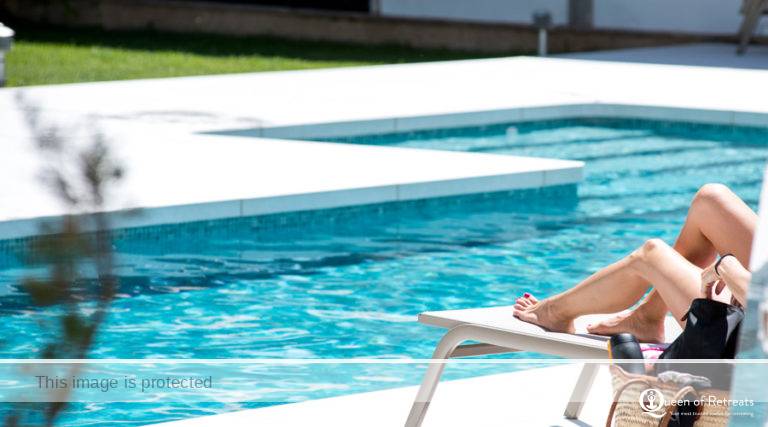 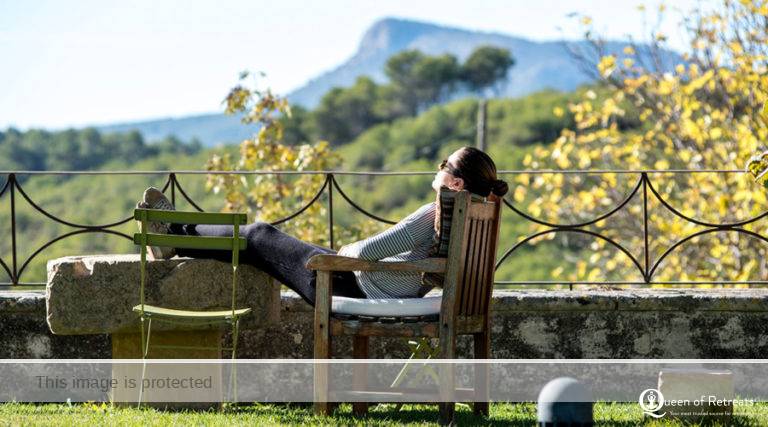 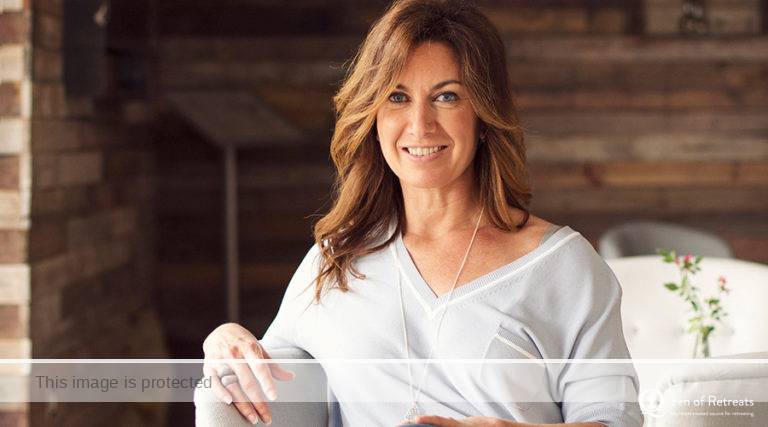 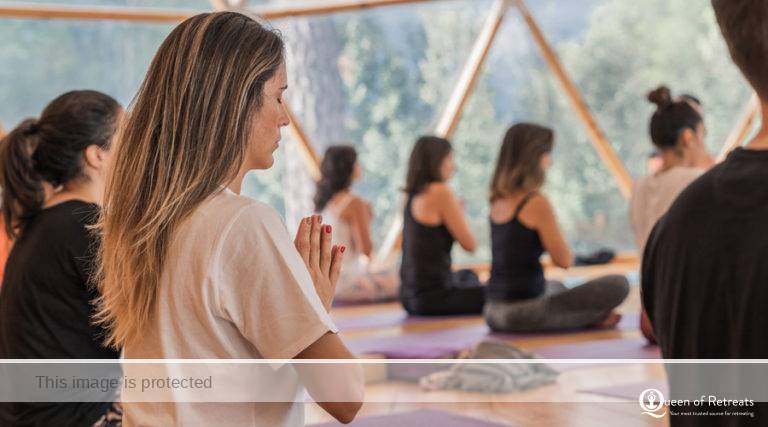 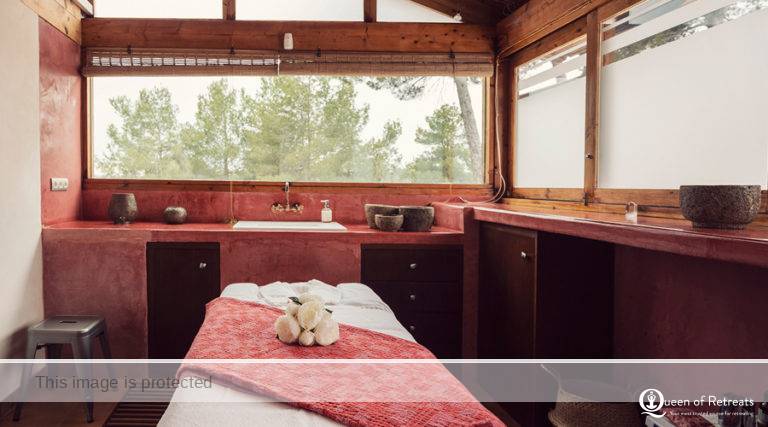 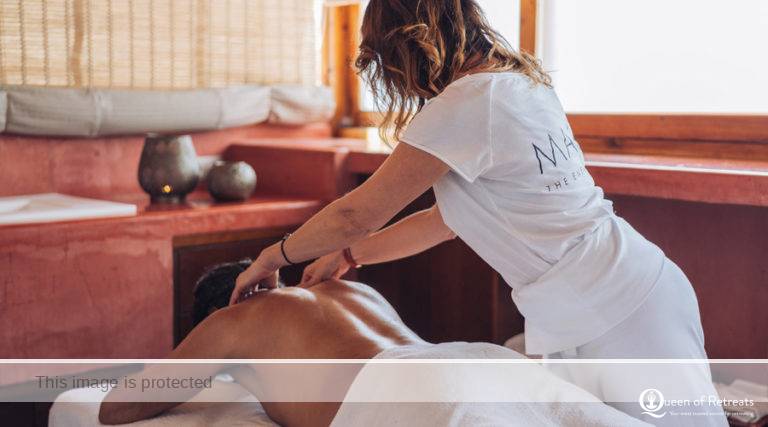 Located in a remote corner of the Sierra de Mariola national park, there is no choice at Masqi than going a little slower than usual. When I arrived at the beautifully restored 19th century farmhouse the scent of fresh lilies and a wood burning fire filled my nose and I instantly felt a little calmer. After a quick tour of the where I would be staying for next five days on the ‘Yoga Wellness Retreat’, I went straight into my first meditation session. I do yoga relatively regularly but it had been a long time since I had practised proper meditation – especially for a full hour. Held in the stunning yoga dome – a part transparent wooden structure – gave the feeling of being close to nature which really helped to enhance the tranquil experience. Switching off my cluttered brain was hard at first but the gentle teacher and his encouraging words kept me coming back to my breath and I left the class feeling more grounded already.

Next up I met Masqi’s founder, Sonia and where she told me about suffering a ‘life crisis’, finding yoga, mediation and macrobiotic cuisine, and quitting her high-powered city job to transform her own home, just outside the town she grew up in, to a boutique wellness hotel. Calling it a passion project would be a disservice – it’s now her life’s purpose and she really is the soul of the place. She goes out her way to make guests feel at home and was a supportive presence throughout my stay.

‘Masqi is Sonia’s life’s purpose and she really is the soul of the place. She goes out her way to make guests feel at home and was a supportive presence throughout my stay, and it was the therapy work with Sonia that was also the most transformative’

My daily routine at Masqi was very civilised. No early alarm calls or packed schedules, but enough planned to give a bit of structure. Each morning started with yoga – I chose the more vigorous vinyasa class at 8.30am – and finished with meditation at 6.10pm. I really enjoyed getting back into a more physically demanding yoga practice, working up a sweat and feeling that post-yoga endorphin high. The meditation classes became a little easier as the week went on and always came with advice for practising at home and a healthy dose of philosophy. “Pain is inevitable but suffering is a choice,” was one of the thoughts shared that really struck with me.

There was also plenty of free time to simply relax and just be – something I hadn’t done in a while. I loved walking in the national park and practising my bad Spanish with Sonia’s dog Lomo, making time to stop and pick up pretty pine cones that were all over the forest floor. Then I would retreat to my room to take a bath (a luxury I cannot normally indulge in) or curl up with my book in the lounge area of my top-floor suite looking out at the views (a real luxurious treat). Hours and days passed quickly – always a sign you are really slowing down.

At Masqi each guest is on their own programme and people generally keep to themselves besides a quick chat at meal times or before group sessions. During my stay there was a mix of couples and other solo travellers too (guests were Spanish, Dutch and English) but I never felt awkward being alone and in fact cherished time to myself without feeling any pressure to make conversation. 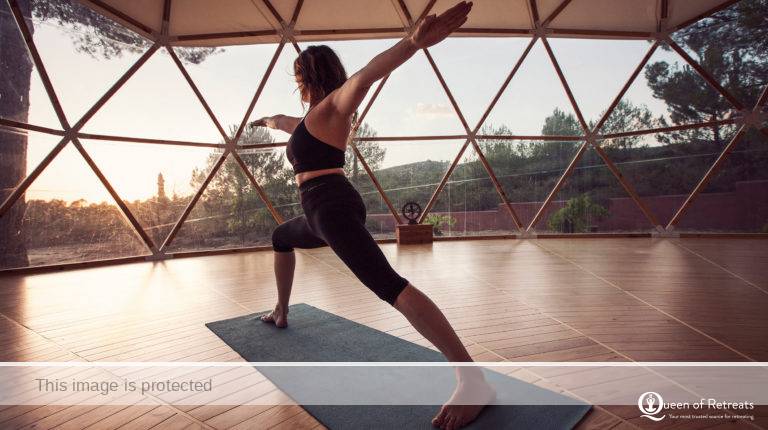 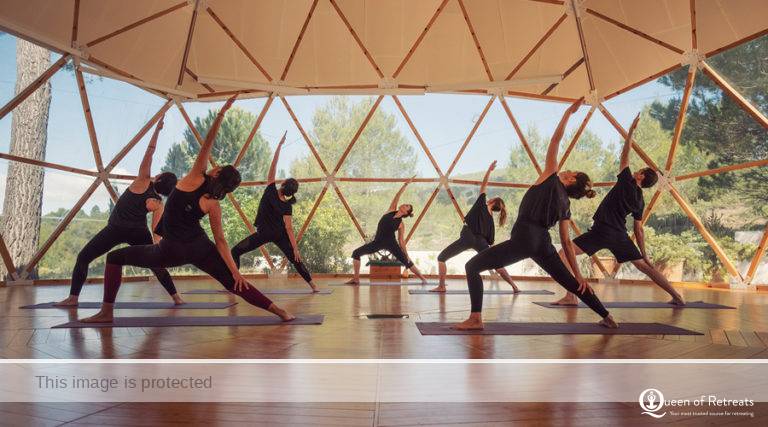 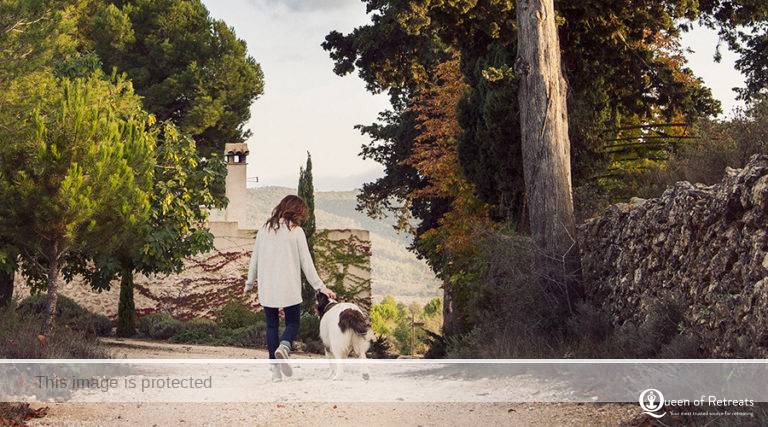 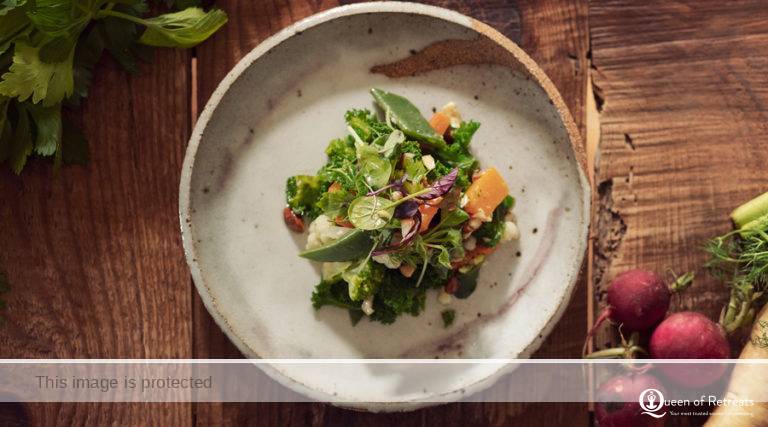 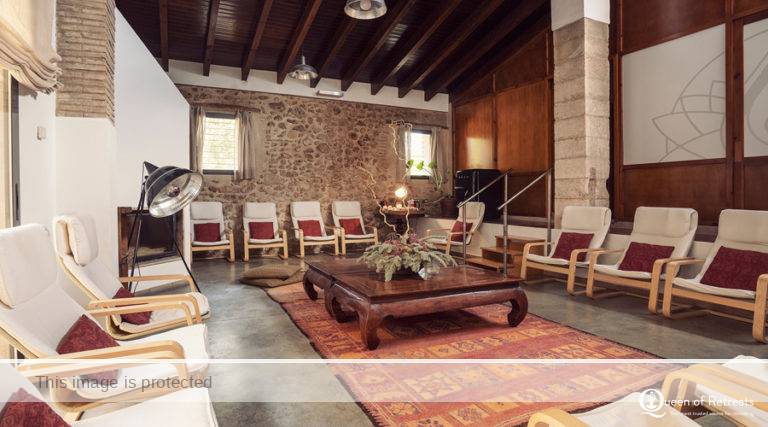 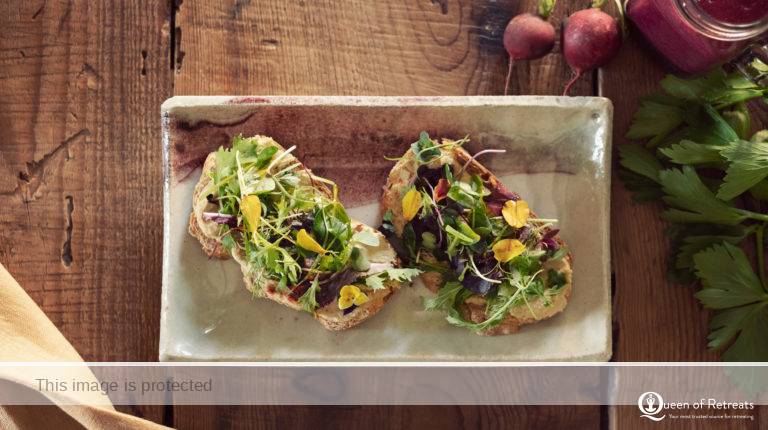 Dining solo was different to previous experiences eating alone. I would normally avoid overly fancy restaurants so eating four courses by candlelight was new for me. I felt a little self-conscious at first but it quickly became normal. I made a point of not taking my phone and instead only using my book as a back up for entertainment. I noticed how much more I concentrated on the food – a real antidote to stuffing my face while hunched over my laptop – and the delicious macrobiotic cuisine was a real highlight. Continuously creative, elegantly presented in handcrafted local crockery and just the right portion sizes so you felt satisfied not stuffed.

The one-on-one treatments were what made my stay really special. The two hour Ayurvedic therapy with Mariela (a massage followed by Shirodhara – a treatment where warm oil is slowly dripped onto the forehead) was so relaxing I found myself close to sleep while the two other more traditional massages realeased months of built up tension in my shoulders, neck and jaw.

However, it was the work with Sonia that was the most transformative. We had a counselling session where we got quickly quite deep into my fear of rejection. Sonia reminded me that we are not our thoughts and that control is something we need to let go of – both things I knew deep down but easily forget in the business of the everyday. On returning to my room, I scribbled for a good twenty minutes in my notebook about the patterns I’d been feeling but not really recognising. A follow-up energy healing session where she used a bodywork technique similar to acupuncture and breathing and visualisation exercises helped me let go of past events and shift negative emotions. I felt the lightest I had in months.

As I left Masqi on the Friday morning for my ride back to the train station there was a steady breeze blowing. More storms might be coming but I felt much more prepared to face them.