Tibetan healing yoga in the lap of luxury at Malabar Hall Harare, Zimbabwe

“No way!” and “Stop it!” were amongst my first words to Bibi Schofield when she showed me to my bedroom at her stately private residence, Malabar Hall. I hadn’t anticipated the exceptional flair and luxury of my surroundings, and this feeling of almost outraged delight stayed with me throughout my week in Zimbabwe. I would learn that serenity and style define Malabar Hall in every way, and at every turn.

I was here for Malabar Hall’s very first week-long Tibetan Healing Yoga Immersion, otherwise known as Lu Jong, the aim of which is not to achieve results through privation or boot-camp-style exercise, but rather to redefine our notion of results, full stop. It is an environment where every need is met – all you are tasked with is to embrace new ideas and practices and to be open to a shift in perspective.

When I say that every need is met, I really do mean it – even the stylish Marvis toothpaste in my jaw-dropping bathroom was colour-coordinated with the Savon de Marseille hand soap and body lotion. Each expertly prepared meal was a feat of choreography and design. My bedroom was peppered with beautiful artifacts and scented candles, and boasted a spacious living area where stood a decanter of cognac and two crystal tumblers (all alcohol is optional here).

My week was hosted by Bibi together with Dominique Caubel, an exceptional teacher based in the South of France. Dominique is a black belt in several martial arts, and in the last fifteen years has been focusing his practice and teaching increasingly on Lu Jong alone, a form of Tibetan yoga newly making its way into the West. 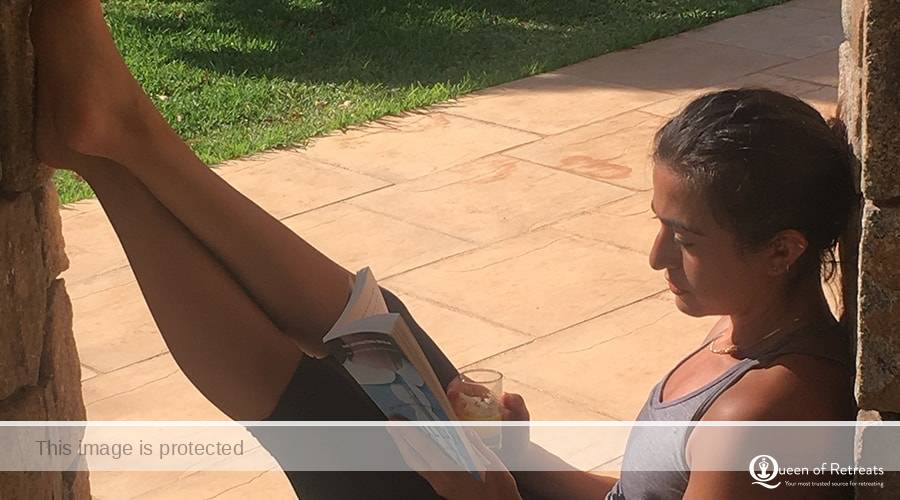 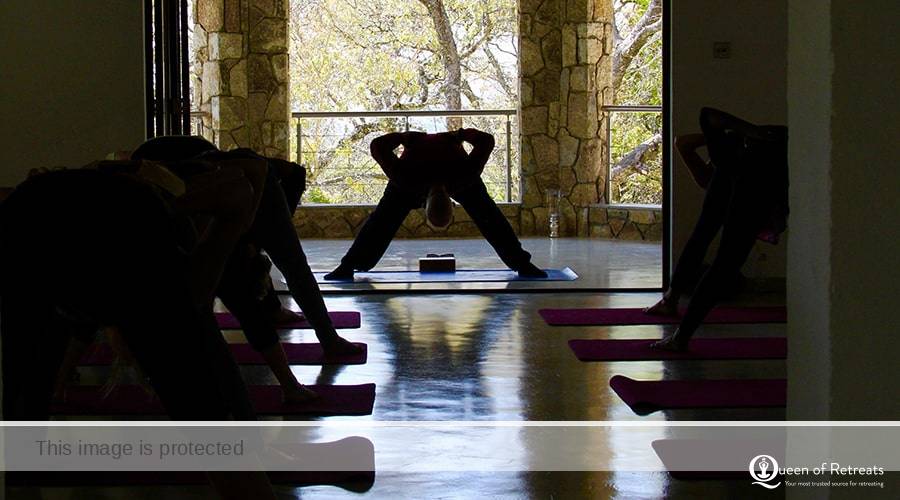 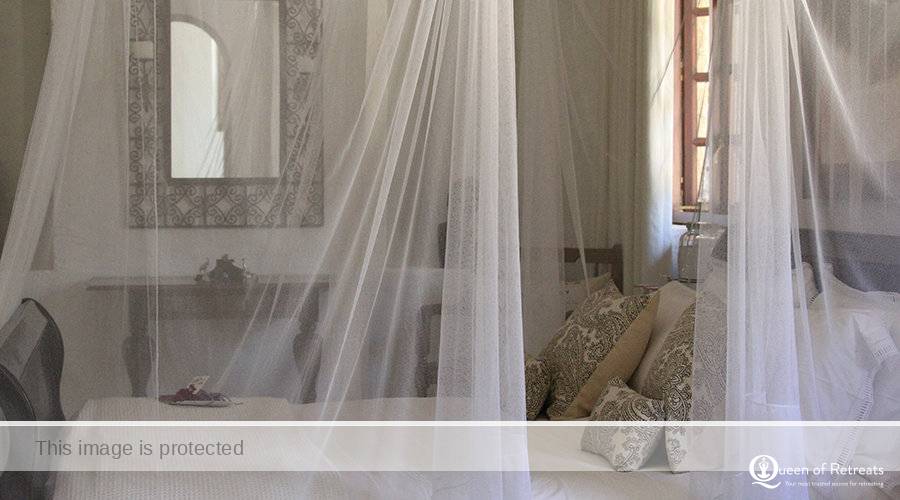 A week earlier, my neurotic concern for ‘proper’ exercise had me emailing Bibi ahead of the trip, interrogating the style and rigour of the practice. Being used to more overtly athletic, Western adaptations of Indian yoga, I had been worried that it would be too slow, too simple. I would all too soon be disabused of this idea. The precision and range of movement in Lu Jong had my muscles aching – and I could feel a transformation in my upper body strength within the week. This, partly, will have been due to Dominique’s daily dose of additional torture – a 6am plank held for five minutes. Though cruel and unyielding when it comes to planking, Dominique brings deep knowledge, perspective, warmth and humour to his classes. It’s a true joy to spend time with him.

From our planks we segued into a two-hour silent practice of the set Lu Jong postures, guided by Dominique, followed by a serious stint of meditation (building to nearly an hour by the end of the week). Silence was broken for breakfast, and then we were pretty quickly back on our mats for a further two-hour workshop at 9.30. We had little pockets of time to check email, sit and read in the sun, before summoned to our next meal – and then a longer stretch of free time after lunch, again with a policy of silence, to stretch out, take a stroll, have a dip in the pool, before regrouping for the second two-hour workshop of the day. Then time for a shower and a dust-down before aperitifs were served.

‘For me, the most satisfying and unexpected dimension of the retreat was the spirit of friendship between us all, defined by laughter, searching conversation and rigorous learning. Lu Jong forced me out of my comfort zone, and denied my inclination to go through the motions purely in pursuit of a workout.’

We were an intimate group – Bibi had invited just two other wonderful women for this first ever retreat, and we would spend almost all our time together, with Dominique, too. One is in her mid-fifties and runs her own business, and the other, in her mid-thirties, works in the charity sector. What is especially generous about Malabar Hall is that Bibi and Dominique share every part of it with you. For me, the most satisfying and unexpected dimension of the retreat was the spirit of friendship between us all, defined by laughter, searching conversation and rigorous learning.

For all that you feel pampered, you are absolutely expected to apply yourself – seven hours a day of practice and theory felt intensive, but exciting. I don’t think I’ve ever learnt so much in the space of a few days – and nor has learning been so fun. I can now practise confidently a full sequence of 21 postures, and tell you (more or less) how each relates to specific body parts, functions, organs and elements. Because it was unfamiliar, Lu Jong forced me out of my comfort zone, and denied my inclination to go through the motions purely in pursuit of a workout. For millennia, and until very recently, Lu Jong has been passed down orally, from Master to student, and the method remains closely guarded. It’s an honour to have been let in on the secret.

What I haven’t yet mentioned was just how exciting it was simply to be in Zimbabwe. The house is nestled in extensive indigenous forest, there is a great sense of space and light, the air is sweet, the birds trill, cicadas do their thing – the setting is magnificent. All of this in a country emerging from crisis, truly a road less travelled. One admission: the experience feels like a throwback to an old colonial order, where, to put it bluntly, you are served by black uniformed staff. This dynamic feels uncomfortable if you are unaccustomed to it, which I think is worth noting. 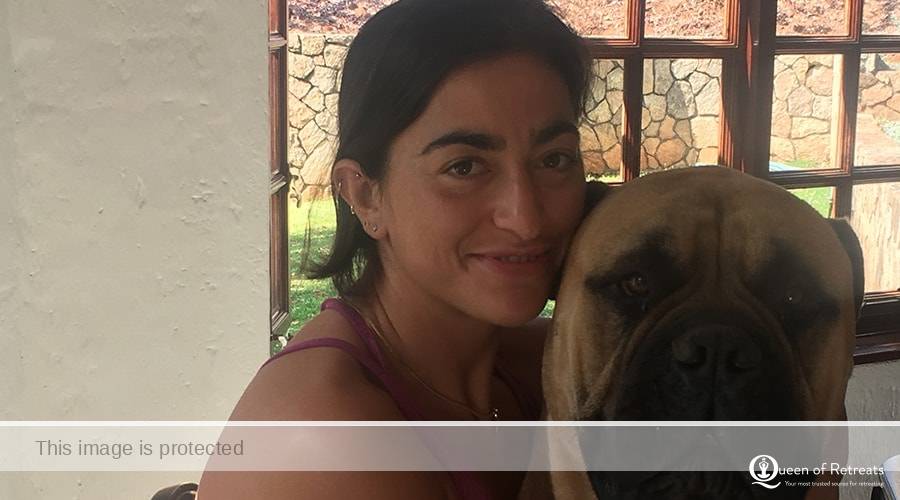 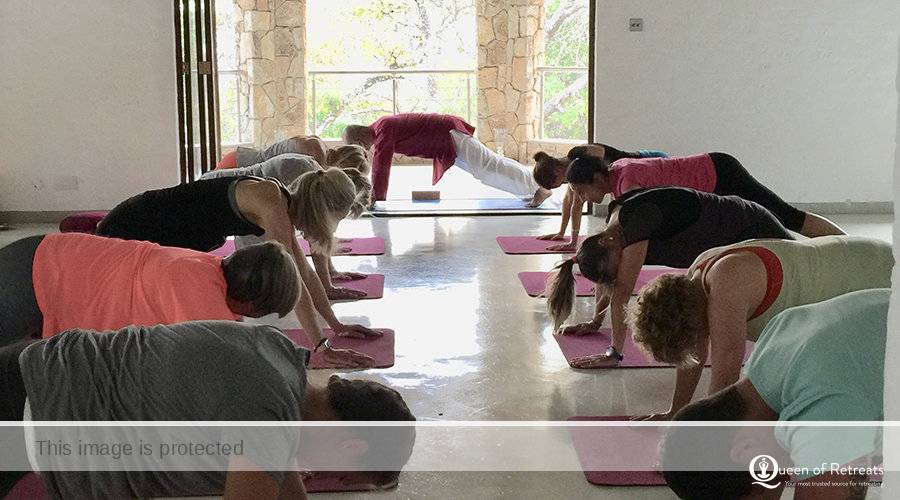 Meals were a total joy, a riot of colour: vibrant dips and salads decorated with exceptionally pretty bougainvillea and lavender, and flavours all sublime. It felt as though Bibi and Innocent, the cook, upped the ante with each passing day. Dishes sprung up from books by Ottolenghi and Madhur Jaffrey, and my favourite meal, if pushed, would have to be our Last Breakfast, where Bibi laid on a traditional Venezuelan feast (since this is her heritage) of arepas, delicious crispy maize cakes with eggs, bacon, avocado, leeks, and more…

Despite my reluctance to leave the harmonious bubble of Malabar Hall during the week, I’m grateful I did. We were taken on a couple of wonderful trips. The first was to a private animal sanctuary, where we rubbed up against giraffe and elephant (one literally wiped his trunk on my shoulder) as well as the priceless pangolin, and were served tea and cakes, and then drinks and canapés after our evening yoga practice. Ever more pampering.

On our final day, we clambered up the granite hills of Domboshawa, and as the sun set we raised a pink gin and tonic to our magical week together. The experience was a thrill, and I returned home in a state not only of physical and emotional equilibrium, but of joy.