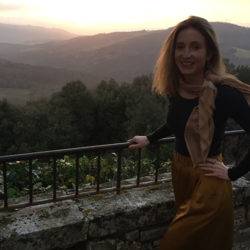 Dusky hills, piney air and the fast descending light soon soothed any crinkles from my journey as we made our way to Borgo Pignano from Poggibonsi train station. The exquisitely restored country estate, with main house and hamlet, is the epitome of everything you imagine Tuscany might be, and was catching a soft cast of golden light as we arrived, offset by rich and lofty Cyprus trees and umbrella pines. I smelt peace.

Aperitivo in the bar area was the first group meeting, after a quick photo shoot of the view, which is a mesmerising and changeable muse, depending on the sun’s languid or hot pink stance. A picturesque Francesco, with impressive Dali moustache, spiced up my stalwart Campari with pink peppercorns, and assured me that although we seemed lost to the hills, the standards were going to be high – relevant, fresh and inspired. 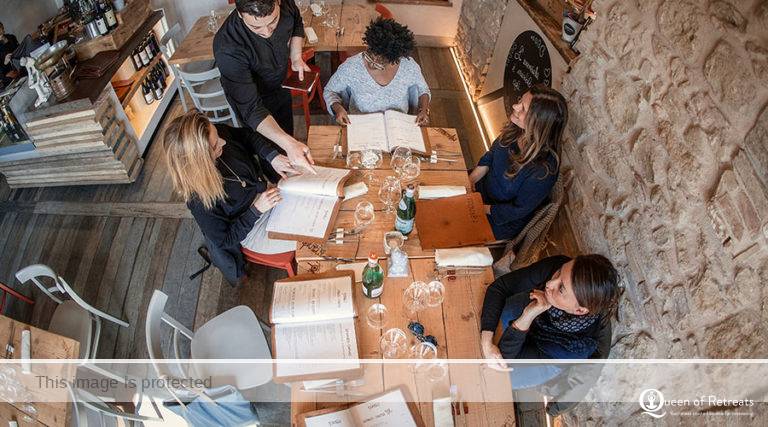 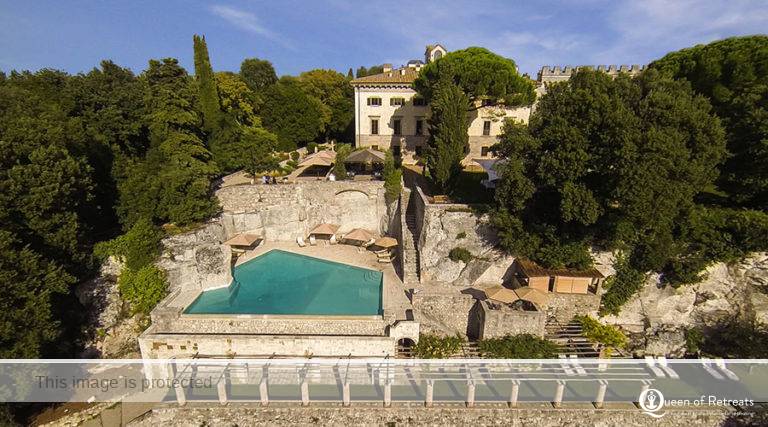 I was initially curious about how the indulgence of aperitivos, wine, five course suppers and early yoga and meditation starts would marry, but somehow it does. No part of me was deprived on this retreat – in fact every molecule was entirely nourished, lifted and expanded. There’s a risk you too may find yourself buying a leather bound notebook in San Gigamano, and scribbling Villanelles by the infinity pool, mirroring all….

Lisa Dunn, yoga teacher and founder of La Vita in Equilibrio, has been running retreats for years in Norfolk and Spain; her warmly generous and grounding manner was immediately settling. She somehow manages to be efficient without feeling formally authoritative, whilst also being that admirable combination of night owl and morning lark, so there is no shortage of energy.

Jacqui Vukman is also here, an astrological whizz from Palermo, who will inform you that you share your Black Moon Lileth with David Bowie, when she isn’t prattling in perfect Italian, or veering any conversation off onto a gloriously enticing tangent. Jacqui is also a fountain of literary and self-maintenance knowledge; I found myself tapping her for the names and details of her favourite European poets, along with how to cook artichokes the right way, after breakfast one morning.

We had a lovely diverse group, each member contributing their unique story and energy, which is the joy of retreats – from a Cambridge dwelling photographer, to a designer from Washington DC and a New Yorker whose essential oil knowledge converted me firmly to their cause for all manner of inner and outer ailments. It was a thought-provoking and inspiring trip – in which we shared our interests, passions and tips, to help reveal the highest potential lurking within…. one hopes!

‘Lisa’s warmly generous and grounding manner is immediately settling. She somehow manages to be efficient without feeling authoritative, and is that admirable combination of night owl and morning lark, so there is no shortage of energy’

In the evenings we ate at the rustic communal table, with a fire blazing at one end and the chance to dip into conversation with other guests also staying at the estate but in our group, such as beguiling wine tasters, New Mexicans on Spring break, honeymooning Swedes, the most attractive Spaniard film director of all time. It all worked in a light and easy manner – no doubt aided by the local Vernaccia white wine, which seemed to cleanse palates for the Tuscan fare and whet talking tongues delightfully.

Our beautiful schedule included optional explorations each day, such as sun-drenched wine tasting at Fontaleone, with our gorgeous guide Giacomo (what is it with Italian men…) or eating a saffron inspired lunch at another winery with dusty donkeys and enormous dogs named after Greek gods, all overlooking abstract agave plants and mystical furrowed vineyards. I think I felt the urge to run down the vineyard at one point, and followed my urge – it was that type of compelling view you just want to get closer to.

We visited San Gimignano, with a harpist dropped into the main square, and every shop a treasure trove; I got seduced by a small yellow and brown leather bag, an oak serving spoon, a leather bound notepad, and some truffle infused oil, all of which still make me happy when I think of, see or touch them. My hazelnut and pistachio gelato at world renowned Gelateria Don was full of craft and densely chewy magica.

I slipped out of soap-making one day at Borgo Pignano, to then regret it forlornly when I saw the resulting stunning natural soaps pressed with dried flowers. But we can’t do everything, and I wanted to run down the Cyprus lined drive, listening to Il Nozze de Figaro on my ipod and feeling somehow gargantuan, all powerful, as when the world is undulating away from you in sun-kissed tones it feels there is little that isn’t possible. I spotted my future home, perfectly situated by some water, with a dotting of trees, not too flashy, but blessed by the immensity of nature all around – now the search for a 6ft4 Italian who might be interested in sharing it can begin! 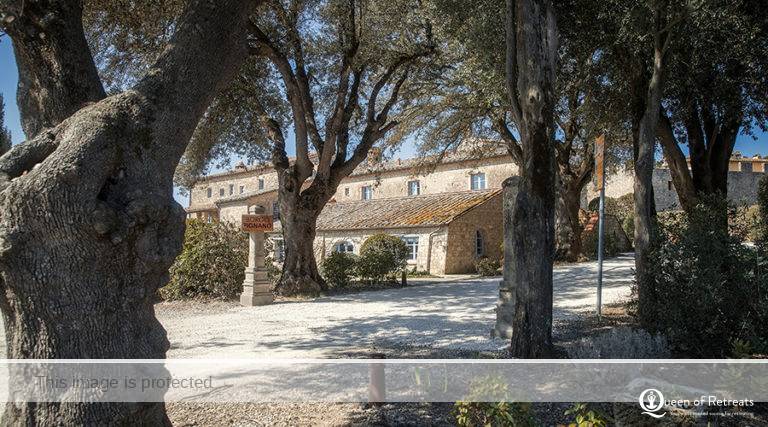 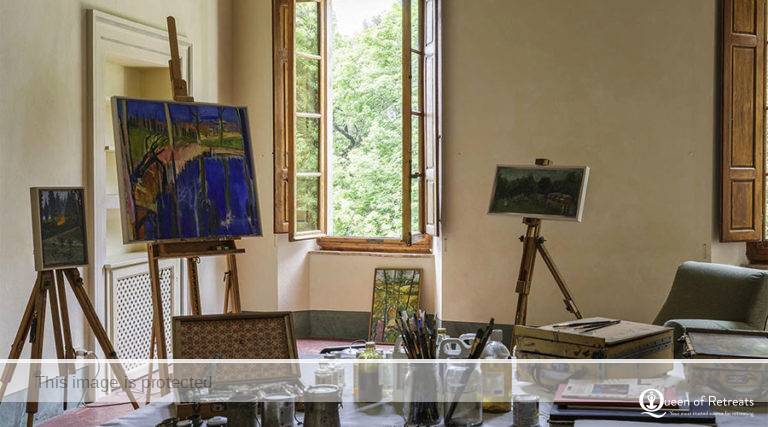 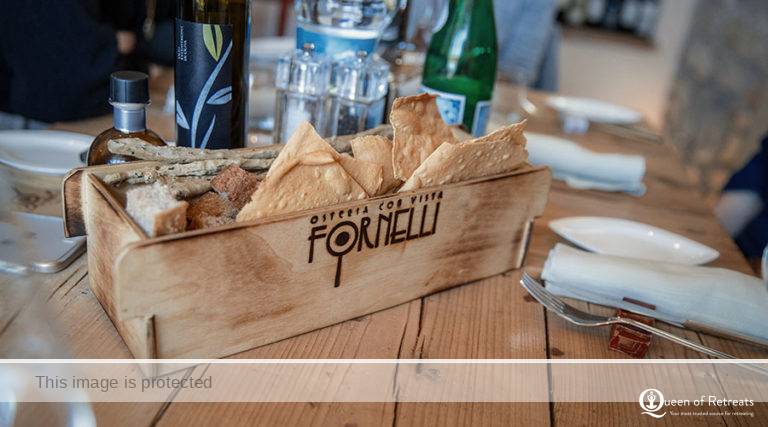 I soon began feeling very well on this retreat, (despite the extremely hearty Tuscan fare), partly as it is such a special place to be. Personal touches abound: painted murals on the walls; a white spidery merino glass lamp in the art room where you can also pick up a paintbrush; beautiful lemony green and chartreuse blue colours that catch the light; a sprig of rosemary on the turned back bed. The staff are fabulous – and mostly called Francesco, which helps.

The yoga starts to each day were wondrous. As an avid yoga practitioner I was pleased Lisa combined well adjusted warm-ups and hip openers, with more advanced inversions, twists and balances. We had a one on one session one day in which she provided some invaluable tips for my tumbling side-crow and banana forearm stand. Lisa is wonderfully willing to help nothing feels too much for her, and I felt truly attended to.

It’s hard not to feel infused by the beauty of a place like this; it washes you through, and I enjoyed time alone, sitting in various spots, and exploring. The verdant and infinite views gave me space to contemplate my own life, and I found solutions floating up, and problems blown free by the Tuscan wind. I also insisted on swimming in the sub zero infinity pool, which caused a bit of a Tuscan fuss – I had to sign a disclaimer. (Italians are curiously law-enforcing I notice – my friend thinks it is on account of them all being a little shifty at heart). But I just wanted to dive in and be a part of it, which is exactly my sentiment towards the whole of La Vita in Equilibrio.