Connie Allfrey reviews a Jiva Healing detox retreat at Yuva retreat centre on the Turkish coast and through juice fasting, yoga, treatments and expert support from wizard of nourishment Rebecca Andrist returns to her light-hearted, light-footed best self after too long a separation.

I arrived at Yuva Eco retreat centre feeling less than perfect – my gut had been bloated and blocked all Summer, which was affecting my mood and clarity. Tired and grasping, I think I made three trips to the Pret counter at Gatwick while waiting for my flight, mostly on theme with the preparatory cleansing, until the final caramel popcorn bar, which seemed fairly inoffensive until I read the extensive ingredients on the back.

A three and a half hour flight from the UK and one and a half hour transfer later I arrived at Yuva in the dark under a thorough shaking of stars, having been decamped with fellow retreaters from our mini-bus into two land-rovers for the steep descent to the sea. Two Turkish friends, Irmak and Esa, shining like linseeds in the night, took our bags to our rooms, and I crashed out to the sound of lulling waves. 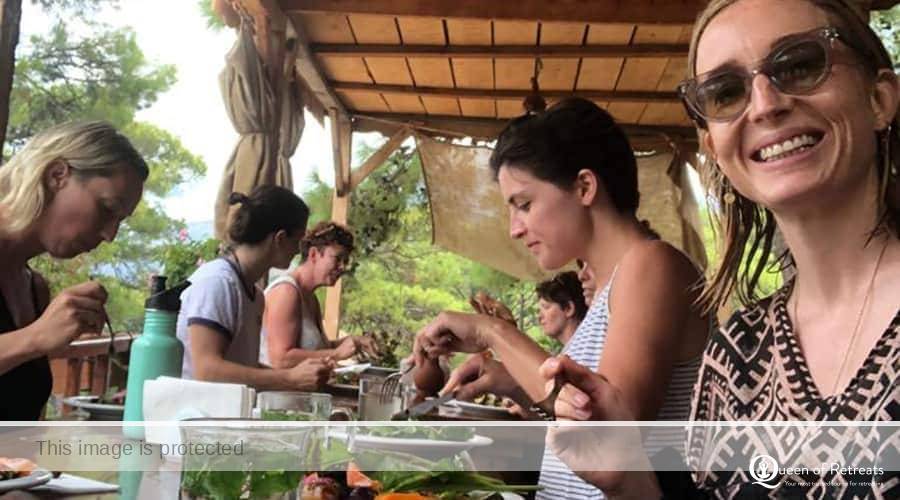 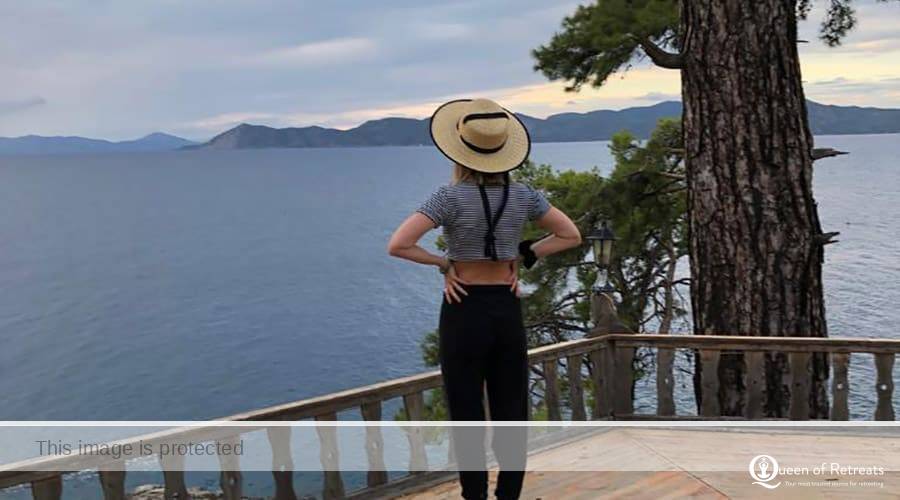 Morning revealed a spectacular view of tall winnowy pine trees, leaning down to a robust and sparkling sea, sleeping mountains in the distance and a delicate aroma of white sage, but the first day was a bit jolty and narcoleptic as is often the way after flying. We had our first green juice at 10 am – sort of delicious, but terrifyingly liquid and short-lived – followed by an introductory talk by our host and nutritional guide, Rebecca Andrist. Originally from Canada, Rebecca leads an enviably peripatetic life, and seems more from the entire unbound world than any particular place in outlook; her relaxed attitude, buoyant laugh and informed presence permeate what might otherwise have been yawning cavities in the food-deprived week. She fundamentally believes in the work, and helped steer me through a few tricky fasting times, even rubbing my inflamed tummy to prepare it for a castor oil pack at one point.

I felt unbelievably tired the first day, perhaps from the travelling, the detoxing, not having my morning matcha, or being suddenly overwhelmed by the cold restrictive prospect of not eating for a week. Despair. My head trilled with headaches and I slept badly, owing to gnawing emptiness and feeling a bit trapped in my hut and decision. Next day I felt more enlivened though, and understood the routine – yoga at 8.30, juice at 10, nutrition class at 12.30, juice at 1.45, restorative yoga at 5.30, spell-binding sunset at 6.30, broth at 7pm, with the hours in between to walk, swim and lie flat on our backs in the sun, feeling virtuous. The morning juice provided enough oomph for the short walk to the sea, where I actually gasped when I saw the flat wide stones, the distant mountains, a few bodies strewn across the rocks, the Prussian blue, glimmering and inviting water with a lone white boat inscribed ‘We dream’.

‘Our host and nutritional guide Rebecca Andrist fundamentally believes in the work and helped steer me through a few tricky fasting times. Her relaxed attitude, buoyant laugh and informed presence permeated what might otherwise have been yawning cavities in the food-deprived week’

Restorative yoga in the evening allowed my body to unravel in longer held yin poses with some gentle flowing Qi Gong. Lys Wild, our instructor, was attentive and friendly, integrating her different trainings of Hatha, Release and Contact yoga so that her gentle classes were always evolving. Morning yoga included an intense hip opening sequence and some sun salutations – I am used to a more dynamic practise in London, so sometimes felt a little frustrated, but then Lys would show me a stretch that got right into that area of the back that is so hard to reach and I would be mollified. Others, especially those more unwell, found the pace suitable for the fasting, so I just self-practiced on the yoga deck to hot pink sunrise streaks a few mornings, which felt a biblical alternative.

My sea-bungalow was actually a semi, but other than occasionally bumping into my neighbour on the terrace, normally face down on our loungers after ‘lunch’, it felt completely private. The room was simple, but soulful and homely with colourful rugs on the boarded floor, and hangers latched onto the latticed walls to put summer dresses on. I felt perfectly content and catered for, the care and daily housekeeping feeling five star, even if the accommodation was basic – and the softer pillow and bathmat I asked for appeared immediately.

The days unfurled fully, if empty on the stomach; I abstained from the hamman trip to avoid getting in a car, but relished the boat trip, swimming in and out of cold water caves that felt like the mouth of the earth, before reading my book on Paradise Beach, the mystical mountains seeming to smoke above us, and the most beautiful water to enjoy, fringed by green and luscious beauty. The traditional Turkish facial, with its delicious aroma of wild herbs, was also a highlight, transporting me to the sweet surrender of being a child again when Attila’s sister washed the clay off my face with a hand and a bucket. 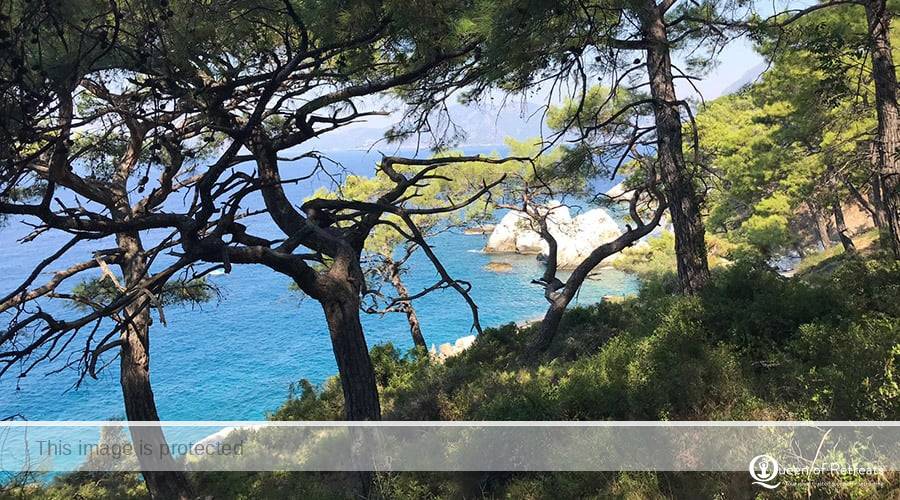 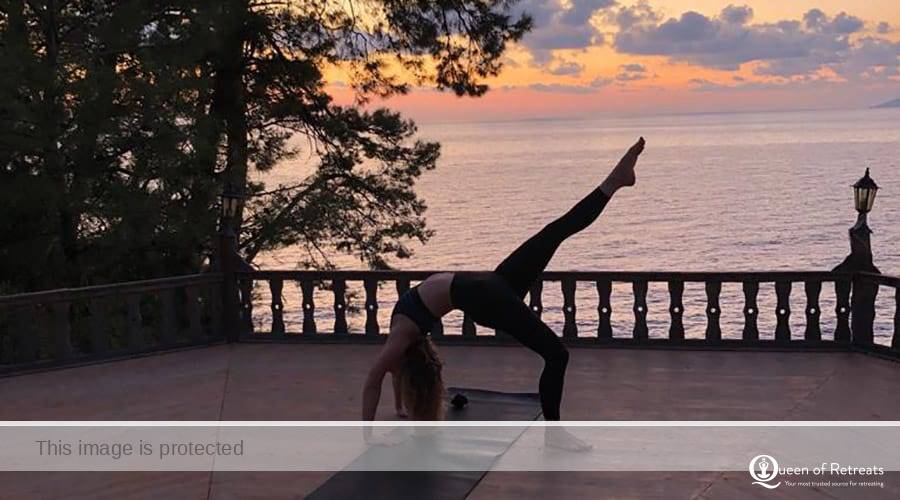 As for the detoxing, the daily morning coffee enema was more thrilling in idea than reality for me, for there were no great surprises, no tapeworms in the cistern, the coffee just came in and went out. This continued all week, and I found myself jealous of what other people were recounting they had relieved themselves of, while my stomach remained hard and compacted. The rest of me was beginning to flourish however – my skin glowing and taut, eye whites duck egg blue, mood lifting from the doldrums, body ever-easy and limber. I broke the fast a day early on the Saturday, as felt five days was enough – that first taste of gentle vegetables with a little tahini was sublime, and my gut seemed miraculously to relax and re-order itself after its reunion with roughage.

I found myself both reluctant and ready to leave at the end of the week in equal measure; we ate our packed suppers of stuffed vine leaves and vegetables mindfully in the airport together. And later I found myself overwhelmed with emotion on the flight, like something significant was passing and my body was sighing, or crying with relief; it felt like I had in fact been healed and was experiencing my best self after too long a separation – light-hearted, light-footed and free. Two weeks home and my gut is singing like a new engine, with the 2kg I shed seeming to have stayed away. I now understand why Rebecca has so many return guests – the spirit-soaring feeling from this internal spring clean is the greatest high on earth.