Facing up to my weight issues at Homefield Grange, Northamptonshire, England

Nirpal Dhaliwal reviews a 3 day Weekend Reboot at Homefield Grange health retreat in Kettering, Northamptonshire and gets the much-needed and highly effective kick up the backside he needs to face his weight issues head on.

My midlife obesity arrived as Hemingway described a character’s slide into bankruptcy, ‘at first slowly, then all at once’. Bad and unconscious eating habits culminated in me reaching 45, seemingly suddenly, and seeing in the mirror someone I barely recognised at an age when being so overweight is a lethal risk to be taking.

I was still in denial when I arrived for a 3 day Weekend Reboot at Homefield Grange, a luxury health retreat situated in bucolic rolling countryside a few miles outside of Kettering. Billed as a ‘gentle introduction to detoxing’, it seemed ideal for me, a complete detox beginner, and someone who routinely orders a large gin-and-tonic and packet of cigarettes as soon as I arrive at a mini-break destination.

I had no inkling of the existential crisis I was to face only an hour later. 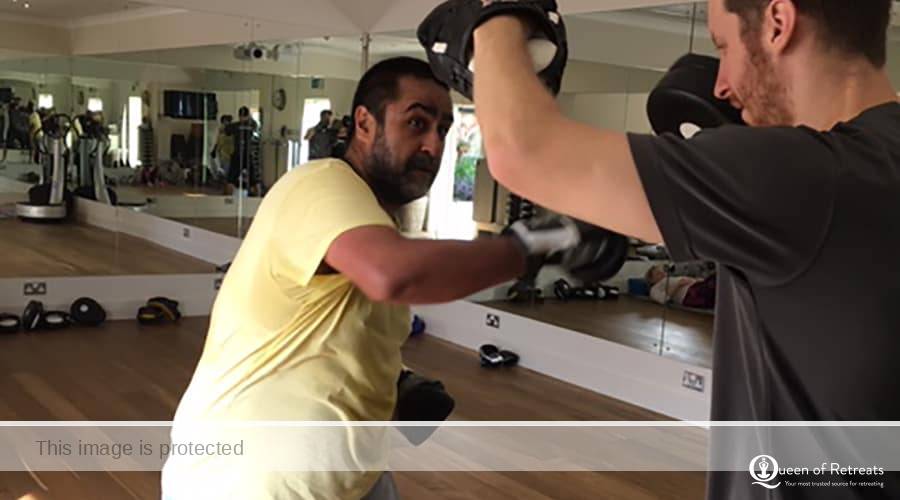 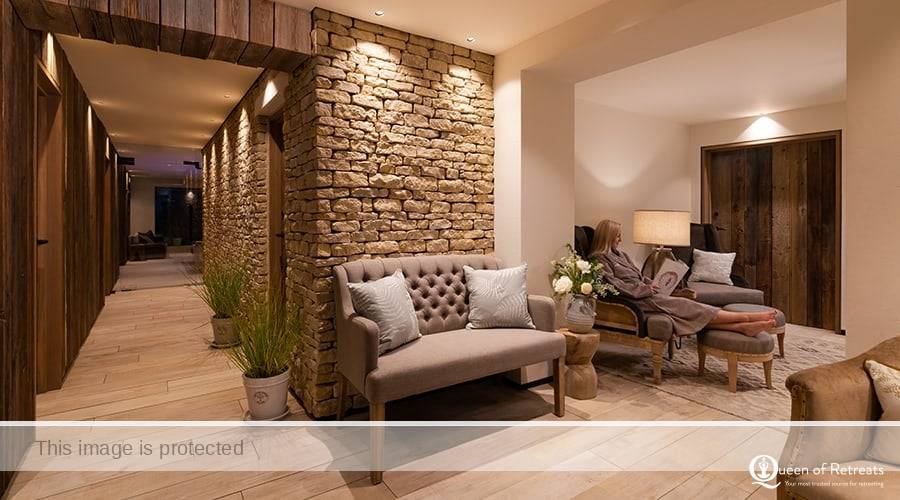 Taking the health check-in, I was weighed and measured and had my pulse taken. I hadn’t stood on a set of scales for many years, not wanting to know the truth about myself, and was stunned when the digital machine issued a printed note that told me I weighed several stone more than I did in my twenties.

Having hidden from reality for so long, and on realising the truth, I went into an immediate funk; the news hurting as much being sacked or dumped by a girlfriend. I wanted to hide in bed with a packet of chocolate digestives. Thankfully, there was no biscuit-tin on-site.

I had a spacious Premiere Room at the top of the farmhouse, overlooking the cobbled courtyard and the fields behind the retreat, with a very cosy king-sized bed, ensuite bathroom and shower. Generic and not very characterful – not unlike the best rooms in an airport hotel – it wasn’t an ideal space for contemplating my fragile mortality, now that I’d finally been confronted by the fact that I was dangerously overweight.

It was a traumatic realisation that gave me sleepless nights throughout the weekend as I fretted about the illnesses that I was now exposing myself to, and the radical lifestyle change I needed to implement. Thankfully, the weekend showed me that drastic change is entirely possible.

‘The weekend was an emotional rollercoaster for me – no doubt, because of my sugar withdrawal – but I never felt hungry. I left the retreat half a stone lighter and on a massive high.’

For three days, I breakfasted on specially designed vegetable juices – the recipes, a secret – lunched on light but interesting and tasty salads, and dined on soups. It was a vegan, sugar-free, no-carb intensive, and I’d done nothing like it before, but found it surprisingly easy. The weekend was an emotional rollercoaster for me – no doubt, because of my sugar withdrawal – but I never felt hungry. The small meals were created to give my body what it needed, and while I might have craved comfort, I didn’t feel weak or any pangs of hunger. Indeed, I exercised a great deal.

With a well-kitted gym in the barn, morning instructor-led Nordic hikes, yoga and fitness classes, there was plenty of physical activities on offer. Nordic walking – a sort of regimental cross-country march using poles – was a good way to enjoy the rural surroundings as we hiked across cornfields and into the woods in crisp early sunshine. The yoga sessions were very gentle and open to all levels, and very soothing. While the boxing session I had put me through my paces more intensely than any workout I’d had in year. Luckily, a well-administered sports massage in the retreat’s idyllic spa – offering a full menu of pampering treatments – made sure I didn’t stiffen up or get sore the next day.

I was the only male guest during my stay and felt very at ease with my fellow residents, who were very enjoyable and interesting company, including an obstretician, a psychotherapist and a business-psychologist. Mealtimes were often stimulating, and a very welcome distraction from my anxiety. There was also plenty of space to have time alone, be it in the garden or the large couches in the lounge. I also calmed myself by watching the horses and alpacas in the surrounding fields; the presence of animals definitely helping me to relax. 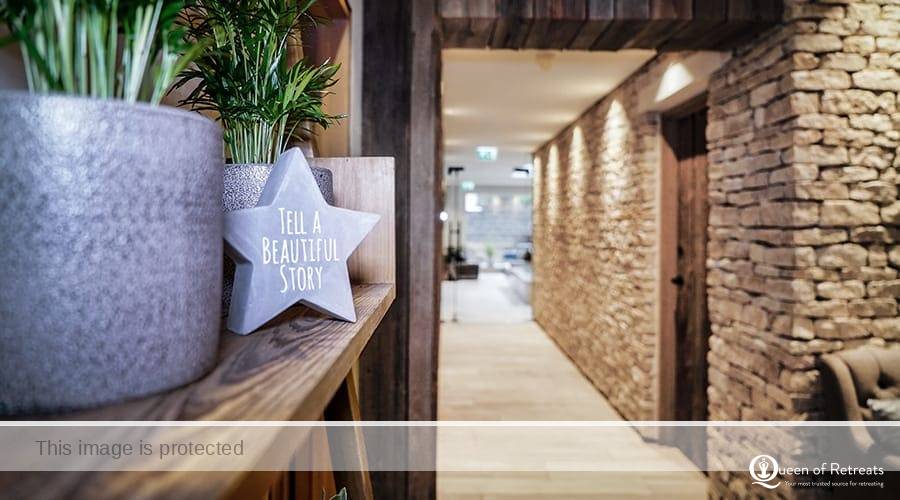 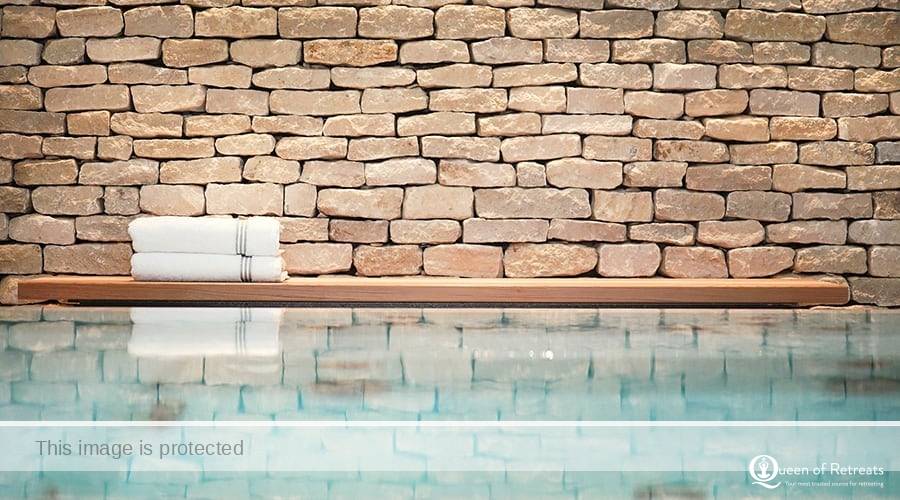 The lessons on how to cook and eat more healthily were very helpful, teaching me how to shop more discerningly and informing me just how much sugar is in regular processed foods. In fact, learning about the near omnipresence of sugar in our society was quite terrifying, as was the movie the retreat shows each Saturday night. Called That Sugar Film, it was a Super Size Me for the sweet-toothed, and explained just how toxic sugar is for the body and mind, and how it’s addictive power has been exploited by big corporations to hook society into eating vast amounts of it, putting it in everything from sliced bread to chicken curries. It amounted to nothing but a mult-trillion-dollar global conspiracy, and I’d been suckered into it along with billions of others.

During the weekend, I also underwent a ‘live blood analysis’: a single drop of blood, from my finger-tip, analysed under a microscope to give me a general on-the-spot overview of current levels of acidity, general organ function, blood-sugar and hormonal imbalances, deficiencies, and how my body is metabolising fats, proteins and nutrients. Unsurprisingly, I showed indications of having too much sugar in my diet, and also symptoms of lacking various vitamins and not processing toxins effectively. The evidence against my lifestyle was now irrefutable.

Devastating as I found all this bad news about my body, I left the retreat on a massive high. After three days of eating so cleanly, with lots of exercise too, when I was weighed-out on my final morning, I was amazed to be told I’d lost half a stone: more than three kilograms lost in just three days! It was exactly what I needed to hear, and I left the retreat not only significantly lighter but also inspired by the knowledge that a drastic change in my diet and body was absolutely possible.

On returning home from the retreat, I’ve almost eradicated refined sugar from my diet and stopped snacking. A month afterwards, I found I had lost a further stone. The retreat was a blessing, forcing me to look at the state of my health, and then getting the ball very much rolling in the direction of improving it: a much-needed and highly effective kick up the backside, for which I am deeply grateful.