A week of magical thinking at Bliss Body Retreat near Ubud, Bali, Indonesia

Zoe Ross reviews a wellbeing retreat at Bliss Body Retreat near Ubud in Bali in Indonesia and finds space to truly slow down and cleanse on all levels.

Arriving (not so) fresh from a long-haul flight, with an hour’s sleep under my belt, and being ushered straight to the lunch table was an inevitably discombobulating start to my week in Bali. But things could have been worse. Once my nerves had begun to defrazzle, and a few notes of halting small talk with my five fellow guests had been exchanged, I took a proper look around me, and found myself in an otherworldly crucible of green.

From the villa, your gaze tracks descending paddy fields, before sweeping up into panoramic jungle. It’s wall-to-wall green. As the week progressed, our host Vlada talked a lot about the vibrational energy, or prana, both in ourselves and in our environment, and there is no denying that this spot pulses with prana. Not enough prana, it turns out, to keep me from falling asleep in various supine poses during Monday and Tuesday’s evening yoga classes. But still. 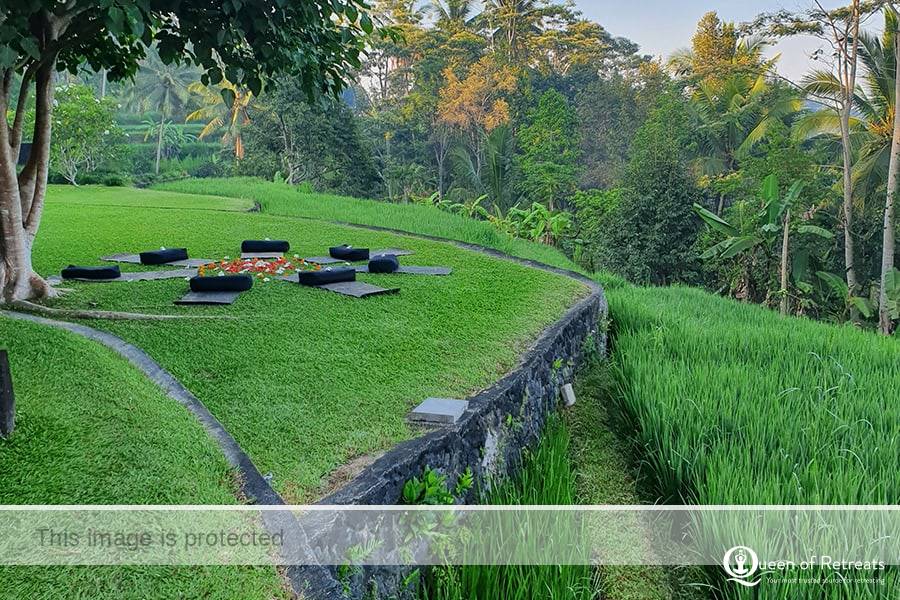 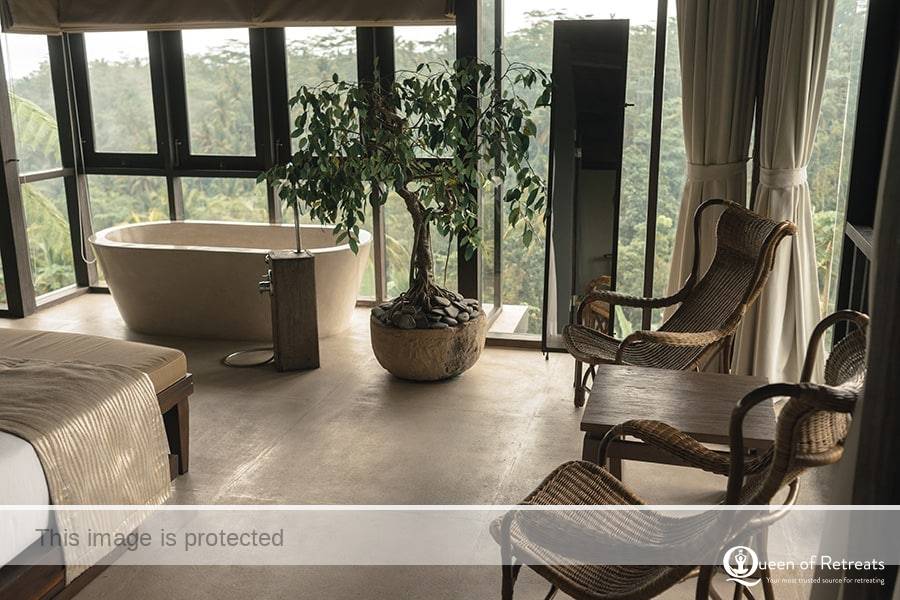 On arrival we were given notebooks, and told to bring them to yoga every day for journaling exercises. This was not music to my earnestness-resistant ears, and my early journal entries are testament to this: “tired, impatient, restless limbs, can only think of sleep” and, clearly feeling pressure to appear as busy as the others scribbling away around me, “la la la la la la just write something down”. But looking back over my entries from the week, it’s pretty interesting to track the shift. I was, by the end, sailing pretty close to the edge of earnest. The fact is, to enjoy this retreat, you simply have to let go of cynicism and judgment. Vlada drifts across the villa, a vision of feminine strength and serenity, emanating a wholehearted belief in cosmic interconnectedness, our power to will our dreams into reality, divine forces, the capacity to heal ourselves energetically. You either let her in, and lean into her spirit, or resist miserably and spend the week scowling. I say this because, well, one member of our group chose the latter path, and it was instructive to see, not least because I could absolutely identify, and would likely have been that person some years ago.

‘When Bliss Body Retreat proposes a week of detox, the word for once is not a euphemism for weight loss. It would have been easier, and frankly what I had wanted, to throw myself into bracing vinyasa flow and meagre diet. But the transformation being encouraged here operates on a different level’

In the all-female group were a Japanese cardiologist, a Montreal ex-pat living and working in South-East Asia as a raw food chef, a former casino employee on extended sabbatical, a French banker and a Belgian solicitor, and the blend was largely harmonious, in spite of spikes of intermittent frustration and tension from certain quarters. It was pretty fascinating hearing about the pressures of life in a Tokyo hospital, amongst other things, and intimacy was forged quite simply in the quiet acknowledgement that we were each subjecting ourselves to daily enemas. There was a lot of considerate exchange between women, which I valued.

It would have been hard to linger too long on negativity in any case, given the infectious warmth, generosity and sweetness of Olha, our resident raw chef, whose meals constituted the two main events of each day. There was much cooing and Instagramming at the presentation of her dishes – and whatever your disposition, how can you fail to be charmed by the imagination and silliness in bright pink dragonfruit granola or desserts with names like Scheherazade’s Dream Bliss Balls? 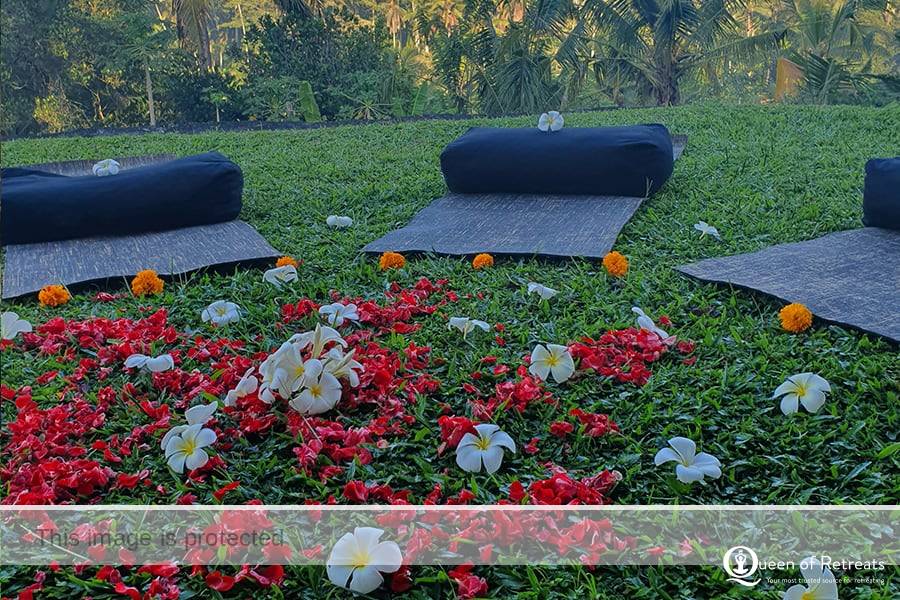 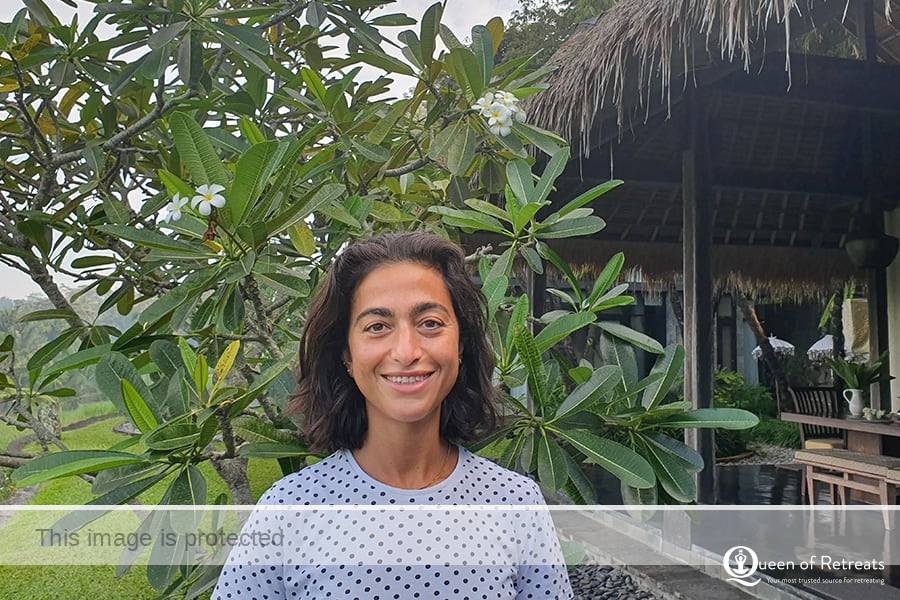 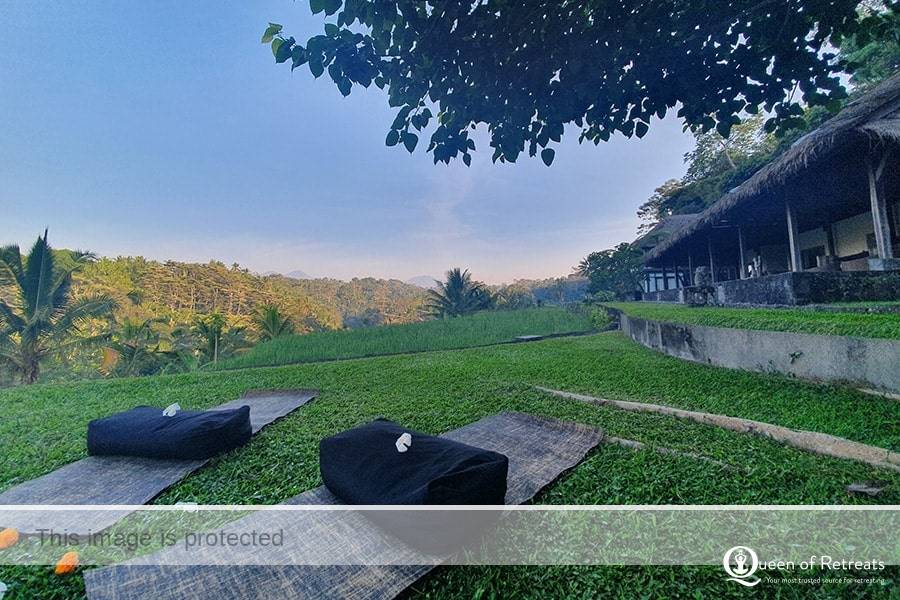 Either side of sumptuous and colourful raw banquets, days drifted lazily, with horizontal spells on sun loungers broken only by slow laps of the infinity pool, the scent of frangipani drifting on the breeze. At every turn, there was encouragement only to go slower and to go deeper. Yoga was not an opportunity for a workout. Expecting to sweat, I had packed several sets of gear – but I used only one. While exertion wasn’t evident on the surface, it occurred to me that I was working into some pretty stuck places, and easing loose tensions I didn’t know I had been holding in my body. Focus often returned to the sacral chakra, the seat of our sensuality and creativity, governed by the element of water and flow, and in giving myself over to Vlada’s faith in the power of that focus, I did find myself connecting more meaningfully than I had expected to that part of myself.

When Bliss Body Retreat proposes a week of detox, the word for once is not a euphemism for weight loss. It would have been easier, and frankly what I had wanted, to throw myself into bracing vinyasa flow and meagre diet. But the transformation being encouraged here operates on a different level. Bali feels steeped in the power of the elements, of water in particular, which resonated powerfully in my mind. I found myself continually returning to this idea – that detoxing is about loosening stuckness and allowing energy to flow freely, like water. On the penultimate day of the retreat, I had intense pain in my lumbar spine – what do you know, the site of the sacral chakra. As the pain peaked and then subsided, it really did feel as though Vlada’s methods had come good. Something major had shifted. Must be something in the water.