Learning to think differently at Being at the Cottage, Wales

Antonia Windsor reviews a private, empowering solo retreat in Wales for business leaders and finds a new way forward in her role as the artistic director of a theatre company.

In the synchronistic way these things often happen, this retreat found me. Out of the blue I had been offered the artistic directorship of a theatre company. An exciting prospect. But the company was a registered charity with no cashflow. So not something I could jump into lightly. I was sitting in my office thinking “I need to get away from the children and the tasks of daily life and think about this properly” when I came across the Being at the Cottage Retreat. It seemed to be just what I needed. Four days away in an isolated cottage in rural Wales accompanied by coaching. I jumped at it.

Once you have booked onto the retreat, Wilma, the lovely coach that runs it, makes contact straight away and schedules time for an initial one-hour conversation. It was a very enlightening chat and it quickly emerged that I had other issues I needed to unpick alongside the business one and that she was prepared to take a holistic approach. After just that first conversation I started to feel a change in the way I looked at and approached things, and I started to find it easier to make decisions. We then had a second chat, this time about money, which had an equally dramatic impact on how I began to look at various situations I was in, not just the question of whether to take on an unpaid role. By the time I arrived at the cottage a couple of months after booking it there had already been some real shifts in the way I was approaching my personal circumstances.

I was on a four-day Delve retreat, which you can set up on dates to suit you and which runs from Monday lunchtime until Friday morning. During the whole period you will have no access to your mobile phone or email. However there is a landline to make essential calls. I used the landline during my stay to find out if a mortgage I’d applied for had been approved and to call my husband and my mother to check in on them. Being without my email was one of my biggest concerns, but I put an out-of-office on which included the landline of the cottage, and nobody during the four days had a query that was urgent enough to compel them to call it. 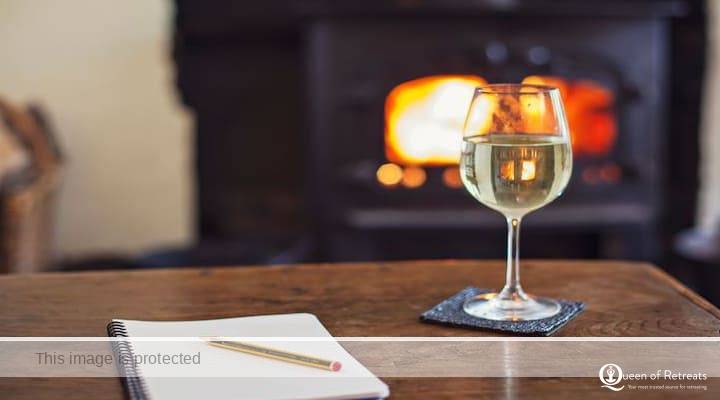 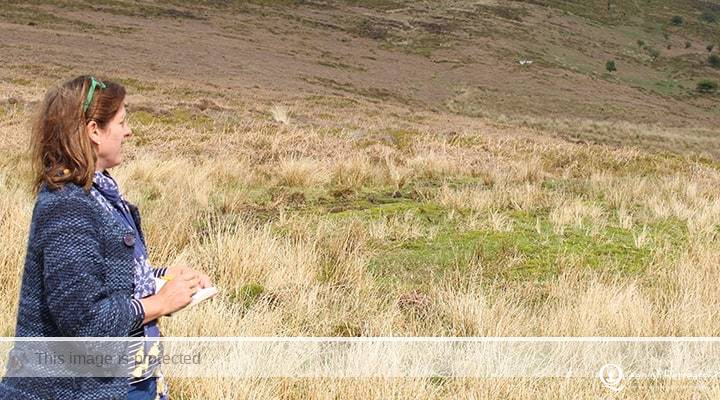 On my arrival I found the cottage larger than it looked on the website – it’s the sort of place I imagine Beatrix Potter lived in to write her children’s books. A yellow painted brick-built cottage with a gable roof and chimney and a lovely garden rising up the hillside outside. The rooms were cosy without being cramped, and there is a Rayburn warming the kitchen and a wood-burning stove in the living area. It was an immensely comfortable place to spend a few days, surrounded by trees and birdsong.

Wilma was there to greet me on my arrival – she has an arrival procedure in place which involves thinking about what you want from the process and entering the cottage with this in mind. She prepared a mint tea, a brownie, a notebook with my star sign on it and a singing bowl, and left them for me by a rocking chair in the porch. I sat and opened the notebook and wrote a few lines about what I wanted to gain from the four days: Clarity of mind. An ability to move forward and make bold decisions. A certainty about what the right choices are. I then tried to make the singing bowl sing – although at this point I couldn’t quite remember her instructions as she had written them in an email and I had handed over my tech! But those ten minutes helped me to destress from the journey and enter the cottage in a calm frame of mind (she had also sent out an email advising me to imagine throwing tenacious issues or annoying colleagues out of the window during the chauffeured journey from the station).

Wilma then showed me around the cottage and pointed out the various things to do: art materials in the drawer of an old wardrobe in the second bedroom, colouring pencils and books in the ottoman in the living room, notebook and pencils at the old school writing desk, binoculars and walking backpack hanging in the porch. She then left me to my own devices with an appointment to return after lunch the next day for our first coaching session.

That first evening I got out the art supplies and painted three paintings. The first was a watercolour that I consciously decided to paint: the sun setting on a seascape, which I was quite pleased with having not done any painting for about 20 years. The second I tried an abstract in acrylics which I wasn’t happy with and abandoned quite early. The third was to just use up the remaining paint. I decided to just dip two brushes in the paint and put them on the paper any which way, letting go of my conscious mind. I found the result was a painting that I was much more pleased with. I felt like I was making some progress towards letting my subconscious take over. I then tried some colouring while listening to a podcast of Eckart Tolle in conversation with Will Dyer and had an early night.

In the morning I took my notebook outside to a wrought-iron table in the garden along with a few books on theatre directing that I had had on my shelf at home for years. Surrounded by birdsong and without the distractions of phone and email, I managed to scan read two books and jot down plans for the company so I was in the right frame of mind when Wilma showed up for our coaching session.

Wilma has a gentle coaching manner, probing at things to help you uncover what you truly think about something. She believes that the answer already lies inside you and she is tasked with gently prying it out. We had our first conversation while striding out over the plateau that rises up above the house. It was an invigorating walk and great to literally get perspective by looking out over the wooded valley below and the neighbouring peaks. We talked about ways I could move the company forward and improve the cashflow as well as dipping in and out of personal concerns. Out in the open, far from city and tech, decision-making felt surprisingly easy. 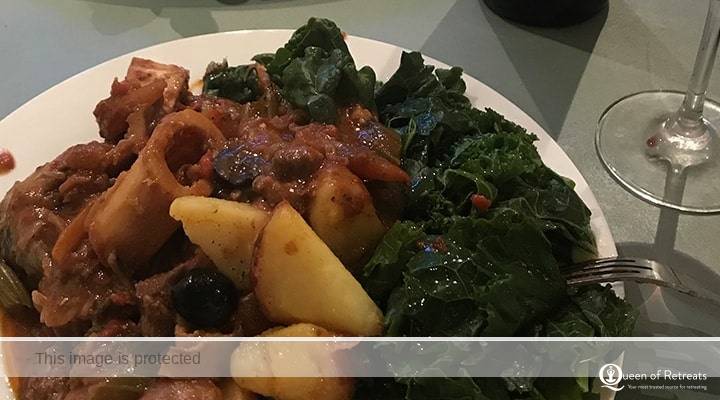 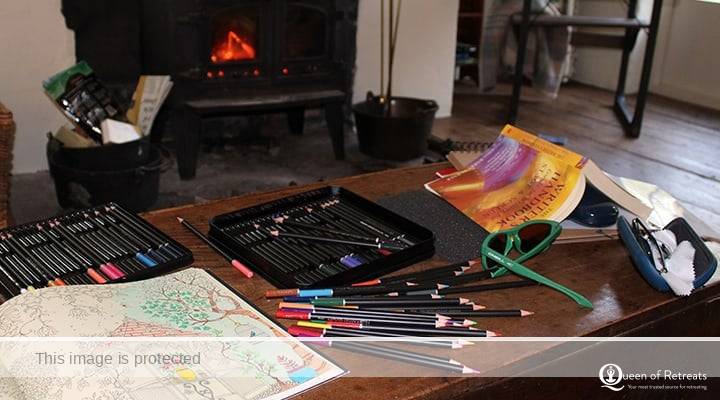 The next day I had a sound bath with sound healer Chrys Blanchard. It was a deeply hypnotic experience. I lay while she played a variety of gongs, singing bowls, instruments and even used her own voice. It brought me to a state of deep relaxation and allowed me to think of the essence of being away from the trappings of the self.

By the following day my second conversation with Wilma was much more practical and upbeat. Coming up with action plans, proposals and ideas to move things forward when returning home. I felt energised and raring to go.

Having three small children at home I thought that I might feel lonely staying in isolation for four days, but I didn’t at all. I found after the tetchiness of the first few hours I gradually settled into a more calm state of being and an easiness with the solitude. I filled the quiet evenings by starting work on writing a play and was amazed at being able to work for three hours straight without distractions. It has made me consider turning the wifi off on my computer for hours at a time, and having set times to check emails to limit the noise of constant communication.

Meal times were a joy as a whole week’s worth of delicious food was prepared for me and laid out in attractive dishes in the fridge and I ate while listening to selected podcasts on the cottage iPhone, which also has a selection of soothing music. Wilma had sent out a “food for thought” document ahead of my stay asking me to list my favourite dishes for breakfast lunch and dinner so I had a personalised menu. I loved the hearty stews with piles of organic kale and the bottle of red and white wine I had requested were both organic. I limited myself to just a single glass an evening because I didn’t want to be drunk alone!

I had said to Wilma in our very first conversation that I was hoping to get “unstuck”, and at the end of the retreat I felt like I had really made a profound shift in my thinking. I was almost tearful as I sat and wrote in the visitor’s book. I realised I had been deeply moved by my experience of being at the cottage. With Wilma’s gentle guidance and the creative tools she had left for me to explore I felt finally free of the fear that had been crippling me and preventing me from making big bold choices in my life and career. I was picked up by the same chauffeur who had brought there from Newport station and his jolly banter slowly brought me back to the real world.