Sasha Bates reviews this long time ayurveda resort in Sri Lanka and finds a beautiful, Sari-clad doctor, expert treatments, and a cure for her insomnia.

I now know exactly how a turkey feels before Christmas. I’ve been subject to such an elaborate preparation I cannot believe these lovely smiley Sri Lankan ladies aren’t fully intending to pop me in the oven any minute now while they uncork a nice bottle of Chardonnay. Those aprons they’re wearing – the ones I initially thought made them look like nurses – are suddenly looking a lot more like chefs’ whites, and I’m wondering if I should be feeling worried.

I arrived in Sri Lanka last night for my first ever ayurvedic experience. I was booked into Barberyn Reef in Beruwala on the West Coast, the first ayurvedic resort on this magical island, so I’m trusting I’m in good hands. And it all certainly started reassuringly enough. After a good night’s sleep, I negotiated my way out of my mosquito net, trotted obediently past the long, curvaceous swimming pool, and over to the clinic to meet with Dr Maadavi, my beautiful, Sari-clad doctor. It was to be the first of three consultations I would have with her over the course of my week here, so that she could keep careful check on my progress. 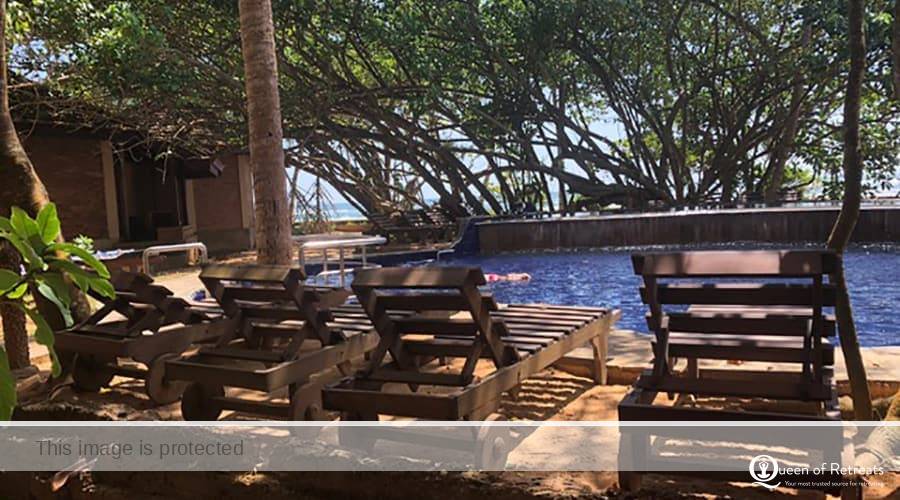 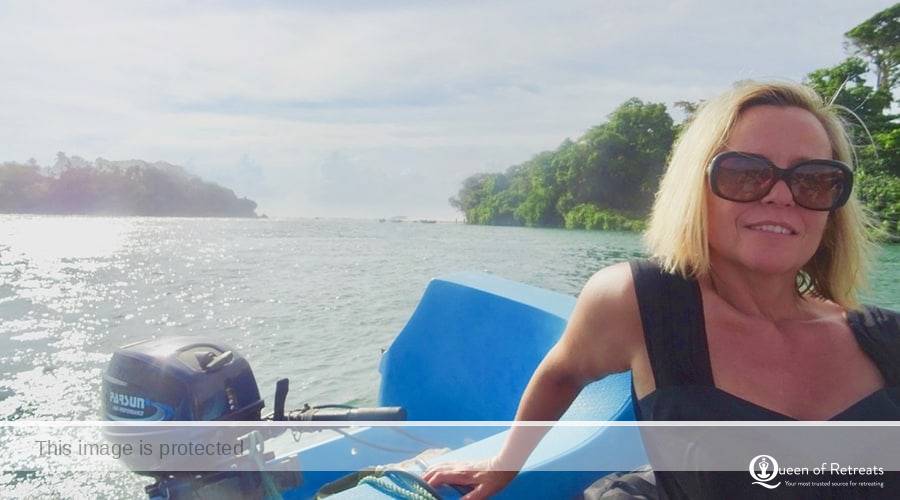 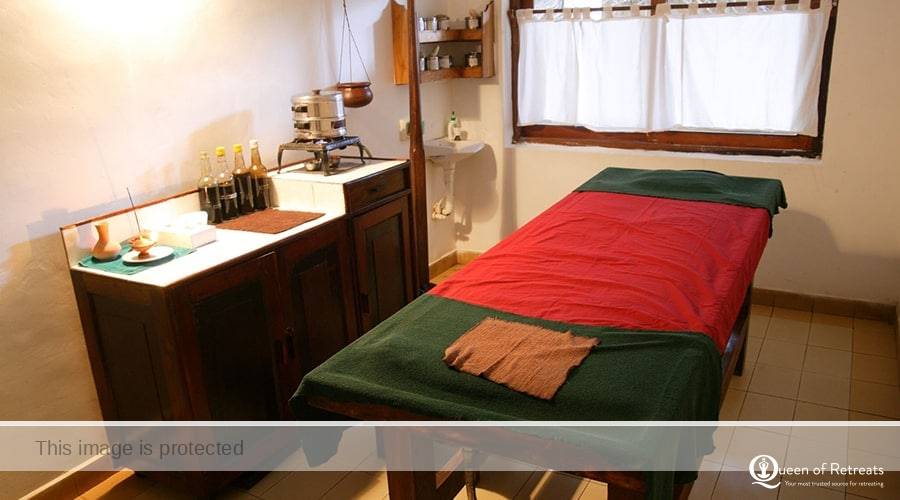 After taking a detailed medical history Dr Maadavi dispatched me into the welcoming hands of Priyanka and Chamari, the therapists who were to take care of me all week. The personal and individually tailored service here is wonderful, and I felt reassured by their professional, crisp white dresses, covered by a blue and white striped apron – an ensemble which reminded me mainly of those worn by the nurses in the Carry On films of the 70s. I was asked to strip to my knickers, then expertly wrapped in a green sarong: the ritual was about to begin. As I sat upright on a chair, Priyanka lit a flame beneath an ancient saucepan. She pounded, grinded and amalgamated the various oils and powders, as prescribed by the doctor. Concoction suitably warmed, she then rather touchingly performed a short prayer ceremony over the bowl, before tipping it all over my head. It was slightly alarming, but as I relaxed into the accompanying head massage I could tell I was in good hands.

Already a little spacey from this dreamy introduction, I floated my way to the bed, lay down, and started to drift off. I felt more oil being poured over my body then an odd sensation as I realised there were too many hands, how were both my legs being massaged at once? I cranked open an eye to see that Chamari had joined us again and they were working in absolute union to expertly massage the healing oils into every pore, so that I could pour myself into sleep. Insomnia, alongside aching joints and indigestion were the ailments I had asked the doctor to address, and on current evidence the former was being very well catered to.

‘The personal and individually tailored service here is wonderful, and I felt reassured by my therapists’ professional, crisp white dresses covered by blue and white striped aprons. I started to wonder – surely after this oiling, marinating and basting, my next destination can only be the oven? Mercifully it turned out not, but the steam bath that followed was not a million miles away from it.’

Massage done I was led, again by the hand, to a sweet smelling herb garden with tropical plants and a lotus flower strewn pond. Here strange multicoloured pastes were plastered to different parts of my body and held in place with, of all things, clingfilm. Supine once more, cucumbers were placed on my eyes and papaya smeared all over my face. A mini mosquito net that only covered my head and neck kept any pesky insects from taking a fancy to all that fruit.

The next stage was for me to get into a hot bath filled with a brown coloured liquid. I lay back while a third therapist ladled huge cupsful of this broth all over me with hypnotic, rhythmic strokes. And it is now I start to wonder – surely after this oiling, marinating and basting, my next destination can only be the oven? Mercifully it turns out not, but the steam bath that follows is not a million miles away from it. I stumble out of this heavenly cocoon of pampering to a more brutal treatment – the acupuncture. It’s well done, but I’ve never been a big fan of being stuck with needles. Once they are in however, I manage to, yet again, fall asleep. 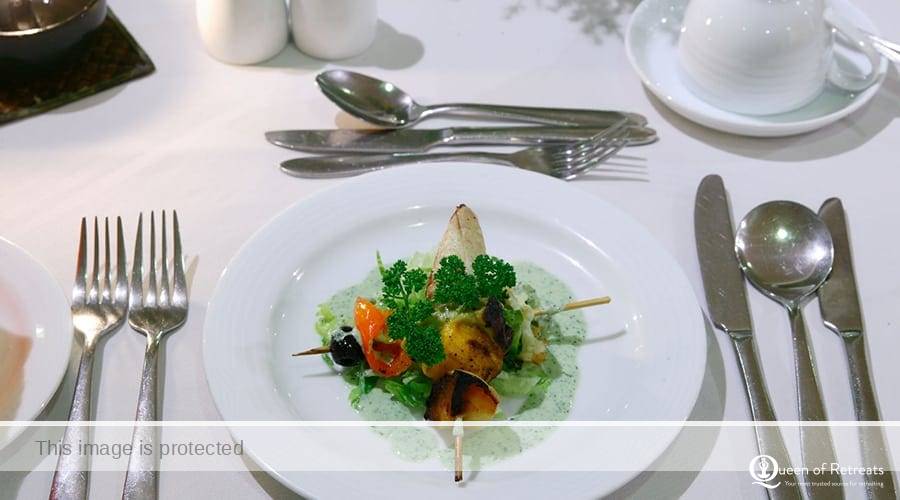 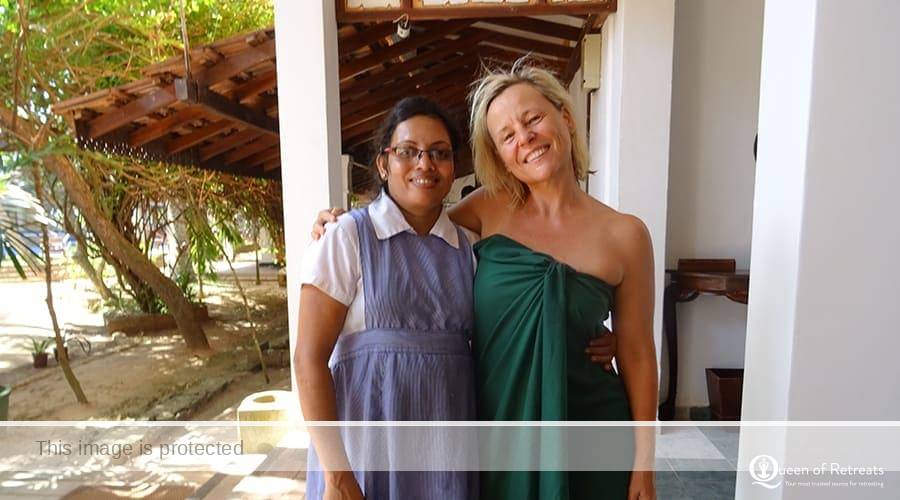 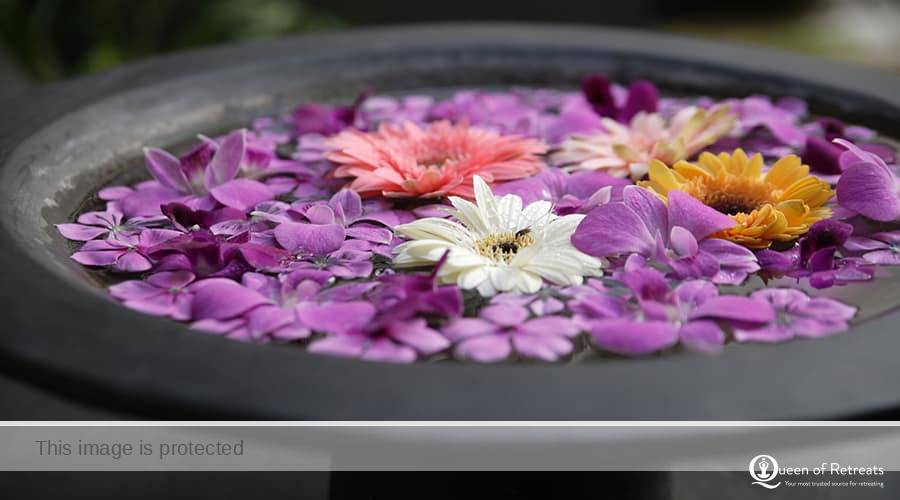 It’s all rather charming and, the occasional variation aside, this is how I pass my mornings at Barberyn. I take a yoga class and walk the length of the stunningly beautiful beach in the afternoons, swim in the golden light of the reliably astounding sunsets, and, less pleasantly, take the myriad remedies freshly ground for me and my ailments every day. All this, plus plenty of reading – including mugging up more on this, the oldest natural medical system in the world – and gorging on three very healthy, plentiful and tasty meals – makes for a very full but relaxing week. I haven’t met anyone – most guests come alone and keep themselves to themselves – but that’s fine by me, as the treatments completely exhaust me, and I am happy to be in bed almost as soon as the sun goes down.

By the end of the week I am 2 kilos lighter even without trying or being conscious of it, I am sleeping better, my joints ache less, my digestion is moving along marvelously, and I realise I just may be an Ayurvedic convert. If oiling, marinating and basting is what it takes to feel like this then I’m all for it.