A satisfying challenge at Azulfit retreat on Fuerteventura, Canary Islands

Imogen O’Rorke reviews a week-long retreat at Azulfit on Fuerteventura and finds dynamic yoga, well taught Stott Pilates, super food and quite the best Swedish massage she’s had in years.

People flock to Azulfit in Fuerteventura for a healthy break in the sun (which is almost guaranteed in the Canary Islands) and to get their fitness levels back up to par with the option of escaping to the beach if it all gets too intense. I was hoping to regain some of my pre-baby strength and flexibility in yoga – and to escape from the kids – within a small window of opportunity when my time would once again be my own. In that sense, Azulfit was a perfect fit, and even though the weather was unusually overcast for most of my week – a freak for Fuerteventura in June – it hardly seemed to matter.

On arrival at Surya Retreat up in the dry and dusty volcanic hills above Villaverde, I was a little concerned about its distance from the coast. My initial concerns were soon allayed by a swim in the pool, however, and a chill with a book in the garden amongst the cacti, succulent plants and bougainvillea.

I joined their signature Surya Retreat, a therapeutic week-long break which mixes dynamic yoga and Pilates. There were 14 of us, German, Dutch, Irish and British, all women between the ages of 25 and 60, and a mix of doctors, corporate executives, media production folk and working mums. 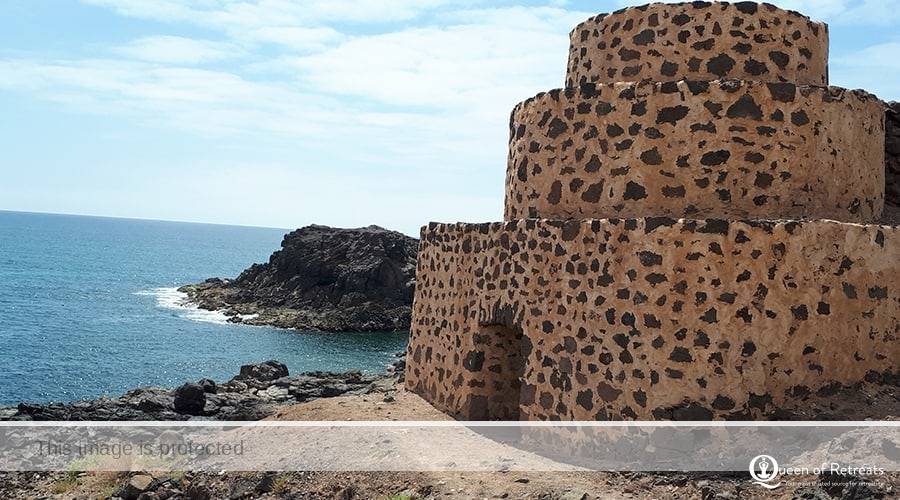 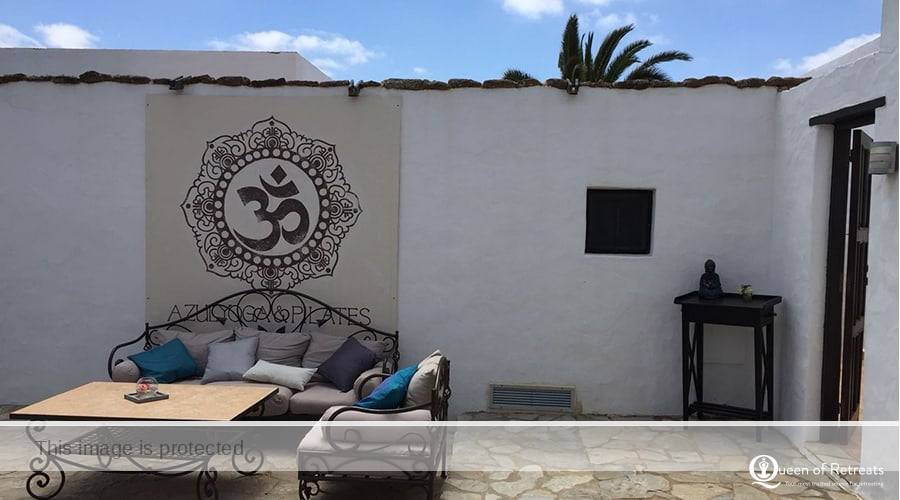 A relative newcomer to Pilates, I found the classes easy-to-follow and satisfyingly challenging thanks to given by Jo Dombernowski, Azulfit’s co-founder who is also a therapist and nutritionist. Her Stott-inspired prop-based exercises (which took place in their long, cool yoga studio) crunched abs, tortured thighs and martialled core muscles into shape prepared the body well for the dynamic yoga classes.

Azulfit’s resident yoga teacher Rachel Blunt was away training, but local teacher Adan de Miguel was excellent, mixing dynamic flow with poses from the renowned teacher Sri Dharma Mitra. There was more Pilates than yoga experience in my group – several were trying yoga for the first time – but the majority were able to follow Adan’s asanas without too many groans, creaks and collapses, and after the fast-paced Pilates, his softly-softly, in-the-flow approach to postures provided a pleasing counter-balance.

Feeling more adventurous by day three, two of us booked a private lesson with Adan to try out some of the more elusive Dharma Mitra inversions, which was fun and inspiring. Several of the other guests booked private Pilates lessons with Jo on the reformer machines (they have two), which they rated highly.

‘Yasmina was determined to scoop the last gobbet of tension out of my back and shoulders ingrained by four years of carrying babies and toddlers – I felt sheer, undiluted gratitude afterwards’

It was gratifying to find that the yogic philosophy at Azulfit went deeper than a cup of Pukka tea. Yoga classes on their signature retreats (which run almost every week of the year) include a little pranayama, meditation and Sanskrit chanting, which roots them in the ancient Indian sutras of Patanjali. We had four teachers over the week – each with different specialisms: Charlotte Mulvaney’s Yin yoga class provided the surrender and relaxation that we all sorely needed by the middle of the week, while Jigyasa Shiv, a local teacher who was trained at the world-famous Bihar School of Yoga, taught classical Indian yoga nidra (a led meditation designed to induce a state of conscious sleep) and chakra meditation for cleansing and energizing. Possessing a delicious sense of humor and a deep knowledge of her subject, we all felt Jigyasa had what it takes to become the island’s resident “Guru” (or Gurvi for the feminine).

Therapies are popular at Surya and although there are two private therapy rooms, you have to book a slot in quickly to avoid disappointment. I had a deeply relaxing massage with Johanna, who sent me away with tiny seeds plastered to my ears to work some auricular acupressure magic of sorts. I also tried a Swedish massage with Yasmina at Lotus (Azulfit’s sister retreat in the beach resort of Corralejo), which was quite the best one I’ve had in years. She was determined to scoop the last gobbet of tension out of my back and shoulders for me (ingrained by four years of carrying babies and toddlers). Yes, it was painful – and at times I felt like my bones might burst out of my skin – but I felt sheer, undiluted gratitude afterward. I also had a taster of a Japanese style facial, which involves death to wrinkles by the flaying of a thousand fingers. Marvelous stuff! 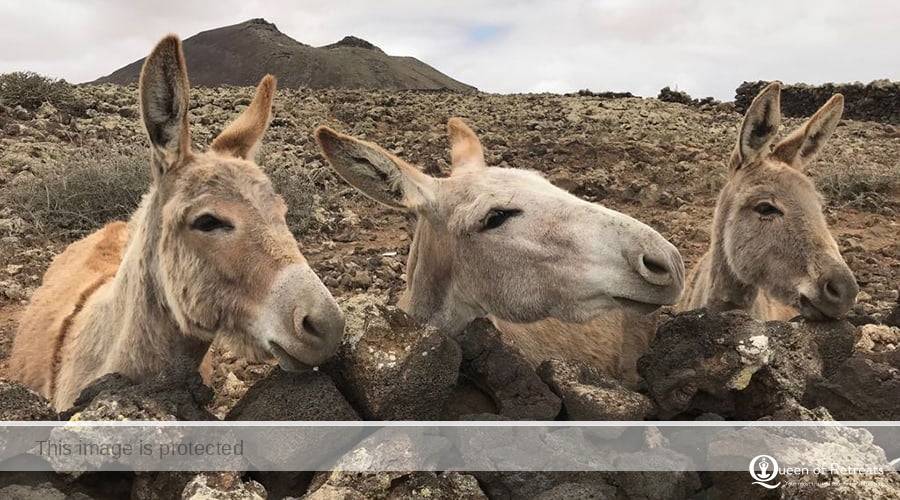 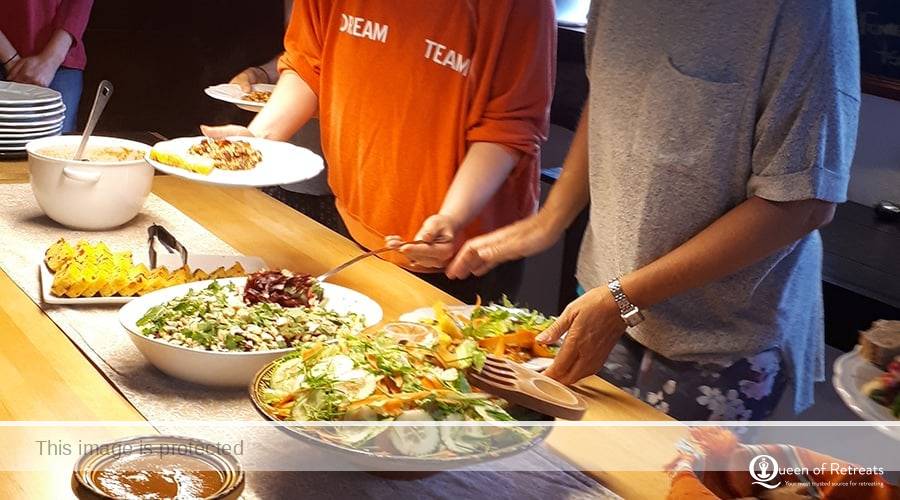 The meals at Surya, eaten in the communal dining room, deserve a special mention as they were truly delicious. All vegetarian (much of it vegan), the menu was designed by Azulfit co-founder, nutritionist and cookbook author Jo. Over the week we sampled traditional Spanish recipes like padron peppers, tortilla, and Canarian potatoes, mixed in with healthy whole grains, salads and raw food, hummus and pesto sauces and all homemade sourdough bread and cakes. The one meal we ate out at a rated local restaurant in Villaverde called Mahoh was good but unsubtle after the Satvic delights up at Surya and left a heavy feeling in the stomach. It was a reminder that by taking most of our meals inclusive, we weren’t missing out on much.

In the end, I didn’t feel much of an urge to leave Surya’s calm enclosure to go volcano-hiking, sightseeing, or even to hang out on the beach. Although it was beautiful, Waikiki’s white coral sands in Corralejo felt too touristy after the seclusion of the retreat. When I wasn’t on the mat, I was content to sit in the shade reading a book by the pool in Surya, although a number of the other guests braved the heat of the day to go hiking.

A week is the minimum amount of time recommended for a retreat at Surya. By the second or third day you’re just getting acclimatized, but by then there are only a handful of short days left for pool-lounging or making excursions. I’d stay for longer next time.