At ease in a timeless setting at Akasha Wellness Retreat, Romania

Zoe Ross reviews this wellbeing retreat in Transylvania and finds a timeless place full of dramatic vistas and birdsong for wellbeing, yoga and friendship

I was awed by what I found during my five days at Akasha Wellness Retreat in the heart of rural Romania. Nestled among rolling hills and meadows, with the dramatic backdrop of the Bucegi Mountains creating a cocoon of tranquillity, it’s a place where birds sing, cockerels crow, crickets hum. The setting truly gives you pause, and imbues the whole space with a sense of harmony. In fact, the highest mountain visible from the house is called Om Peak.

I learnt on the first day that barely a three-minute ramble from the main house takes you to a babbling stream, replete with grazing horses, meadow flowers and wild strawberries. These are timeless sights and smells and sounds, which set an agenda firmly unconnected to modern life. I found myself more than once standing transfixed by the two beautiful cows grazing the adjacent meadow, bells a-clinking, the soft jumble of farmyard noise all around – and I caught several other Akasha guests doing the same. 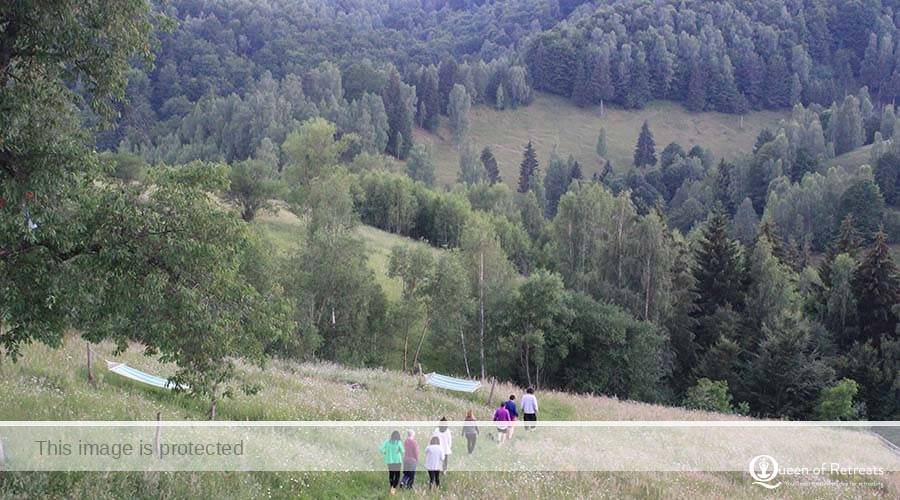 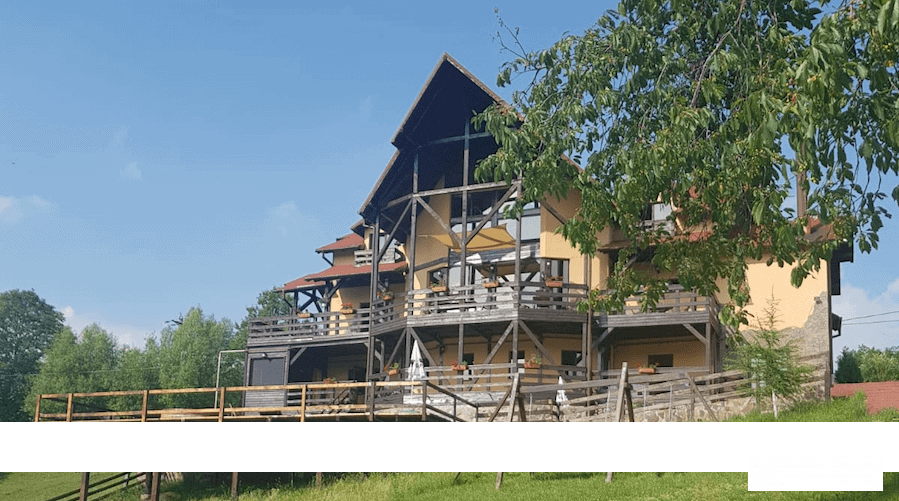 There’s an inevitable initial stiffness during the first phase of a retreat, and we were a large group, too. I wondered how things would play out. Our first evening yoga session felt uncomfortable for me – at one point we were encouraged to move freely with an imagined ball of energy between our hands, and I was internally squirming. We then had an ‘opening circle’ ceremony, where we introduced ourselves, and Daniela, the mother of the house, and Irina, her daughter, set the tone for the week to come. A bonfire and emotional sharing. Quite a plunge. But it dislodged something. The unabashed warmth, humour and connectedness of the team proved irresistible – and it was striking to cut through to the emotional narratives of the other guests.

There is true authenticity in Akasha’s mission to spread positive feeling and togetherness. The walls are adorned with positive slogans that my more cynical self might resist, and I don’t necessarily go in for hugs and heartfelt sentiment in group settings, but it all just felt so good. There’s no parsimony or preachiness here, more an encouragement simply to be.

‘Mother and daughter team Daniela and Irina have an ingenious way of establishing an atmosphere of ease, where everyone feels content in quietness, or in chatter and laughter at mealtimes’

Most days I found myself drifting dreamily through the lounge to scoop up a handful of cherries and a cup of ginger tea, feeling both energised and peaceful, while others snoozed or read cosily indoors, or lay out on the deck under the morning sun. Of the several outdoor nooks with swing-seats and hammocks, I identified my spot pretty quickly, and took up residence there at every opportunity. The weather happened to be glorious every day, for at least a few hours – I couldn’t believe my luck as I drifted in the breeze, looking out over my inexpertly painted toes onto the green hills and mountains beyond. Things got even better when I finally mastered not falling out of the hammock, too.

Daniela and Irina have an ingenious way of establishing an atmosphere of ease, where everyone feels content in quietness, or indeed in chatter and laughter at mealtimes. I was genuinely amazed that a group of 15 people could feel so comfortable together so effortlessly. I was told it was a fairly atypical group, with several Americans apparently bucking the usually more Eurocentric trend. There were three couples in their thirties, a French museum curator, German marketers, an engineer, a British doctor, a Swiss flight attendant, and a pair of sisters who’d quit their jobs and were on an open-ended adventure. I wonder if the retreat attracts slightly more open-minded guests, given that Romania is (at least for now) a less obvious holiday destination. Daniela brought up her children in the UK, and opening the retreat in November 2017 marked a huge transition in her family’s life, essentially bringing them ‘home’ to Romania. The desire to share the soul of the country with her guests is, I think, a large part of what drives her. 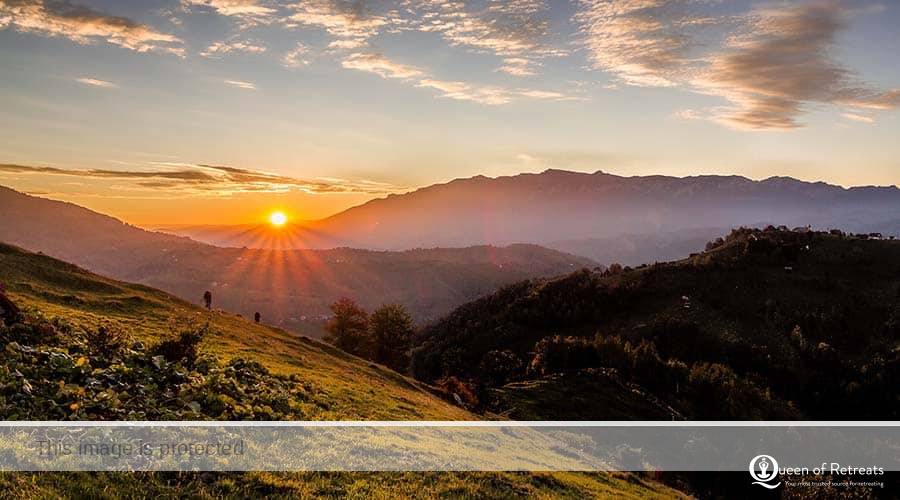 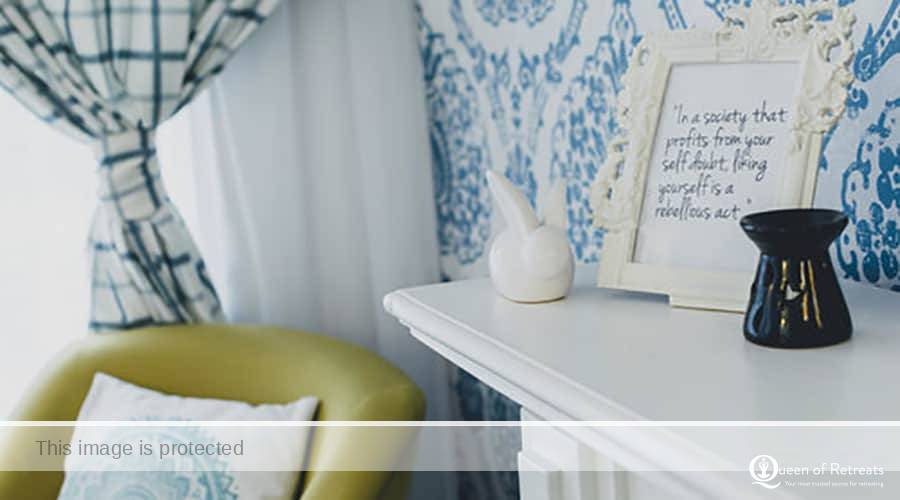 Yoga teachers at Akasha are on a three-month rotation, and we were lucky to be taught by Anna Loveridge, whose energy added so much playfulness and fun to our classes. Her line in vintage Naf Naf dungarees was also highly impressive. Initially I felt a touch frustrated by the fact that most people in the group were beginners, and had been hoping for more rigorous ashtanga practice in the mornings, as advertised. Nonetheless, the yoga was satisfying enough – the sequences evolved through the course of the week, so there was a real sense of progression. Alongside our daily morning and evening practice, there were mid-morning workshops, giving space to experiment with headstands, for example, or to focus on alignment.

I’m genuinely delighted to have discovered this new corner of the world. Akasha isn’t a place for deluxe spa treatments or slick five-star pampering, but honestly I think it’s all the better for it. It’s a place to be in nature, to let go, to eat well, and to experience warmth and total relaxation in the care of wonderful hosts.